Tom Brady will go down in history as the greatest quarterback of modern times. A first-ballot Hall of Fame lock with more Super Bowl rings than anybody else ever. Part of what makes him so great is his consistency. The guy keeps his play elevated at all times. That is why he is difficult to beat, regardless of the regular season or playoffs.

The Chicago Bears understand this well. Across almost two decades, the team had failed time and again to topple the living legend. Prior to Thursday night at Soldier Field, they were 0-5 against Brady. Then, with a big assist from his Super Bowl foil Nick Foles, the team managed to finally get him on their sixth try. A nail-biting 20-19 triumph.

Yet the craziest thing about that game wasn’t finally conquering Brady. It was how they did it. Most people remember the finish. They tend to forget the start. For the first 25 minutes of the opening half, Tampa Bay was in total control. Chicago’s offense couldn’t gain any traction and the Bucs rolled to a 13-0 lead. The smell of a blowout was in the air.

Then a big drive by Foles followed by a huge turnover forced by Kyle Fuller led to a quick 14 points by the Bears, taking the lead at halftime. After the game ended in victory, nobody realized Chicago had made history. ESPN discovered this crazy stat about Brady. 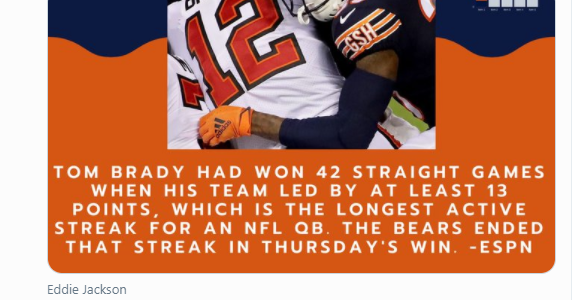 Tom Brady was a machine and the Bears shut him down

People talk about comebacks and stuff like that when referencing the greatness of quarterbacks. Not enough attention gets paid to those who are great at protecting the leads they’ve built. Nobody was better at that than Brady. He was a master of jumping out in front early and then going on long drives that ended in points to keep the opponent at bay.

This time he ran out of magic. The Bears needed less than four minutes to erase the lead he’d built and Brady was never able to pull away after that. Khalil Mack and the defense hounded him the entire second half. Enough to where he lost track of which down it was on the final drive, leading to an incompletion on 4th that ended the game.

It was a huge win for Chicago. The fact they made history in the process makes it all the sweeter.