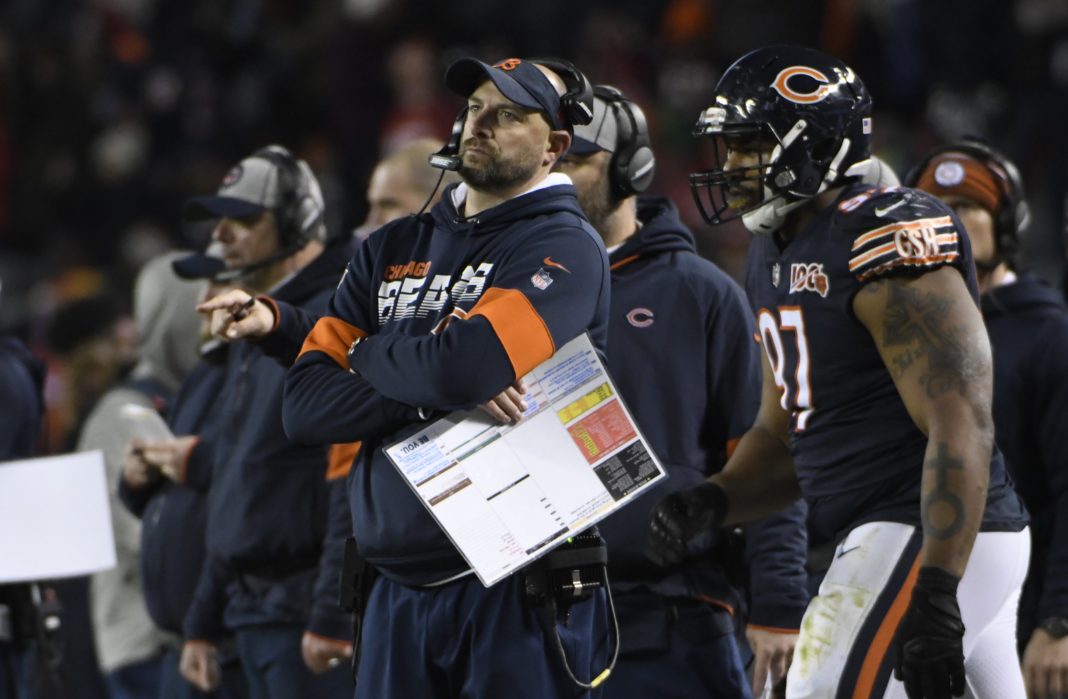 The Chicago Bears will host the Tampa Bay Buccaneers on Thursday Night as the team looks to rebound from an ugly loss to the Indianapolis Colts this past Sunday. Quarterback Nick Foles failed to impress in his first start as a Chicago Bear as the offense scored only three points for the majority of the game. Head coach Matt Nagy has taken a lot of deserved criticism for his offensive play-calling, but the play of his quarterbacks has been alarming at times, something he was heralded for improving when hired as the head coach.

When the Bears hired Nagy in January of 2018, he came from the Kansas City Chiefs, where he was the team’s offensive coordinator for the final five games of the 2017 season. Before being promoted to the coordinator’s role, he had served as the Chiefs’ quarterbacks coach for two seasons from 2016 and 2017. Many credit Nagy for helping Chiefs’ quarterback Alex Smith improve his play. Smith made the Pro-Bowl in both seasons with the quarterbacks’ coach.

Matt Nagy has groomed some impressive quarterbacks, but which QB would you rather have for the next 5 seasons?

The role of a quarterbacks’ coach is to make sure that the quarterback not only has the proper throwing mechanics but also is ready with the playbook. Trubisky, Chase Daniel, and Nick Foles have all had games with the Bears in which they looked visibly confused and inaccurate.

Bears coach Matt Nagy says holding an opponent to 19 points should win you a game.

In the game against the Colts on Sunday, Foles had a completion percentage of 61 percent and a quarterback rating of 76.4. Before the team’s final drive, which resulted in a touchdown, the Bears’ quarterback had only passed for 159 yards on the day. Of the 159 passing yards, 60 came on two consecutive passes in the second quarter.

Last week, Trubisky was replaced due to his inability to complete downfield throws and not properly reading defensive coverages. Last season, the Bears’ third-year quarterback oversaw an offense that failed to score a first-half touchdown in nine games. Trubisky also had battled issues with his throwing mechanics during his three seasons with Nagy.

With blocking like this on screens, who even needs a running game? /s

The #Bears attempts at screen passes were way too reminiscent of the 2019 offense and they've gotta get better. 6 yards on a WR screen is a WCO staple, you can't burn downs like these and expect to succeed. pic.twitter.com/02HeV7Lsad

In 2018 and 2019, Daniel started three games for the Bears, and his play declined with every start. After his 2018 Thanksgiving day start, in which he posted a quarterback rating of 106, the Bears backup posted a quarterback rating of 75.3 the following week in a loss to the New York Giants. In Daniel’s lone start last season, the Bears offense failed to score a touchdown in the first half and was intercepted twice in a loss against the Oakland Raiders.

Chase Daniel is having an awful half throwing. Wobbly throws. Off the mark. Not leading receivers. Ogletree with two interceptions pic.twitter.com/JHcmDRt7OQ

The problem with the Bears’ quarterback struggles is that two of the three quarterbacks have worked with Nagy during his time in Kansas City. Daniel and Foles both spent time with the Chiefs in 2016 and 2017 and are very familiar with the Run-Pass Option offense. Nagy targeted both quarterbacks for knowing his offense, which is even more troubling because bad games like Sunday’s against the Colts shouldn’t be happening.

Bears fans have a prime example of how an effective quarterbacks coach gets his quarterback ready, as was the case in 2016 with offensive coordinator Dowell Loggains. When starter Jay Cutler went down with a thumb injury, the team turned to backup Brian Hoyer, who performed well in six games. Hoyer, who had worked with Loggains before 2016, passed for over 300-yards in four of his starts. The Bears offense averaged over 18 points during those starts, seven points more than what the Bears scored on Sunday.

Nagy, a former quarterback himself, has failed to get consistent quality play from his quarterbacks. The responsibility of a quarterbacks coach is to make sure the quarterback is fully prepared to run the offense and know where to go with the ball. This past Sunday, Foles’ play was a letdown, something that has unfortunately been seen by all Bears quarterbacks under Nagy.