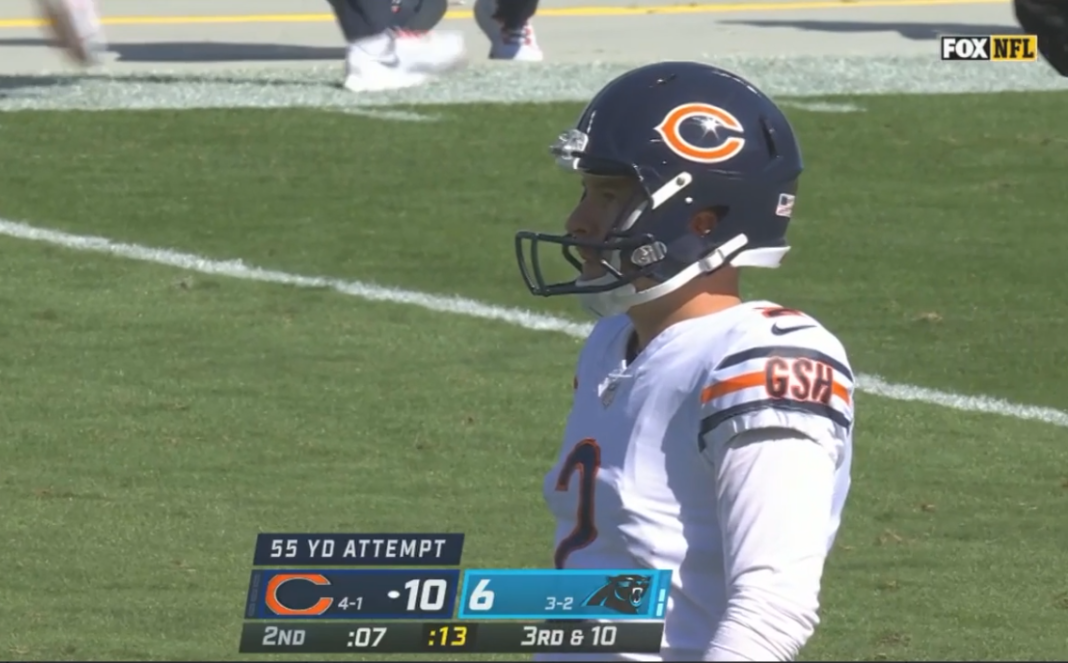 Why can’t the Chicago Bears find kickers the normal way? For those who don’t understand. Here’s a quick recap. They traded for Eddy Pineiro last season. He became the starter and had a decent year with an 84.0% field goal accuracy rate. Then this offseason he suffers a groin injury that knocks him out of action. In an emergency, they sign veteran Cairo Santos who hit just 4-of-9 field goals last year.

Nobody expected anything out of the 28-year old. Now through eight games, he’s converted 10-of-12 field goal attempts including a 47-yarder and a game-winning 38-yarder against Tampa Bay. Not to be outdone, he nailed a 55-yarder in Carolina against the Panthers on Sunday. His new career-long.

Anybody who thinks he isn’t going to be the starter moving forward is fooling themselves. It sucks for Pineiro but that is the nature of the NFL. If you get hurt, you run the risk of losing your job to somebody else. It happens all the time. The Bears should know. They’ve seen this scenario play out before. At kicker too.

Back in 2005, they went into the season with veteran Doug Brien as their starter. However, in early October he suffered a back injury. This forced the team to scour the market for help. They settled on a young rookie from Penn State named Robbie Gould.

Safe to say that twist of fate worked out pretty well.

This kid traveled a long road to the NFL. Born in Brazil, he lived in the heart of soccer country. Not until he moved to Florida was he made aware of American football. He gave it a shot in high school and did enough to earn a scholarship at Tulane. This led to him signing as an undrafted free agent in 2014 with the Kansas City Chiefs. He quickly became their starter and ascended to one of the best kickers in the league by 2016.

All of that changes early in 2017. A groin injury hampered him to start the season and eventually, he was placed on injured reserve. There the Chiefs unceremoniously cut him. From there he bounced around the league for the next few years going to Chicago, New York, Los Angeles, Tampa Bay, and Tennessee.

He just couldn’t seem to find his old stroke

Then he got a call from an old friend. Matt Nagy was with the Chiefs when Santos first arrived in the league. The Bears head coach knew what the young man was capable of and Chicago needed some veteran depth at kicker. With Pineiro ailing from his own groin injury, he stepped into the starting job expected to keep the seat warm.

Instead after six games, he’s made it his own. This is shaping into quite a career turnaround for Cairo Santos. It’s also rather fitting this is how the Bears may have finally solved their kicker issues. In the same fashion they found Gould 15 years ago.