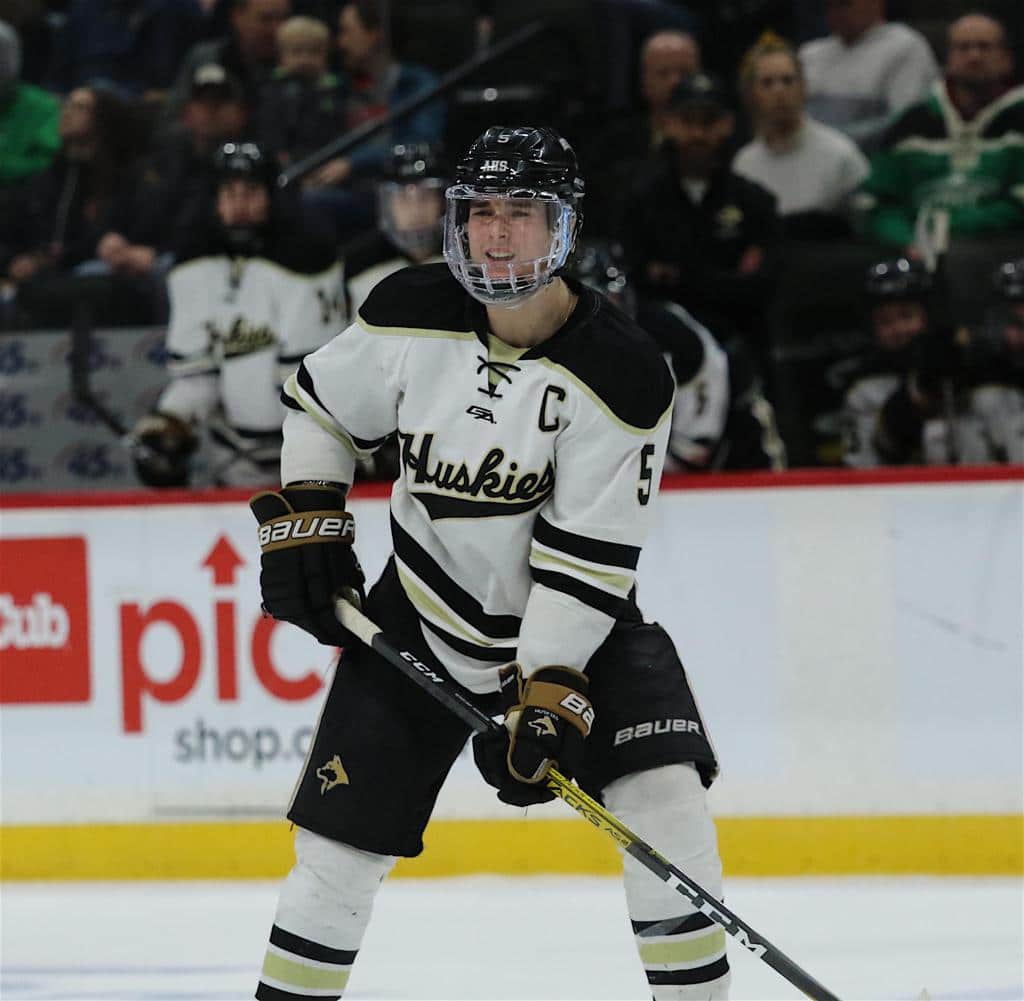 Kaiser, an 18-year-old left-handed defenseman, won Minnesota’s Reed Larson Award for top defender in the state during his senior season of high school.

The Chicago Blackhawks selected defenseman Wyatt Kaiser with the 81st overall pick in the 2020 NHL Draft on Wednesday. Kaiser spent the majority of 2019-20 wrapping up his high-school career with the Andover Huskies in Minnesota before joining the Dubuque Fighting Saints of the USHL for 11 games towards the end of the year.

In his final 31 games with Andover, Kaiser amassed 11 goals and 32 assists for 43 points while serving as team captain. The 5-foot-11, 170-pound blueliner sadly had his senior season cut short after the Huskies were upset in the first round of the state tournament. Kaiser went on to add three assists in 11 games while playing for Dubuque in the USHL.

Kaiser, currently a freshman at the University of Minnesota-Duluth, is considered one of the best skating defensemen in the 2020 NHL Draft. He is a fluid skater in all directions and can cover a ton of ice with just a couple of strides. Kaiser can easily recover in transition and has the speed to disrupt odd-man rushes for the opponent.

Because of his remarkable skating ability, NHL Central Scouting compared Kaiser to Blackhawks two-time Norris Trophy winner Duncan Keith. Of course, that is simply a comparison to their styles of play, but there are a lot of similarities between the two that should make Blackhawks fans excited for Kaiser’s future.

Like Keith, Kaiser is known as a reliable two-way defender that can also chip in on the offensive side of things. Kaiser is not afraid of getting active in the offensive zone and will often drop down below the circles to keep plays alive. He also can break up a pass in the neutral zone and be on the counterattack immediately. Sound familiar, Chicago?

Look, Wyatt Kaiser is not Duncan Keith, but he has all the tools to be a solid NHL defenseman down the line. Kaiser is expected to spend a couple of seasons at the University of Minnesota-Duluth to get stronger and gain valuable experience. The 81st pick in the 2020 NHL Draft could be NHL ready by the beginning of 2022-23, but 2023-24 is more realistic.