Home Chicago White Sox Back In Black? Why Re-Signing James McCann Is Unlikely 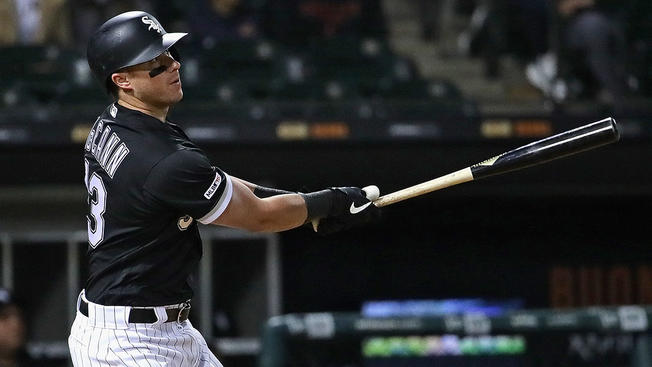 James McCann has been a key cog in the White Sox clubhouse. While fans and teammates alike would love to see him return next year, a deeper dive into his numbers suggest that the White Sox would be wise to let him walk.

The Case for Re-signing McCann

Rick Hahn rolled the dice by pulling James McCann off the scrap heap during the 2019 offseason. The gamble has paid off. McCann has revitalized his career during his two-year stint with the White Sox.

In 2019 he made his first career All-star game appearance and posted career highs in homeruns, RBI and batting average. In 2020 he was reduced to a backup role and still made the most of his time in the box. He hit .289 with seven home runs in only 31 games played. That was enough to put him on track for 26 during a normal 162 game season.

But his presence has not been limited to offense. He has helped guide Lucas Giolito, development and playing a major role in his no-hitter earlier this season. A game in which Giolito only shook off McCann once. The White Sox only postseason win came when he was behind the plate.

Don’t just take my word for it. Here is what Giolito had to say about his catcher back in September.

“Mac, we call him ‘The Captain.’ One of the leaders of our team, vocally and by example whenever he gets in the game, he’s locked in. He knows what he has to do to be able to manage the pitcher he has on the mound, be able to manage his at-bats, give us quality ABs no matter where he’s hitting or no matter how often he’s playing. ”

That is very high praise from the ace of the staff.

Re- singing should be a no brainer right? Not so fast.

Even though McCann has been good for the White Sox there are some red flags that stick out. For starters, while McCann had an unbelievable first half to the 2019 season, his second half was not as productive. He hit .226 dropping his average .90 points. His career average is .249 which suggests that McCann’s hot start to the season was an outlier not the norm.

His splits against right handed pitchers are also alarming. While McCann dominates lefties he only has a .238/.282/.385 slash line against righties.

Defensively there is some cause for concern as well. For his career he is below the major league average in defensive runs saved. In 2019 he ranked third in the American League in errors by a catcher.

His limited postseason numbers do not jump off the page either. During the 2020 postseason, McCann could only muster one hit in seven plate appearances. His fellow catcher on the roster, Yasmani Grandal, hit two home runs and drew four walks to matching his RBI total for the series.

Roadblocks To Bringing McCann Back

Despite some of his flaws the White Sox would love to bring McCann back. The free agent market will be uncertain after the strange 2020 season. If the White Sox can get McCann for a discount it would be worth every penny. With McCann as a backup catcher the White Sox own arguably the best catching duo in the MLB. However there are some things standing in the way of a Southside reunion.

While his numbers did not jump off the page in 2020, he put together a solid season for the White Sox. He had a .351 on-base percentage that trailed only Jose Abreu and Tim Anderson. Grandal also drove in the fourth most runs on the team, was sixth in home runs and led the team in walks. Drawing walks is not something the White Sox excel at so having Grandal in the lineup is luxury. He is also a better defensive catcher than McCann. Grandal is a superior pitch framer and according to Fangraphs he was the second best overall catcher in baseball.

Seeing that Grandal has the number one catcher’s spot locked up for the next half decade it would not make sense to pay a backup catcher the starting salary McCann has earned, only to see him spend the majority of his time on the bench.

The White Sox logjam DH further complicates things.  When Grandal is in the lineup the only other way McCann can be worked in, is the designated hitter slot. However the White Sox top ranked prospect Andrew Vaugh is knocking on the door of the major leagues. He will most spend the majority of his time split time as the designated hitter. When he is not in the DH spot, Jose Abreu figures to fill that hole in the lineup. It is hard to justify keeping the American League MVP frontrunners out of the lineup, which spells no room for McCann.

With other suitors in need of a catcher this offseason, it would be hard to justify paying top dollar for another catcher when the White Sox have other holes on the roster that need to be patched up. Re-signing McCann takes away valuable money that could be used on an upgrade in right field or starting pitching depth.