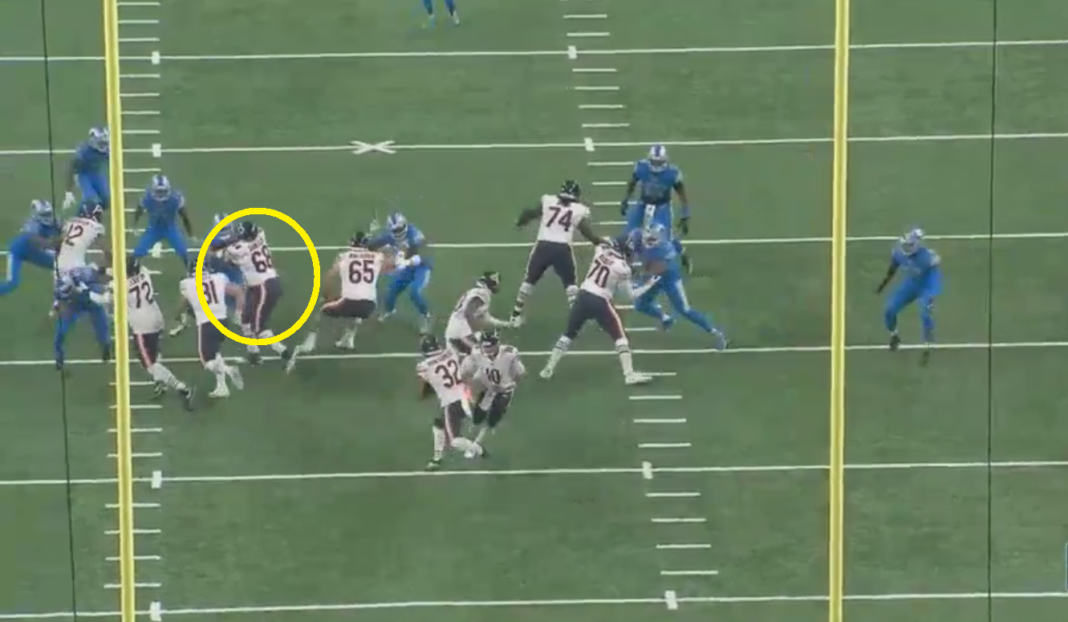 The biggest surprise of the Chicago Bears’ week one victory in Detroit had to be their offensive line. People had rough memories of how the unit looked in 2019. Their pass protection was spotty and their run blocking was a joke. It was a big reason the team fired line coach Harry Hiestand and replaced him with Juan Castillo. He had a tough job ahead since he’d be dealing with almost the exact same unit as last season. Guys like Cody Whitehair and James Daniels would just have to step up.

When reviewing some of the tape from the game on Sunday? It became clear that Daniels was one of the biggest standouts. The 23-year old guard arrived in training camp having noticeably bulked up his physique. It was clear he had big goals in mind for 2020 and that played out on a number of occasions against the Lions.

James Daniels wasn’t perfect but he was damn good

This is the first play of the game. Daniels drives the defensive tackle out of the lane with good technique and strength, allowing David Montgomery to get six yards

This next play demonstrates how deceptively agile Daniels is. He pulls to the right on this play and perfectly picks up the free Lions defense, sealing off the lane for Tarik Cohen who goes for 16 yards right up the middle.

See #71? That is Danny Shelton. The Lions defensive tackle is a full load at 345 lbs. Moving a guy of that size is not easy. A key reason Detroit signed him. Daniels is able to drive him off the ball and out of the play, allowing Montgomery to get another nice gain.

It wasn’t just run blocking with the young guard. His pass protection stood out as well. This was one of the pivotal plays of the game. Trubisky takes the snap and waits for Allen Robinson’s route to develop. Daniels gets right in front of Shelton and is able to set and reset his feet, keeping the pocket clean long enough for Trubisky to make the throw for 22 yards.

Blocking for Trubisky isn’t always easy. Partly because he tends to hold the ball a lot. This play is a perfect example. The QB can’t find anybody open, so he starts moving around and scramble until finally taking off for 20 yards. Watch how Daniels engages and controls the defensive tackle for six full seconds before Mitch finally takes off. He never let up.

The Lions try to catch the Bears with a stunt here.

Now Daniels wasn’t a hero or anything on this play but it is the pivotal moment of the game. It also shows what good offensive linemen are taught. If there is nobody for you to initially block? Go find somebody. Daniels is left alone on the snap, so instead of staying put he goes straight for Leno’s assignment and smacks him right in the mouth when the guy tries to twist back inside.

All in all, it was a strong afternoon for James Daniels. The Bears need him to really step up this season and start playing like the star they feel he can be. He’ll have much bigger tests ahead of him in the weeks to come. Still, this offers encouraging signs that he’s ready to take the leap.