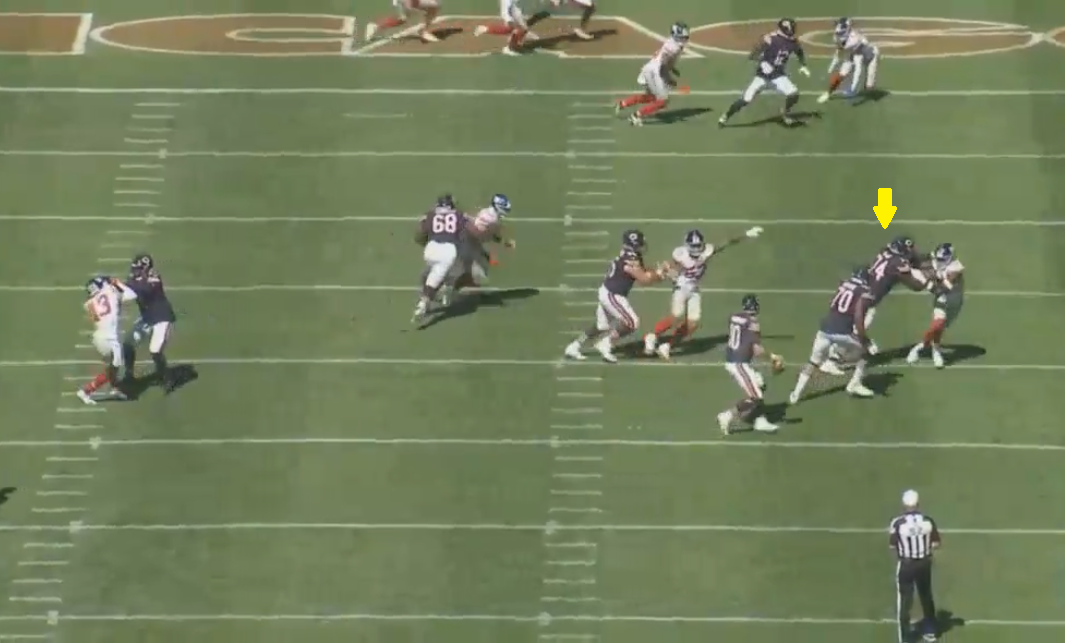 A lot of people were skeptical when the Chicago Bears signed Germain Ifedi. With several proven guards available in free agency, they decided to sign a former 1st round pick who’d spent the past three seasons as a right tackle to a veteran minimum deal. This guy was supposed to be the successor to Kyle Long? That was hard to accept. It felt like the team was being a little too cheap for their own good.

GM Ryan Pace defended the decision. He stated they had liked Ifedi going all the way back to the 2016 draft. However, unlike Seattle, they’d always seen him as more of a guard. Something the player himself agreed with. Offensive line coach Juan Castillo was reportedly a big fan as well. The Bears felt they were putting a 1st round talent back in his best position to succeed.

Based on some of the recent tape through the first two weeks? They may have known what they were doing after all. Check out some of his work against the New York Giants.

Germain Ifedi is proving to be quite the bargain

Understand here that Ifedi doesn’t have any sort of leverage. As the line shift right on the outside zone run, he has to get #99 Leonard Williams to overrun his assigned gap, allowing Patterson a nice cutback lane. How does he do this? By literally grabbing him by the shoulder pads and almost throwing him in that direction. Keep in mind Williams is over 300 lbs. For Ifedi to do that shows just how strong he is.

One thing the Bears offensive line didn’t have enough of last season was attitude. A nasty edge to the way they played. Ifedi brings some of that and this is a good example. New York brings a three-man rush, hoping for Mitch Trubisky to try fitting the ball into tight coverage or just check it down. The guard doesn’t get anybody to block at the start, so he goes out of his way to find somebody. Lorenzo Carter (#59) is the unfortunate choice as Ifedi bullies him into the turf, allowing Mitch time to find Darnell Mooney for a TD.

Never take the good, old 4-yard runs for granted. Coaches say they’ll take those all day long. There is nothing subtle about this play. Ifedi has one job. Drive his assigned defender out of the assigned running lane. In this case, it’s #95 B.J. Hill. The Bears guard lays into him with a strong initial punch, driving the defensive tackle well away from the play and then just for good measure pancaked him into the Soldier Field turf.

Here’s another play that demonstrates how strong Germain Ifedi is just in his upper body. It’s a play quite similar to the first one. The Bears flow to the right and he has to get Williams to again out of the lane. This time Ifedi changes his approach ever so slightly. He manages to hook his left arm under Williams’ right and uses that to almost lift the defensive tackle in that direction. Williams loses his balance and can’t recover in time to stop Patterson from grabbing another six yards.

This was arguably the most pivotal drive of the game. The Bears had watched their 17-0 lead become 17-13. Without some kind of sustained drive, they were dead in the water. Then on the first play, they get Montgomery to go for an instant 11 yards. This play demonstrates less Ifedi’s power and more his strong fundamentals and sneaky nimbleness. He’s able to get across the face of #94 Dalvin Tomlinson and turn him away just another to seal the hole for the Bears running back to charge through.