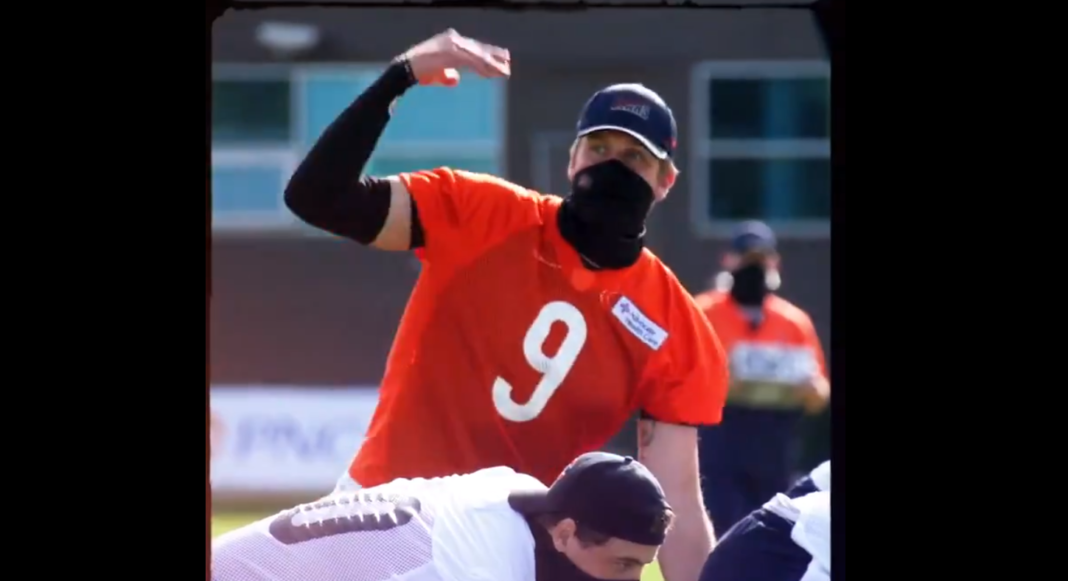 The realities of COVID-19 have really started to hit home in the past couple of weeks. Several players have chosen to opt out of the 2020 NFL season. That means they will not see a field again until next season. Eddie Goldman was among them. This gave rise to fears that more Chicago Bears could follow. Among them being recently acquired quarterback Nick Foles.

It wasn’t hard to imagine. The 31-year old just had another baby two months ago. He also has a toddler daughter. One can imagine he’d have concerns about the virus impacting them. For a time there was a rumor that Foles planned to do just that. It was however quickly squashed.

When given a chance to answer those questions, the QB made it clear he’d spoken with his family about it. There was never any danger of him opting out. A big reason for that was his recent visits to Halas Hall, recently upgraded with all the latest tech to help combat the spread of infection.

“My wife and I both felt strongly about pursuing playing this season. There was never a discussion about opting out. When that came out, you have those discussions about different things. I get it. I have a 7-week-old son. My wife and I went through a miscarriage last year. We have a 3-year old daughter. So you have to weigh those different things…

…It’s just one of those things where my wife and I both felt great about pursuing being in Chicago and being here. After being at the facility and seeing how much care they’ve put into everything, it really is amazing how safe they make us feel here. How everything’s separated…It’s been really impressive to see what the Bears have in place for us.”

One person who probably wasn’t surprised by Foles’ reaction was Ryan Pace. He stated with a degree of confidence that players would feel more comfortable about practicing at the facility once they saw all the lengths the team has gone to in order to ensure their safety. This statement is validation in that confidence. Thus far no other Bears player has chosen that course of action. So it gives one hope that Goldman will be the only one.

Foles made it through his first week of walkthroughs with the Bears. It marked the first time he actually got to throw with actual teammates and coaches present. He’ll have a lot of ground to make up before he finds that same rhythm and timing Mitch Trubisky enjoys. If there’s one thing people should know by now, it’s don’t count him out.