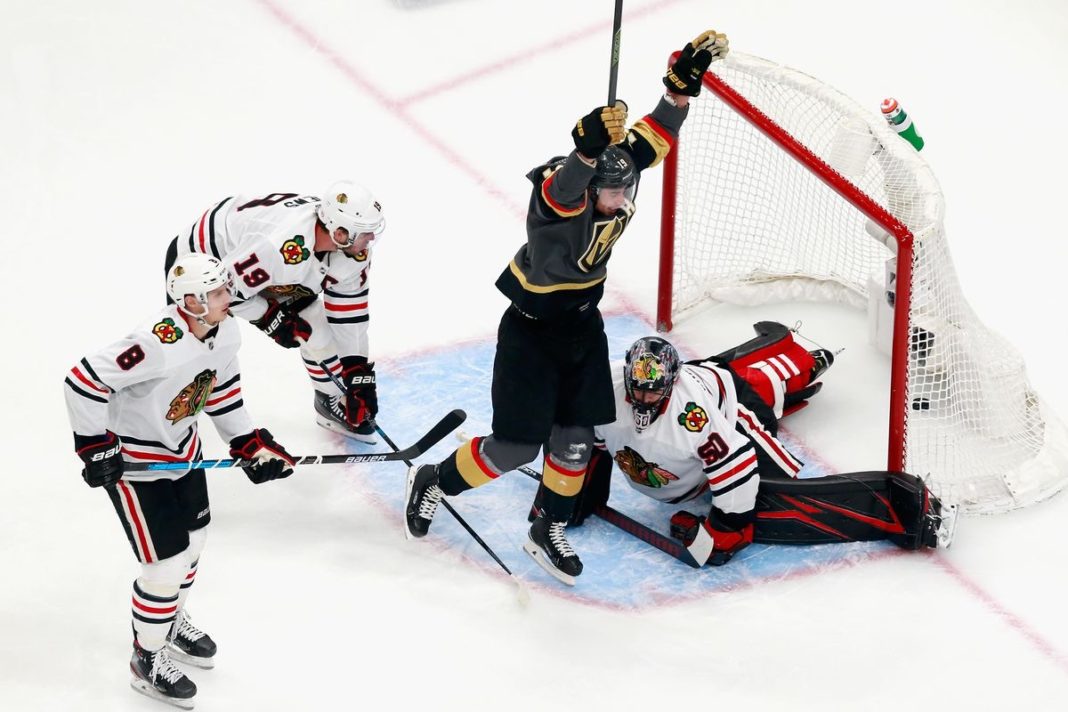 Corey Crawford stood tall in goal once again to give his team a chance, but the Blackhawks simply could not keep up with the far-superior Golden Knights.

The Chicago Blackhawks put up a fight but lost Game 5 of their first-round series 4-3 to the Vegas Golden Knights and are now officially eliminated from the 2020 Stanley Cup Playoffs. It was quite the run for the Blackhawks — the 12th and final Western Conference playoff team — as they upset the No. 5-seeded Edmonton Oilers in four games in the best-of-five qualifying round and dropped three one-goal contests to the No. 1 Golden Knights.

“It’s tough to be done; you dream of playing in the playoffs and love to be in these situations, playing in big games,” Blackhawks head coach Jeremy Colliton said. “Our team played very hard. Ultimately, we came up against an excellent team with a ton of depth. They just kept pushing us, but you can’t fault our work ethic and commitment.”

Much like in Game 4, the Blackhawks were able to weather the storm early and jumped out to a 2-0 lead in the first period. Jonathan Toews opened the scoring with his first goal of the series at 10:32 on a rebound off Dominik Kubalik’s backhander from the slot. With the goal, Toews tied Blackhawks legend Steve Larmer for fifth all-time in franchise history with 45 postseason goals.

Robin Lehner was in net for Vegas once again for Game 5, as expected, following his first loss since being acquired at the trade deadline on Feb. 24. The former Blackhawk stopped 23 of the 26 shots that he faced in the game to move his record to 8-1-0 with the Golden Knights.

After registering 12 shots on goal over the weekend and being rewarded with an empty-net goal in the Blackhawks’ Game 4 victory, Alex DeBrincat FINALLY put one past a goaltender for the first time this postseason to make it 2-0 at 18:19 off a beautiful passing play in transition. Connor Murphy pulled off a spin-o-rama at the Vegas’ blue line and then moved the puck down to Dylan Strome at the left circle, and he patiently waited for the defenders to clear the passing lane before setting up DeBrincat for a tap-in goal.

A recurring theme for the Blackhawks in this series was their inability to hold off the Golden Knights following a big goal of their own, and Vegas went on to tie the score in less than a two-minute span from the final minute of the first period to the opening minute of the second.

Max Pacioretty scored his first goal of the postseason just 1:10 after DeBrincat’s tally to cut the Hawks lead in half. Brayden McNabb’s shot from the point deflected off Toews’ stick and right to Pacioretty at the right circle with an open cage.

Mark Stone knotted the score 2-2 just 57 seconds into the second period after William Karlsson picked up a loose puck and made a tremendous pass to find the former Ottawa Senator in the slot. The play all stemmed from a poor change in transition by the Blackhawks.

Patrick Kane gave the Blackhawks their lead back with his first goal of the series at 4:02 by beating Lehner five-hole with a nifty backhanded shot. Coming into Game 5, the Hawks were 89-8-5 all-time and 6-0 in the playoffs when Toews and Kane both score a goal in the same game.

Kane’s goal would sadly be the last of the Blackhawks’ memorable 2020 postseason run, as Alec Martinez wound up tying the score once again with a power-play goal off a one-timer from the right circle at 7:28. Prior to the goal, the Hawks penalty kill had killed off 14 consecutive penalties, including all nine in the first four games of this series.

The hope was that the Blackhawks would come out of the second intermission with some desperation, but they just could not skate with a remarkably deep Vegas team. Even in the face of elimination, the Hawks still got outshot 11-7 in the final 20 minutes and could never sustain any pressure in the offensive zone.

The Golden Knights took a 4-3 lead at 1:34 of the third period and never looked back. Alex Tuch wound up with the game-winning goal by using his size and speed to bully Adam Boqvist off the puck and stuff one past Crawford in tight. Boqvist did not see the ice for over 10 minutes following that mishap.

The Blackhawks had a couple of looks in the final 20 seconds but could not beat Lehner for a fourth time before the final horn sounded. It was a fun ride in these playoffs, and do not forget, had the 2019-20 season finished like any other year, then the Hawks very likely would not have made the postseason.

“If things had gone the way they were supposed to, we wouldn’t have had a chance to play in the playoffs,” Toews said. “It was a great chance for us to play some meaningful hockey, and a lot of guys stepped up and showed what they can do.”

For more Blackhawks news and updates, follow the author (@TalkinHawkey) on Twitter. Be sure to check out the author’s daily podcast, Locked On Blackhawks, which can be found on Apple Podcasts, Spotify, and Twitter (@LO_Blackhawks). Photo credit: USA Today.