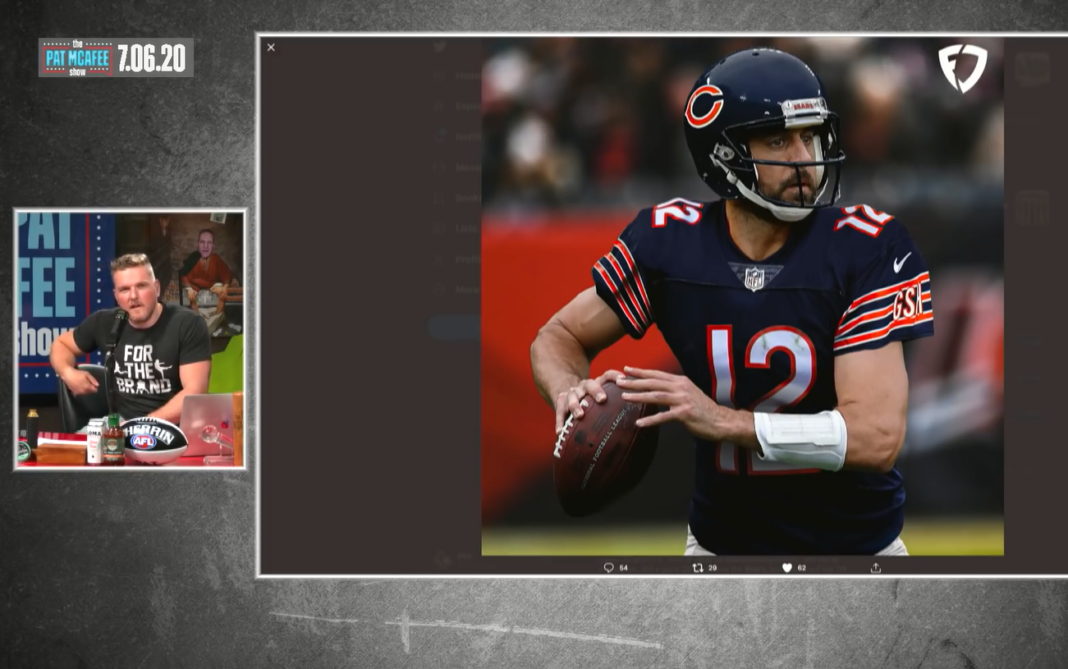 The fate of Aaron Rodgers seemed set in stone for so long. He was going to retire after a long career with the Green Bay Packers and march on into the Hall of Fame. That was his dream anyway. To forge a legacy having played for just one team. Except he forgot the team he played for. If Brett Favre couldn’t retire a Packer, what made him think he was any different?

That dream was all but shattered back in April. Green Bay signaled their intentions for the future when they traded up to secure quarterback Jordan Love in the 1st round. Expert knew then that Rodgers was on borrowed time. In the space of two years, three at the most, he would likely be moved out of town to make way for the young kid. This inevitably led to all sorts of speculation. If and when Rodgers is gone, where could he end up?

FanDuel recently released a photo of what he might look like in a Chicago Bears jersey. Former Pro Bowl punter Pat McAfee fell in love at first sight. He made his desires well known on his podcast recently.

“So no the expectation is Aaron Rodgers will finish his career elsewhere. That Chicago Bears picture this weekend? He looked great. He looked unbelievable in that thing…And Ty Schmidt, who’s a diehard Packers fan, he said, ‘Listen, Rodg’ would never. Rodg’ would never, ever, ever be a Chicago Bear.’ No matter how good he looks in that uniform. Which was very good. Unbelievable.”

Aaron Rodgers is just as competitive as Favre was

That sounds like the same type of fan who said Favre would never play for the Minnesota Vikings. Everybody saw how that turned out. Rodgers is every bit the competitor he was. Don’t think for a second he wouldn’t be out for revenge if the Packers decide to push him out of town when he still feels he’s the better quarterback. The Bears are just as good an option as the Vikings were back then.

He clearly loves playing at Soldier Field. Brian Urlacher was his favorite player to play against. If the opportunity is there for him to wear navy blue, it’s hard to imagine him passing it up. Much of it depends on where the Bears are in two or three years. If Matt Nagy is still the head coach, that would probably sweeten the pot. As would hopefully having some legitimate offensive weapons.

Some fans will never accept the idea of the all-time great villain being a Bear. Yet the reality is that would probably change after his first big-time throw only Rodgers can make.