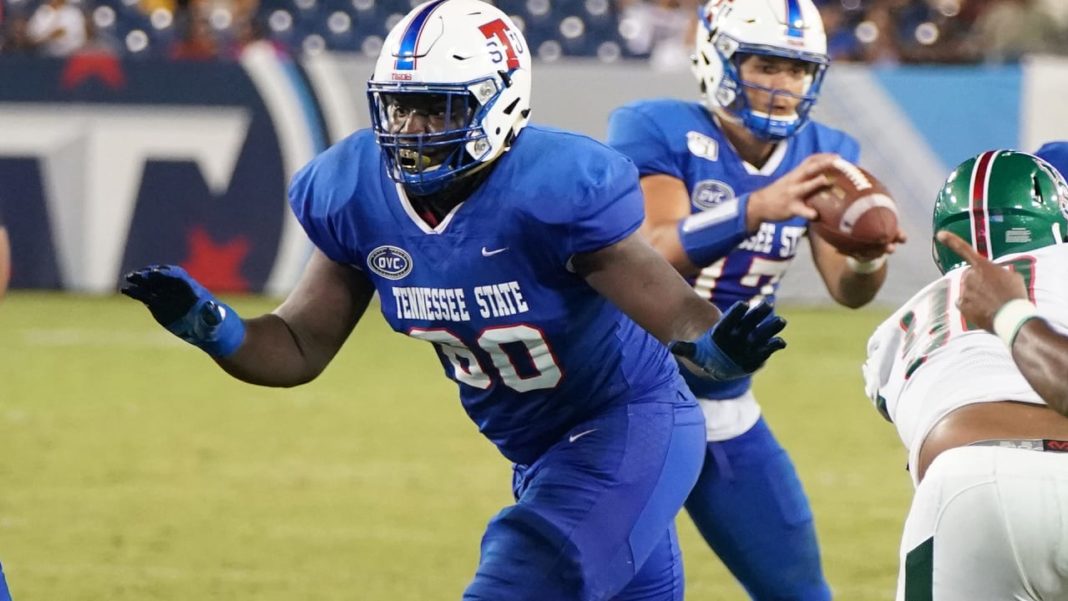 The Chicago Bears seem excited about their two 7th round picks on the offensive line in Arlington Hambright and Lachavious Simmons. That might seem odd to some but considering another 7th round pick, Charles Leno Jr., turned out alright? It’s easier to understand the optimism. Jeff Joniak got a chance to interview Simmons for Bears All Access, talking about his rise to the NFL and what he’s bringing to the table.

Simmons was the only player in the 2020 draft taken from a Historically Black College, hailing from Tennessee State. The same school that produced Richard Dent. During his time there, he earned respect for playing all five offensive line positions at various points in his college career. Though a tackle primarily, most expect him to shift inside to guard where his size and strength can be maximized while hiding his somewhat limited mobility.

One thing is for sure though, Simmons made it clear what he’s bringing to the table.

“Just the ability to finish people. I just love finishing blocks. When I used to play football in high school, I really didn’t want to play offensive line. I played defensive line because I felt offense was kind of soft. My coach told, ‘Man, you can do the same stuff you do on defense on offense.’ So I just got physical with it and I feel like that’s one of my main characteristics on the field. Just being physical and finishing people.”

One thing that people felt was missing from the Bears offensive line last year was power.

Simmons feels he has that in abundance. A product of his days living on a farm as a kid. While a standout feature of his body are his 35-inch arms, he was quick to offer a warning to defenders. Stay away from his hands.

“Yeah I feel like my arms give me a big-time edge because…one thing about my hands though? Once I get my hands on you, there’s no getting them off. They’re like some vice grips. That comes from the farm days and stuff like changing the oil with your bare hands and not using no tools that’s where all the gripping stuff came from.”

One thing is certain. The odds of Simmons actually playing in 2020 are remote. Four of the five Bears starting jobs on the offensive line were pretty much set in stone before the offseason began. Only right guard remains unresolved and most feel veteran Germain Ifedi was added to plug that hole. Either him or Rashaad Coward. The Bears rookie needs to know that nothing is promised to a 7th round pick. He needs to make an impression the moment he sees the field.

Right now his goal will be competing with Alex Bars, Hambright and others for a possible backup spot. Otherwise his likely destination will be the practice squad. It’s going to be a fun battle to watch in training camp. Hopefully Simmons will get to put those vice grips to good work in the preseason this August.