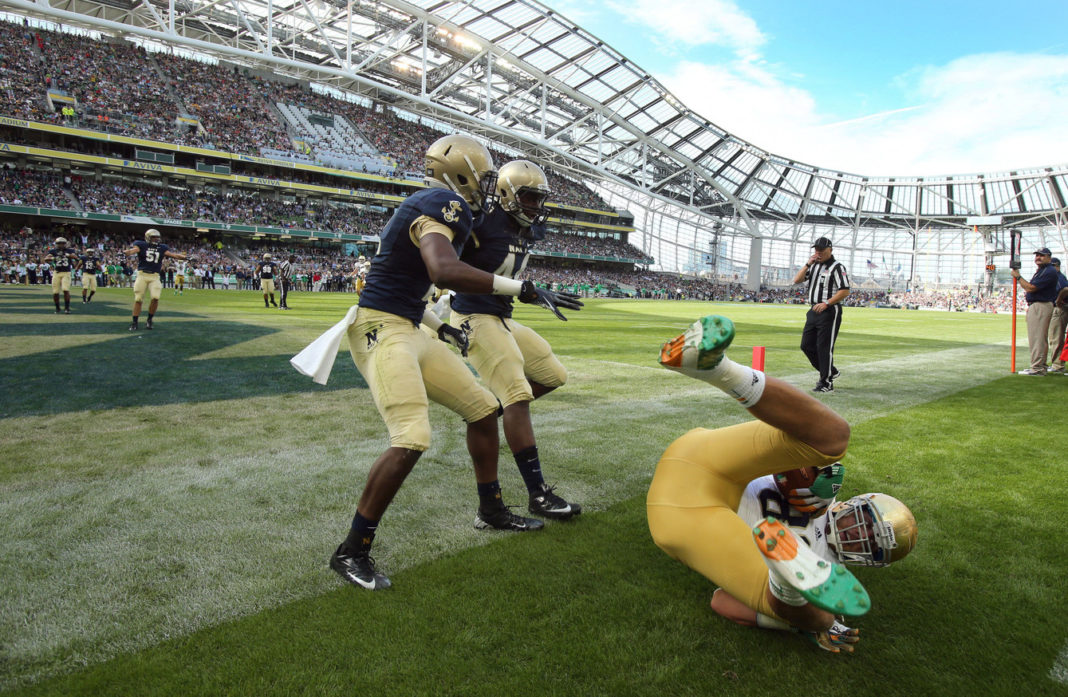 As of today, there is no official word on whether the Fighting Irish or Naval Academy will be postponing their match up at Aviva Stadium in Dublin, Ireland set for a August 29, 2020 kickoff. For now, the Notre Dame season opener is to go on as planned.

But the reality of the situation is starting to sink in as the worldwide pandemic has cancelled damn near everything we had to look forward to, including Notre Dame’s spring practices and the annual Blue & Gold spring game.

For The Safety Of Others

If you told me that with 163 days left until kick-off, that Notre Dame’s season opener was in jeopardy, I would call you crazy. But crazy is the world we are living in now.

Right now, the University of Notre Dame has reported a positive case of the Coronavirus in a press-release earlier this morning. The student was traveling abroad when they contracted the virus. The student has not returned to campus and is in quarantine.

It has not been reported that any members of the team or staff have tested positive. Although, the athletes have returned home since the University is closed for the remainder of the semester,

I would be remiss if I did not highlight the beating that the Irish put down on the Naval Academy last season. Everything went right for the then 16th ranked Irish. Contrary to popular belief, Navy was no slouch. They came into South Bend ranked 23rd.

While the final score showed a 52-20 victory for the Irish, the biggest lead they had was actually 42 points. Ian Book had five touchdown passes, four of which found Chase Claypool on is way to a career high four touchdown receptions in a single game.

This upcoming match up is actually shaping up to be a revenge game for Navy.

What Should They Do?

Before COVID-19 took the world by storm, I was seriously considering a once-in-a-lifetime trip to see the Irish take on the Midshipmen in Dublin.

But as the domino’s continue to fall you have to imagine that the Irish playing in Dublin is going to be met with controversy, that is if college football is able to start on time.

What do you think they should do?

All we can do is take it day by day. The Irish would typically begin team practices for the regular season in July time-frame.

If that timeline gets pushed back it foreshadows further delays to the college football season. This would most certainly impact the Notre Dame season opener since it is set on opening day for the NCAA.