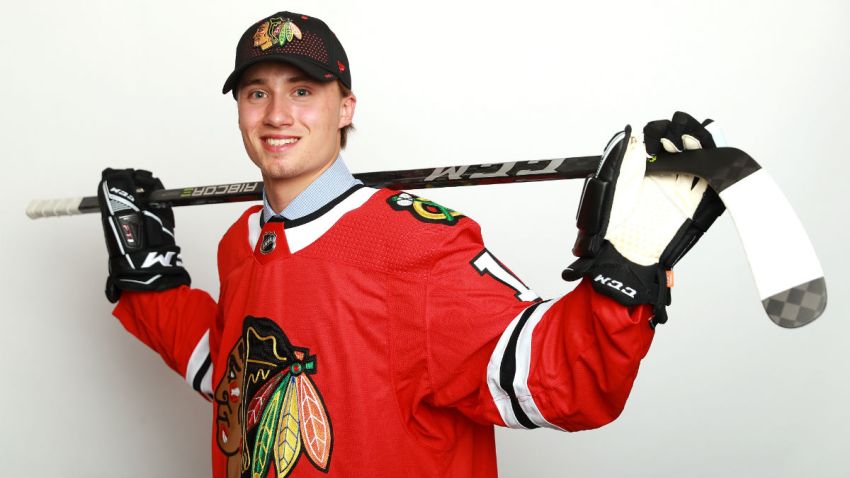 Both Nicolas Beaudin and Brandon Hagel are expected to be in the Blackhawks lineup on Wednesday night.

The Chicago Blackhawks made a surprising move on Tuesday when they recalled 2018 first-round (27th overall) pick, Nicolas Beaudin, from the Rockford IceHogs of the American Hockey League. The 20-year-old defenseman has three goals and 12 assists in 59 games for the IceHogs in his first professional season, but he’s still considered a bit underdeveloped defensively at this point in his career. The Blackhawks likely just want to see what they have in Beaudin, as the playoffs appear to be out of reach with 13 games remaining.

“The last month, I’ve been playing some good hockey down there [in Rockford],” Beaudin said. “But you never know what’s going to happen. You just play your game and take it day by day, and when I got the call, I was excited for sure.”

Beaudin, a 5-foot-11, 174-pound offensive defenseman spent the previous four seasons with the Drummondville Voltigeurs of the QMJHL before making the jump to professional hockey. In his final season of juniors, Beaudin tallied 56 points (7G, 49A) and a ludicrous +60 plus/minus rating in 53 contests.

“[Beaudin’s] got an offensive side of him,” coach Jeremy Colliton said. “It’s something we’ve been talking a lot about in our group and our team, we got to break the puck out better, cleaner… He does some of those things.”

Forward Brandon Hagel was recalled on Monday for the third time this year, but the 2016 sixth-round pick of the Buffalo Sabres has still yet to play an NHL game. With Drake Caggiula out on Wednesday vs. San Jose with a hand injury, Hagel will finally get to make his NHL debut.

“[Hagel] brings something similar to [Matthew] Highmore in just his work ethic,” Colliton said. “He’s a great skater, he wins races, he plays with a little edge. He’s got a little bit of rat in him, and we like that.”

Hagel, a 6-foot-1, 175-pound winger, can bring some skill to the table as well. The Morinville, Alberta native tallied 102 points (41G, 61A) in 66 games during his final year of junior hockey with the Red Deer Rebels, and his 19 goals are the most of any IceHogs player this season.

The Blackhawks are currently eight points back of the Vancouver Canucks for the second wild-card playoff spot, but they also have four teams ahead of them in the standings. The postseason appears to be out of reach at this point, so it’s wise for the front office to give the young talent some looks.

Here’s to hoping that Beaudin and Hagel both perform well down the stretch for the Blackhawks.