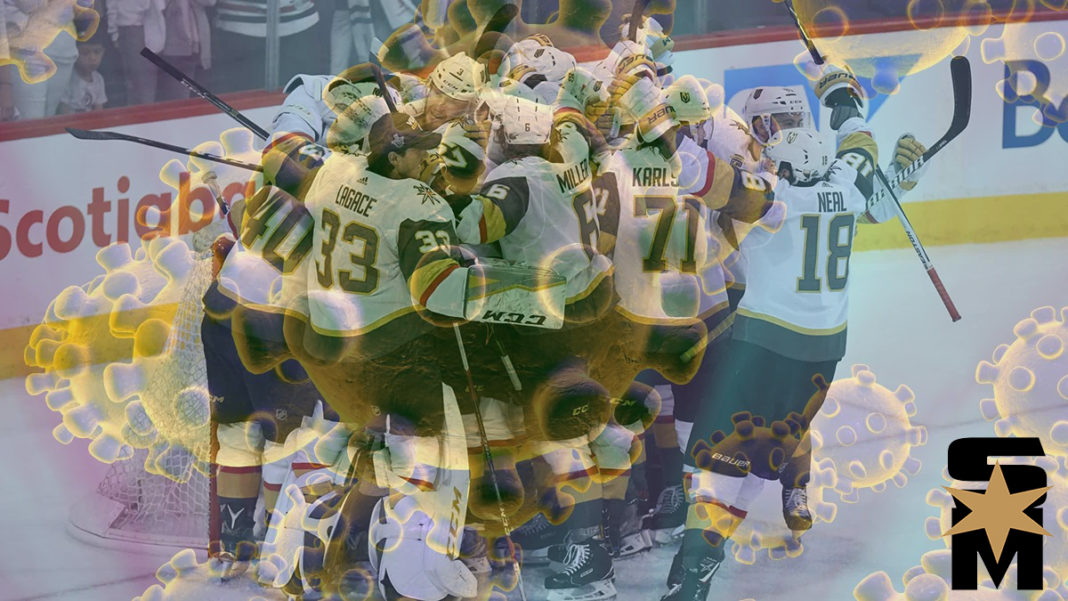 Looks like the only thing that can stop the red hot Vegas Golden Knights this spring is something smaller than a goalie and much stronger than an enforcer. The NHL announced it will pause the 2019-20 regular season due to the concerns of the coronavirus, the League announced Thursday.

The NHL has 189 games remaining, including 10 scheduled for Thursday. The regular season was scheduled to end April 4, with the Stanley Cup Playoffs starting the week of April 6. Now, the remainder of the season is in doubt for the first place Golden Knights and the rest of the league.

“In light of ongoing developments resulting from the coronavirus, and after consulting with medical experts and convening a conference call of the Board of Governors, the National Hockey League is announcing today that it will pause the 2019 20 season beginning with tonight’s games,” the NHL said in a statement.

“The NHL has been attempting to follow the mandates of health experts and local authorities, while preparing for any possible developments without taking premature or unnecessary measures,” the NHL continued. “However, following last night’s news that an NBA player has tested positive for coronavirus — and given that our leagues share so many facilities and locker rooms and it now seems likely that some member of the NHL community would test positive at some point — it is no longer appropriate to try to continue to play games at this time.

“We will continue to monitor all the appropriate medical advice, and we will encourage our players and other members of the NHL community to take all reasonable precautions — including by self-quarantine, where appropriate. Our goal is to resume play as soon as it is appropriate and prudent, so that we will be able to complete the season and award the Stanley Cup. Until then, we thank NHL fans for your patience and hope you stay healthy.”

The announcement comes one day after the NBA announced it was suspending its season after a player on the Utah Jazz tested positive for the virus and the same day Major League Baseball announced Thursday it was also suspending operations indefinitely. The NCAA announced on Wednesday it would play all of its championships, including the Frozen Four and the men’s and women’s division I tournaments without fans.

The @NHL have followed the lead of other professional leagues by hitting pause on the 2019-20 regular season.

There is hope that the @GoldenKnights and the rest of the league can return at some point.

While fans are disappointed, many understand the extra caution.

“They’ve got to do what they’ve got to do,” frequent game attendee Derek Stafford said. “Postponed is much better than cancelled. Let’s hope they find a way to work through this window and eventually get back on the ice.”

The Golden Knights hit the temporary halt in first place in the Pacific Division, having won eight of 10 in the team’s best stretch of the season. The pause will certainly have an effect on the players’ health, but possibly in a positive manner — virus aside. Banged up players will get a chance to recover from their nagging injuries and players like Marc-Andre Fleury can reset after what many considered to be a rough stretch.

Stay tuned to Sin City Sports Mockery as this story continues to unfold.