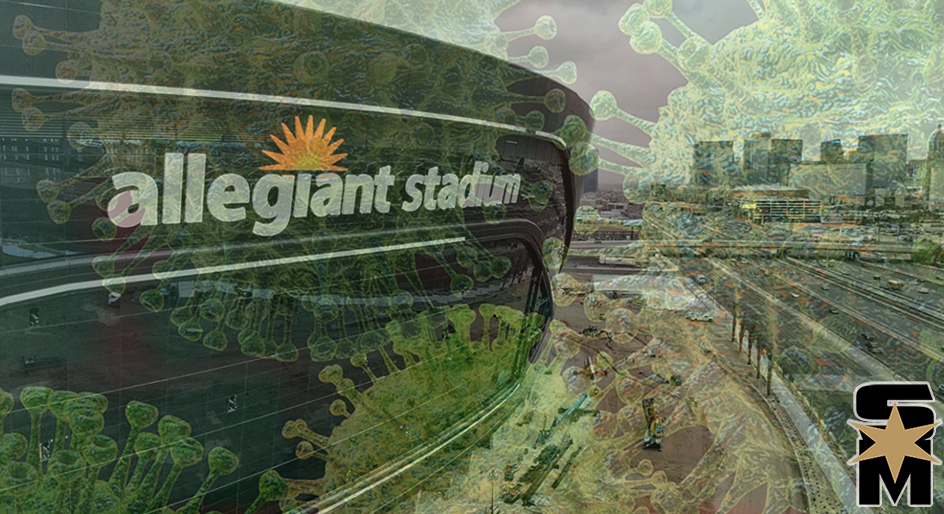 Essential vs. Non-Essential. This is the question many Raiders fans have asked during the COVID-19 pandemic when it comes to the construction of the new football stadium in Las Vegas. While many Las Vegas jobs have been forced into the homestead, construction has not which is why Allegiant Stadium’s construction continues unabated.

While the crews are taking great care to work within the social distancing protocol, many fans have wondered if this is putting them in danger. Regarding the construction of Allegiant Stadium during the pandemic, Tommy White of 872 Laborers told FOX5 that construction “is essential.”

When asked, one of the contracted construction companies also confirmed the continued project.

On Tuesday, Nevada governor Steve Sisolak, who was a vital cog in the Raiders’ move to Las Vegas, spoke to Nevada residents. The first-term leader mandated no social gatherings of 10 or more during the pandemic, imploring Nevada residents to heed his request as the city — and the world — fight the spread of COVID-19.

“In order for those who need critical care make sure they get it, it is our responsibility to take our role seriously and stay home for Nevada. You’re being told not to go out. You owe it to them to listen to that directive,” he said in an isolated press conference.

Las Vegas Stadium Authority Chairman Steve Hill, who also serves as CEO of the Las Vegas Convention and Visitors Authority, has been quoted by the Las Vegas Review-Journal tha there is no concern of the coronavirus outbreak affecting the stadium’s scheduled completion date of July 31.

“Although we don’t have any experience with the coronavirus, I cannot envision a situation where the coronavirus would impact the construction of the stadium,” Hill told the Las Vegas Review-Journal.

The project is currently more than 85% complete with $1.4 billion of the $1.97 billion project budget expended, according to the Stadium Authority’s January monthly stadium report. If the actual NFL season is delayed, the stadium itself will have even more time to finish.

According to Mike Freeman of Bleacher Report, there’s a growing concern amongst many NFL coaches and general managers that the 2020-21 regular season may not be able to start on time due to the COVID-19 virus.

One thing to pass along: I’m increasingly hearing from coaches and front office executives that they believe it will be nearly impossible for the season to start on time. Some believe training camp will start in the fall.

One dynamic in play is that some coaches are having blunt conversations with team doctors. The doctors are telling them the truth. That the pandemic could last months. There’s been no sugarcoating or lying.

On more of the ground level of the NFL, with coaches and team execs, there’s more of a blunt realization of where we are. This is exemplified by @AdamSchefter reporting on how GMs want draft postponement. But league office is pushing for as much normalcy as possible.

While everything is still up in the air, the NFL will continue to look at the calendar as the days shift into months. With the NBA, NHL and now MLB on hold, the out-of-season NFL has some wiggle room. Major League Baseball has already begun looking at playing a shortened schedule while using bi-weekly doubleheaders as a means with which to play close to its normal 162 games.

Even a neutral site World Series has been talked about.

Went on @GetUpESPN this morning to talk about when MLB would ideally like to start the season and the possibility of a neutral-site World Series. Watch this and read about that and much, much more from my news story late last night: https://t.co/vjZAqKgJ7J pic.twitter.com/FNorgJ2cA5

The latest on the state of MLB, packed with news, including:

While the virus continues to rise exponentially in New York, as of the publishing of this story, Nevada only had 321 total cases with roughly two-thirds of that number in southern Nevada. With limited testing, that number is bound to rise but construction hasn’t slowed in spite of fears.

When all of this is said and done and, much like the New Orleans Saints’ return to the Superdome after Hurricane Katrina, the NFL season could take on more importance than ever as fans and society look to rebuild from the largest worldwide shutdown in modern history.