Quenton Nelson is your modern day Chuck Norris. There really is not much he can’t do.

Nelson was drafted sixth overall in the 2018 draft and has already been regarded as a top guard in the NFL coming out of the offensive line factory that is Notre Dame.

Off the field, Nelson is just a likable dude.

So it was no surprise when I discovered that he had literally paid a guy $5 for putting up 340 on the bench after proving he could do it.

Here was the video:

Show Me The Money!

Like most, I was skeptical, so I was able to get the guy in the video to send me the screenshot from Big Q. 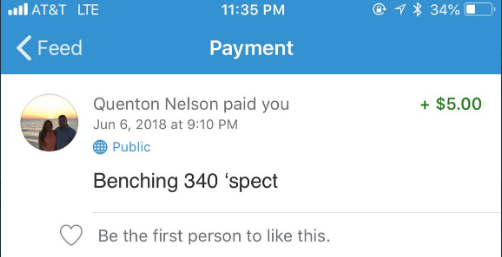 Pretty cool gesture from a guy who at the time had yet to take an NFL snap.

If You Can Dodge a Wrench..

This really came about from the Pro-Bowl last season when an unknown assailant hit Nelson in the head during the game of dodge ball.

He was quick to jump on and offer up $100 to the first person to identify the guilty party!

$100 Venmo to the first one to tell me who pegged me in the dome #Payback https://t.co/dIl8dgTDnG

I have no doubt that Big Q followed through on it. It appears to have been Packer’s Wide Receiver, Devante Adams – but others speculate it was Bears Safety Eddie Jackson, or perhaps another errant throw by Mitch Trubisky – who was just trying to play catch on the sidelines…

After receiving a fine last year for what was deemed an illegal hit, you can be the judge for yourself:

Colts got so much attention for Quenton Nelson’s screaming block vs. Jacksonville – see Twitter – that the NFL fined Indianapolis’ first-round pick $26,739 for leading with his helmet, per source. Nelson is appealing the fine from the play on which no penalty was called. pic.twitter.com/s82oQuIkoO

The NFL fined Nelson. What did he do? He requested a Venmo from the Indianapolis Colts front office.

Quenton Nelson Venmo requested $26,000 from the Colts Head of Media after he got fined 💰😂💰 @BigQ56 pic.twitter.com/aH2KuUuHwG

They did not accept.

Sporting SuperStars Around The World