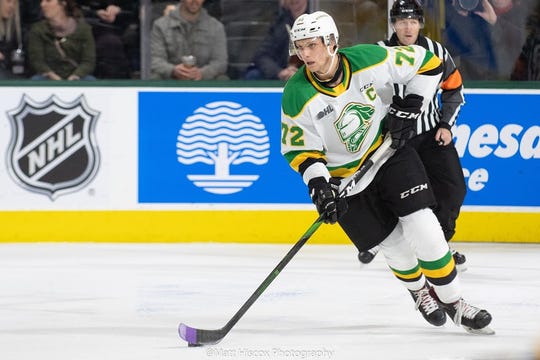 The Blackhawks acquired Regula back on Oct. 28 from the Detroit Red Wings in exchange for Brendan Perlini.

Chicago Blackhawks prospect Alec Regula was named the Ontario Hockey League’s defenseman of the month for February after tallying 18 points (11G, 7A) in 11 games for the London Knights. Regula recorded a point in 10 of the 11 contests and had multiple points in six of them.

Regula, a 2018 third-round pick (67th overall) of the Red Wings, is currently serving as co-captain of the Knights along with Columbus Blue Jackets prospect Liam Foudy. The 6-foot-4, 205-pound blueliner currently leads all OHL defenseman in goals (26) and ranks sixth in points with 57.

Make sure to keep an eye on Regula going forward, as he could be ready to make the jump to professional hockey at the end of this season.