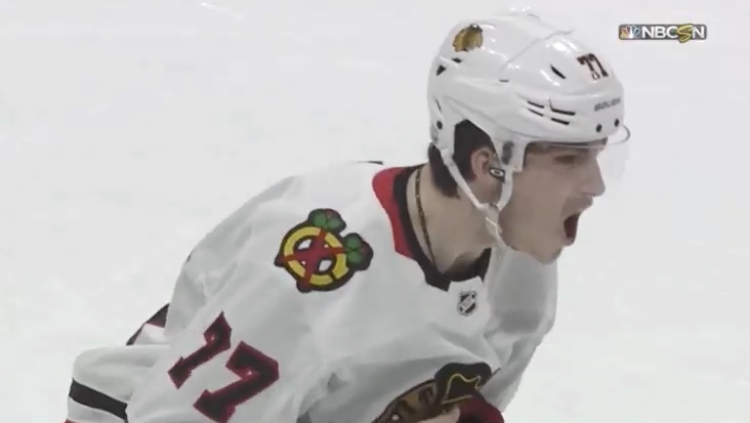 Adam Boqvist and Olli Maatta scored 10:27 apart to erase Minnesota’s two-goal lead, but the Hawks weren’t able to pick up the extra point in overtime.

The Chicago Blackhawks fell 3-2 to the Minnesota Wild at Xcel Energy Center on Tuesday night. Kevin Fiala scored twice in the second period to give the Wild a 2-0 lead, but Boqvist and Maatta each found the back of the net in the third to secure a crucial point in the standings. With the overtime loss, the Blackhawks move to 25-21-7 through 53 games and remain three points behind the Calgary Flames for the second wild-card playoff spot.

“I feel good that we got the point,” defenseman Duncan Keith said after the game. “Sometimes, it’s not going to be pretty. We did a good job finding a way to get one.”

After grabbing a lead in the first period in four of their previous five contests (all four resulted in victories), the Blackhawks looked lost out of the gate against Minnesota. It took more than half the period to put a shot on Wild netminder Alex Stalock, and they finished with just four total in the opening 20 minutes.

Minnesota was unable to take advantage of the Blackhawks lackluster performance, as goaltender Corey Crawford stopped all 12 shots he faced to keep the game scoreless. Crawford earned the start for the second consecutive game after a strong performance Saturday vs. Arizona, and he picked up right where he left off on Tuesday.

“All year, [Corey’s] been great — not just the last month and a half,” said Keith. “Early on there, we weren’t playing well as a team — as good as we have been lately — so he got hung out to dry there a few times. But if you look at games, he was making big save after big save.”

Moments after a failed powerplay opportunity early for the Blackhawks, Fiala capitalized on a miscue along the boards and fired a shot past Crawford to make it 1-0 Wild at 3:53. Jonathan Toews was unable to prevent Fiala from skating to the high slot, where he used a Luke Kunin screen to beat Crawford with a wicked wrister.

Fiala scored his second goal of the period on the powerplay at 15:08 with another wrist shot to double the lead. Just before Fiala’s second tally, Ryan Carpenter was denied on a shorthanded breakaway by Stalock to keep the Hawks off the board. That save turned out to be one hell of a momentum swing, as less than a minute later, Minnesota jumped ahead 2-0.

Crawford played phenomenal all game long to keep the Hawks alive, but this was one he needs to have due to the circumstances. Maatta is also just as guilty as he got torched by Fiala in transition.

The second period was a bit better for the Blackhawks, but that wasn’t saying much following a horrendous opening frame. If there was any hope for a comeback, things needed to change right out of the intermission for coach Jeremy Colliton’s squad.

“I think it’s been a while since we played that poorly,” said Colliton on the first and second periods. “[Minnesota] had an urgency and desperation to their game that we didn’t match in the beginning. I thought [Crawford] stood on his head, gave us a chance.”

Boqvist cut the Blackhawks deficit in half at 6:23 with a sneaky wrist shot from the right point for his third goal of the season. David Kampf didn’t get credited with an assist, but he provided a beautiful screen in front to blind Stalock.

The Hawks kept their foot on the gas pedal down the stretch, and Maatta eventually tied the game at 16:50 from a horrible angle with his fourth goal of the year. 19-year-old Kirby Dach picked up the secondary assist on Maatta’s goal to extend his point streak to four games (1G, 4A during the streak).

Thanks to an impressive come-from-behind effort from the Hawks, they forced the game into overtime and ensured at least one point for the night.

“If we’re great tomorrow, then it’s a great point,” said Colliton. “But if we follow it up with another flat performance, then it’s just us not playing well enough in an important time of the year.”

Much like Saturday against Arizona, overtime was mass chaos on Tuesday in St. Paul. Toews was able to beat Stalock on a 2-on-1 rush early in the 3-on-3 period, but his shot rang off the crossbar and stayed out of the net.

After a couple of A+ chances for both sides, Erik Gustafsson committed a dreadful turnover in the defensive zone, which led to Matt Dumba’s game-winning goal at 2:21 of overtime.

After an impressive comeback in the third period, Gustafsson’s turnover was a brutal way to lose the contest. Still, the Blackhawks didn’t play anywhere near their best hockey in the first 40 minutes, so it’s hard to say they deserved a better fate on Tuesday.

The Blackhawks are right back in action on Wednesday night at the United Center to take on the 32-10-12 Boston Bruins. These teams met back on Dec. 5 at TD Garden in Boston, which resulted in a 4-3 OT victory for the Hawks after blowing a 3-0 lead in the third period.

The contest is slated for 7:00 p.m. CT and is scheduled to be on NBCSN, NBCSNCH, and TVAS.