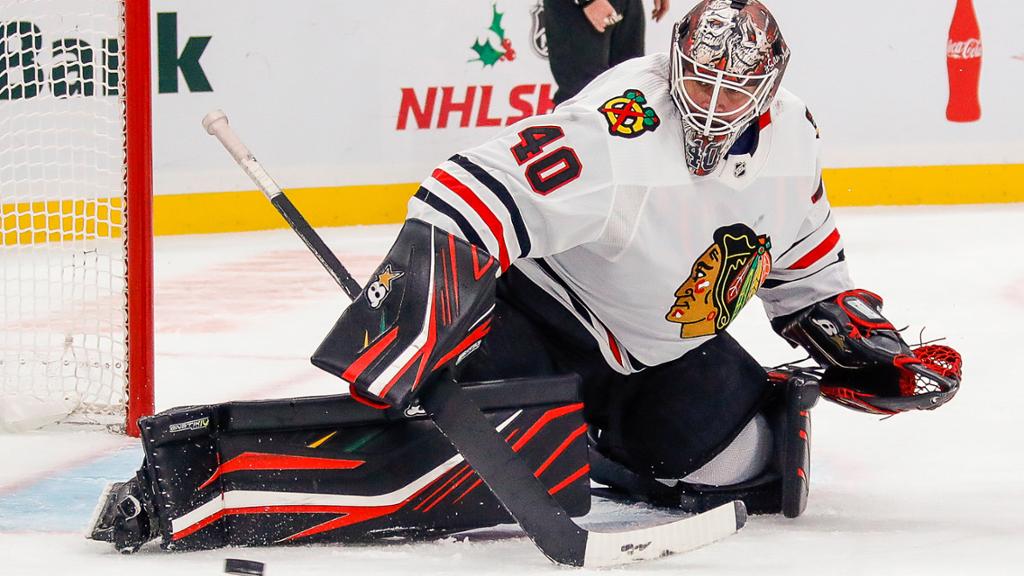 Despite being one of the hottest teams in the NFL, the Vegas Golden Knights aren’t resting on their laurels. The first-place VGK pulled off a big move Monday morning, sending backup goalie Malcon Subban as well as prospect Slava Demin and a second round pick to the Chicago Blackhawks in return for goalie Robin Lehner.

The trade, which was agreed to and announced mere minutes from the noon trade deadline, brings in one of the league’s better goaltenders. The move took many by surprise, simply because it was assumed the Knights were looking for help on the defensive end but not necessarily in the net.

According to KnightsOnIce.com, Lehner started 46 games for the Islanders last season, going 25-13-5 as New York reached the second round of the Stanley Cup Playoffs. Lehner signed a one-year, $5 million deal with the Blackhawks on July 1. He’s 16-10-5 this season with a .918 save percentage for the 27-27-8 Blackhawks, and boasts a 3.10 goals-against average in 2019-20.

Not only is Lehner a massive upgrade over Subban and the Golden Knights’ other backup options, he also serves as a great safety net in case Fleury slumps or is injured. He has been one of the league’s better goalies the past two years and is an unrestricted free agent after this season.

Really exited to join Vegas. Going to be a ride. Can’t wait to get there but please no drums at the airport I’m shy…

Once news of the trade hit the wire, there were plenty of opinions on the move, mostly positive for the Golden Knights in adding another No. 1 goalie to pair with future Hall of Famer Marc-Andre Fleury.

Malcom Subban is involved in the trade with the Chicago Blackhawks. Great insurance I’m goal for the Vegas Golden Knights with two number 1 goalies charging into the playoffs.

The Golden Knights have traded for goaltender Robin Lehner, and Malcolm Subban is indeed going back to Chicago in the trade.

Vegas just created the best goalie tandem in the NHL. Will be fascinating to see how they utilize Fleury and Lehner. #VegasBorn

There is no way there aren’t underlying issues that go along with that lehner trade. Biggest chip at the deadline and Stan Bowman failed. The return on that is laughable. What a steal for Vegas. #Blackhawks #NHLTradeDeadline

You have to hand it to #VGK management. They have really gone above & beyond to make some really high quality moves at this deadline. Lehner & Cousins are great aquisitions for our roster. Would be amazing to see Roy, Tuch & Glass heal up. We're a scary team again! GO KNIGHTS GO

Chicago Blackhawk fans, on the other hand, were none too happy their “Original 6” franchise was selling at the deadline once again. More so, the perception Blackhawks GM Stan Bowman was getting fleeced via trade.

my heart is broken that VGK only had to give up a… SECOND ROUND PICK and some prospect we don’t even know the name of yet for ROBIN LEHNER.

CHI fleeced in yet another trade

On a strange note, the Golden Knights looked to be also parting ways with one of the team’s top prospect, allegedly sending Cody Glass to the New Jersey Devils for Sami Vatanen and a conditional fifth round pick per a tweet from what looked like the New Jersey Devils social media account.

TRADE ALERT🚨: The #NJDevils  have acquired Cody Glass from the
Vegas Golden Knights for Sami Vatanen and a conditional 5th round pick. pic.twitter.com/9B0YUDjsj0

As it turns out, that was a false report. And I fell for it like a jabroni.

The Golden Knights DID also acquire forward Nick Cousins from the Montreal Canadians in exchange for a 2021 fourth round pick.

The Vegas Golden Knights have acquired forward Nick Cousins from the Montreal Canadiens in exchange for a 2021 fourth-round pick.#VegasBorn #GoHabsGo pic.twitter.com/2r5NTdZHTw

The move signals the Golden Knights are all-in on the a Stanley Cup run, providing depth and making moves that’ll increase new head coach Peter DeBoer’s lineup flexibility. With recent trade acquisition Alec Martinez playing well in his first stint with the Golden Misfits, DeBoer has plenty of bodies to shuffle around.

In their six-game winning streak, the Golden Knights have moved into sole possession of first place in the Pacific Division with wins over some of the top teams in the NHL, including the New York Islanders, St. Louis, Tampa Bay, Washington and Florida.  The VGK are now just six points from the top spot in the Western Conference.

Vegas returns to action Wednesday night at home against the Edmonton Oilers at 7:30 p.m.