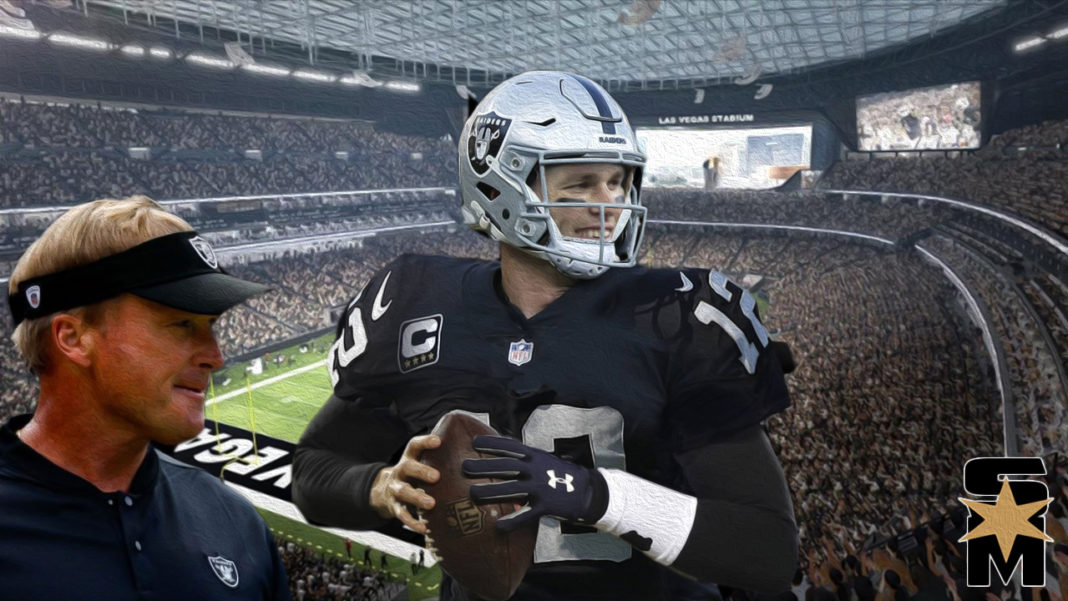 It’s Super Bowl Sunday and what would a Super Bowl be without Tom Brady, or in this case, a breaking report about Tom Brady. This time, the news hits close to home as multiple reports have linked the Las Vegas Raiders to the six-time Super Bowl champion and surefire first ballot Hall of Famer.

While the idea has been floated before, never before have the Raiders and Gruden been more linked to Brady, who allegedly purchased a lot of land in The Summit Club, a highly exclusive community in Summerlin outside of Vegas proper. Just weeks ago, it seemed more-than-likely to stick with franchise quarterback Derek Carr but, according to respected NFL reporter Adam Schefter, the Raiders are poised to pursue Brady, fanning flames to the idea that one of the greatest quarterbacks to ever live could be throwing on a silver and black No. 12 jersey in 2020.

Raiders are poised to pursue quarterback Tom Brady if he doesn't re-sign with the Patriots before free agency begins, league sources told ESPN.https://t.co/rAloZCF2W1

FYI on Tom Brady, @Raiders. Derek Carr is proceeding forward with confidence he will be the Raiders starting QB. Sense is, though, Raiders will explore all options at QB: Draft and FA.

This story may have speedy legs too. On this coming Wednesday, $2.9M of Raiders QB Derek Carr’s $18.9M base salary for 2020 becomes fully guaranteed. If a pursuit of Tom Brady materializes in March, the Raiders could quickly clear $16M in cash by moving on from Carr, using that money towards a potential Brady deal.

Brady has been non-committal about his plans but his social media posts all offseason have been scrutinized with a fine tooth comb.

New England Patriot quarterback Tom Brady’s Instagram post today. Is he retiring? Or will he be playing for another team next season? pic.twitter.com/dmn8GScCdi

“I’ll explore those opportunities wherever they are,” Brady told Peter King of NBC Sports. “If it’s the Patriots, great. If that doesn’t work, I don’t know. I just don’t know. I love playing football. I still want to play football. I think I still can play at a championship level. I’ve just got to do it. I’m motivated to get back to work and training.”

Other possible suitors for Brady include the Los Angeles Chargers, Chicago Bears, Tennessee Titans and — as some have heavily speculated —  the Indianapolis Colts.

If Brady were to join the Raiders, this would mean Carr would be moved via trade or by contract maneuvering.

Pro Football Talk broke it down:

“Carr, who has a new house in Las Vegas next door to coach Jon Gruden that Brady could buy, has a contract that pays out $18.9 million in 2020 salary. Of that amount, $2.9 million becomes fully guaranteed on the third day of the waiver period, later this week.

But that’s a small price to pay, especially since the offset language in the contract would generate a dollar-for-dollar credit — and if Carr is cut someone else would pay him far more than that. The bigger question is whether Carr would be traded. Given the current quarterback market, $18.9 million becomes a bargain.

The Raiders would take a $5 million cap charge by trading Carr before June 1. As the salary cap busts through the $200 million mark, it’s also a small paper price to pay in order to upgrade from Carr to Brady.”

In other words, this isn’t a difficult transaction, even if some fans may revolt with anger and molotov cocktails. Regardless, the move makes sense for the future. GM Mike Mayock and Gruden look to the draft to find their next franchise quarterback beyond Brady. Brady could play both mentor to the rookie draft pick as well as franchise QB in the team’s first season in Las Vegas.

Originally, the idea seemed far fetched but so did the prospect of signing Antonio Brown until Mayock shocked the world. While that one didn’t work out, Brady is a leader and an extension of the coaching staff while in the huddle. His leadership for Gruden would mean a great deal of football IQ would be calling the shots.

Social media was aflame prior to the Super Bowl talking about the possible marriage between Brady and the Raider Nation.

Pats fans filing a police report on Derek Carr if Tom Brady goes to the Raiders.

Derek, do you have a few thoughts now that reports are confirmed your Raiders will pursue Tom Brady this off-season? pic.twitter.com/mWhS8hHuBh

While the odds seem slim considering the New England Patriots are reportedly willing to offer Brady $30 million, Brady seems to want more — weapons. If the Patriots aren’t willing to spend on weapons, the legendary quarterback seems happy to cut ties and move one.

Rapoport said the Patriots are willing to give $30 million to Tom Brady. Interesting. Also said that Brady wants the Patriots to spend big bucks on weaponzzzz. pic.twitter.com/ml8W5k5KIU

While fans seem to love Carr, the 28-year-old quarterback has never even played in a postseason game, let alone a Super Bowl. To add to the intrigue, stranger things have happened and Gruden and Mayock (Gru-yock) have been known to make bold moves (see Khalil Mack and Amari Cooper trades).

I, personally, expect Carr under center when the Las Vegas Raiders make their first appearance at Allegiant Stadium this fall but these new reports have really started fanning the flames around Las Vegas’ newest major league sports franchise.

But Tom Brady and Las Vegas together? It seems like a perfect fit and I’m here for it.

you: it's hard to picture Tom Brady in Las Vegas