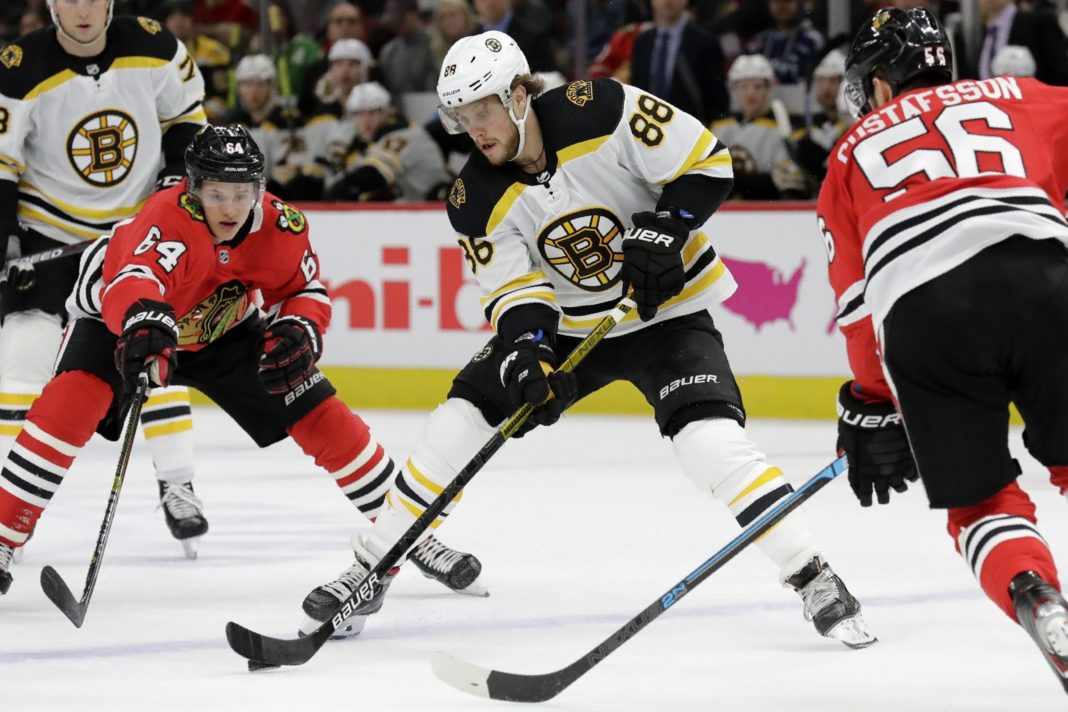 Drake Caggiula appeared to score the game-winning goal with 1:05 left in the third period, but the officials blew the play dead due to a hand pass, which they admitted was the wrong call.

The Chicago Blackhawks fell to the Boston Bruins 2-1 in overtime at the United Center on Wednesday night. The story of the contest was the call that referee Peter MacDougall made with just over a minute remaining in regulation. MacDougall ruled that Blackhawks defenseman Olli Maatta passed the puck with his hand to Caggiula before he rifled a shot past Bruins goaltender Jaroslav Halak. The only problem was that Maatta, who was lying on the ice after drawing a tripping penalty, clearly had the puck touch his stick before Caggiula received the pass.

Captain Jonathan Toews told reporters after the game that MacDougall, who has less than 100 games of NHL experience, admitted to making a mistake on the play. Unfortunately, that mistake cost the Blackhawks a regulation win against one of the NHL’s top teams. Boston went on to prevail in overtime as Jake DeBrusk made a sweet dish to set up Charlie McAvoy for the game-winner at 1:19. With a second consecutive overtime loss, the Blackhawks move to 25-21-8 and remain two points back of the Calgary Flames for the second wild-card playoff spot.

“It’s tough,” said coach Jeremy Colliton. “There will be another night where we come out on the other end of it. These things have a way of evening out. But it’s just disappointing because it would’ve been a big two points for our team.”

The Blackhawks struggled out of the gate for the second consecutive night, as Robin Lehner was relied on heavily to keep the game scoreless in the first period. Not only did the Bruins dominate the Hawks in shots on goal 16-5, but they had a significant lead in shot attempts (26-10 !!) and 5-on-5 scoring chances (9-5).

Lehner was terrific to keep the Bruins off the board, stopping all 16 shots he faced in the opening frame. The 2019 Vezina Trophy finalist robbed Bruins forward Brad Marchand a couple of times, and he made a diving glove save on David Krejci late in the period as well.

The second period opened with quite the scare for the Blackhawks, as defenseman Adam Boqvist crashed awkwardly into the boards after a hit by Krejci and did not return with a right shoulder injury. Boqvist missed one game back in December with the same injury after taking a nasty hit against the New Jersey Devils. Colliton said after the game that the 19-year-old defenseman’s injury isn’t too serious, but more news will come out in the following days.

Alex DeBrincat opened the scoring on the powerplay shortly after to snap a five-game goal drought for his 13th tally of the season. Patrick Kane found rookie Kirby Dach all alone in front of the net for a couple of stuff shots, and DeBrincat jumped on a rebound to make it 1-0 Blackhawks.

Dach extended his point streak to five games with the primary assist, which ties his longest streak of the season. The No. 3 pick in 2019 has six points (1G, 5A) during the streak and continues to get better with every game.

Sean Kuraly answered back to tie the score 1-1 less than six minutes later by beating Lehner five-hole after circling the net. Lehner performed fantastically to keep the Hawks alive all night long, but this is one he would like to have back after just securing a lead.

Both teams had their opportunities to jump ahead in the opening 10 minutes, but neither squad could find the back of the net. The second half of the period, on the other hand, was filled with chaos and controversy.

Zack Smith was penalized for an illegal check to the head of Bruins defenseman Torey Krug with 2:26 remaining, which he felt was a horrible call. Smith made sure to speak his mind to the officials on the way to the penalty box.

“If it’s a hit to the head, why is [Krug] not going to the quiet room?” Toews asked after the contest. “He’s out there on the powerplay right away.”

Just a few moments after Smith’s penalty, Ryan Carpenter was ejected from the game for yelling at the referee from the Blackhawks bench. Colliton had a hilarious reaction when asked about Carpenter’s misconduct.

“[Carpenter] got cross-checked in the face on the faceoff, and he wasn’t happy about it.” Fair.

Nothing came close to MacDougall’s blown call on what should have been Caggiula’s game-winning goal, though. The Blackhawks should have had a 2-1 lead with 1:05 remaining in regulation, but they somehow found themselves on the wrong end of the final score. It was a tragic ending to what should have been a two-point night at the United Center.

“They made a mistake, blew the whistle,” said Colliton. “Not much you can say after that. It’s done.”

The Blackhawks have three days off before they take on the Jets at Bell MTS Place in Winnipeg on Sunday. The Jets are currently 26-23-5 through 54 games and trail the Hawks by just one point in the standings, but they do play twice (Thursday @ St. Louis, Saturday vs. Ottawa) before Sunday’s matchup.

These two teams have played three times already this season, with the Blackhawks coming out on top in the last two meetings by a total score of 9-3. Winnipeg did win the first game 3-2 back on Oct. 12 at the United Center.