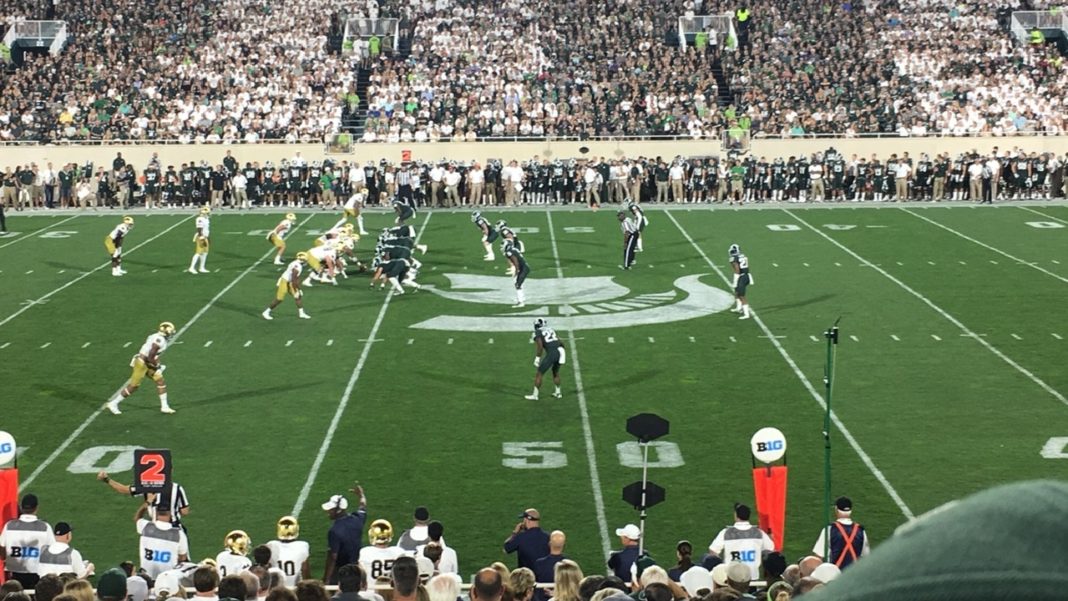 Notre Dame and Michigan State have been playing each other since MSU was known as a an agricultural school. Today though, the Spartans have ended a bizarre coaching scramble with the hiring of now former University of Colorado head coach, Mel Tucker to replace Mark Dantonio who abruptly retired a week ago.

Tucker openly stated on Saturday that despite the interest, he was “committed to the [Colorado Buffalos] for #TheBuild of our program.”

While I am flattered to be considered for the HC job @MSU_football, I am committed to @CUBuffsFootball for #TheBuild of our program, its great athletes, coaches & supporters. #UnfinishedBusiness #GoBuffs

We are #Relentless #Culture #TheBuild

Apparently, money-talks. Tucker, based on his 35th ranked recruiting class in his one 5-7 season at Colorado is said to have the recruiting touch, so it will be interesting to see how Michigan State will fare in terms of talent by the time the Irish play them again.

While the future of the Spartans will not concern the Irish until 2026 when they meet again in South Bend, this has been one of the better, but less known rivalry for fans of the modern day Irish.

The Battle For The Megaphone Trophy

The rivalry really began when they began playing for the Megaphone Trophy back in 1949.

Since then, the Irish lead the trophy series with 35 total wins (including 2012-13 which were later vacated). The Spartans have left victorious on 27 occasions, and of course the single tie in 1966 was dubbed “The Game Of The Century.”

But for today’s fan, this series has been back and forth since 2000 deadlocked at eight wins a piece.

Charlie Weis’ makes his home debut and guarantees a win against the Spartans.

Not only did the Irish lose, but Weis became the third head coach to lose his first home opener. The other two? Elmer Layden and Lou Holtz. To add insult to injury MSU planted the flag at the 50 yard line and claimed their territory.

The Irish reached #5 in the polls that year with wins over #3 Michigan, #23 Pittsburgh and #22 Purdue and ultimately lost to Ohio State in the Fiesta Bowl.

Had the Spartans not upset the then ranked #10 Irish, the stars may have aligned for a national championship rematch of ND/USC after the “Bush-Push” loss.

This may be my favorite Notre Dame game of all time. I have the VHS recording somewhere that shows Brady Quinn and the Irish battling it out with Drew Stanton and the Irish.

Heading into the game fresh off the Michigan loss a week prior, the Irish came out flat in prime time going down 17-0 in the first quarter.

The Irish started to get some momentum going after a Quinn touchdown to Rhema McKnight – only for Quinn to throw a pick six on the ensuing drive. When Notre Dame scored, Michigan State answered.

The Irish battled back with a 19 point fourth quarter to outlast the Spartans.

Something about a Saturday in September when these two teams have faced off, the Irish led by Jimmy Clausen with Kyle Rudolph, Michael Floyd and Golden Tate at his disposal take care of business at home.

Kirk Cousins nearly led his Spartans to a victory, but the Clausen hit Tate for six with just under six minutes remaining to get the “W.”

As the story goes, the Spartans and Irish went toe-to-toe once again in a back and forth bout. For every score, the opponent answered. Neither team pushed a lead beyond a single possession.

With the Irish settling for a field goal in overtime, Michigan State had their work cut out for them.

After the Irish made a stand, the Spartans lined up for a field goal and Dantonio’s team, fourth down, game on the line run the fake field goal to perfection to stun the Irish.

The Spartans finished the year 11-2.

Part of being a rival, is making sure that if you do not end up playing for the national championship, that you end any hopes of your rival too.

Of course, on the 21st of September, there was no way to know this would be the case.

Either way, defense held the Spartans to only 13 points, and Tommy Rees and company were able to do just enough to give the Irish a win.

The Spartans went on to win the Big 10 Championship and Rose Bowl in one of Dantonio’s best seasons. In retrospect, the Irish may have very well blocked MSU from a national championship appearance.

Between Auburn and Florida State, the Spartans would have stood a serious chance.

Hopefully the battle for the Megaphone Trophy resumes moving forward as it has been one of the better rivalries for the Irish.