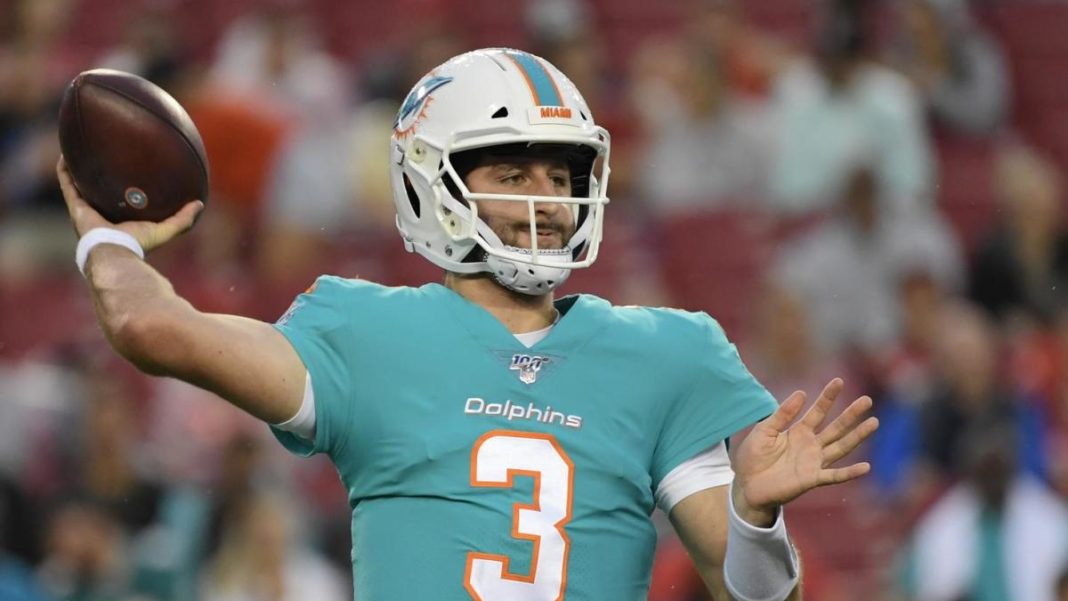 It is no surprise that the Chicago Bears will be looking to add a quarterback this offseason through the draft or free agency. The team want someone to compete with current starter Mitchell Trubisky for the 2020 season. One possible name that could be answer, but more so an indication on just how good Matt Nagy and his coaching staff is, would be Josh Rosen.

The former 10th overall selection in the 2018 NFL Draft has had a forgettable first two seasons in the league. Rosen was drafted by the Arizona Cardinals only to be traded following his rookie season to the Miami Dolphins. In Miami, he failed to beat out Ryan Fitzpatrick for the starting job, was named the starter in week 3, and benched again in week 6.

In 19 games, Rosen has thrown 12 touchdown passes and 19 interceptions. He has only won three of his 16 starts in his first two years in the league. Although Rosen may look like a failed first-round draft selection, he could be a product of poor coaching and a poor support system.

Both the teams that Rosen has played for the last two seasons have had first-time NFL head coaches with extensive defensive backgrounds. Steve Wilkes was let go by Arizona after just one season following 2018. The Cardinals then hired the offensive-minded Kliff Kingsbury with the sole purpose to develop Kyler Murray but moved on from Rosen immediately. It forced the sophmore quarterback to learn a completely different playbook with a completely new cast of running backs and receivers. Furthermore, Miami made it clear that they had no intention of winning in 2019 as they traded key players for draft picks before the season started.

Rosen could be the perfect case study for Nagy and the Bears coaching staff. Following the disappointing end to the 2019 season, Chicago hired multiple coaches with quarterback experience to get the most from the position in 2020. Nagy hired Bill Lazor as the new offensive coordinator, John Defilippo as the new quarterbacks’ coach, and promoted Dave Ragone to the passing game coordinator role. General manager Ryan Pace could trade a late-round draft pick for the former first-round pick and provide Rosen an opportunity to work in a quarterback friendly system.

If Nagy and the coaching staff could unlock the potential that a majority of NFL teams saw in Rosen leading up to the 2019 Draft, the Bears could be in tremendous shape going forward. It would allow the team to part with Trubisky if he is unable to improve in his fourth season and not be in a perplexing situation. Chicago would have three seasons of control with Rosen, which would allow them to readjust their salary cap needs in 2021.

Chicago would provide Rosen with an ideal group of offensive weapons with duel-threat running back in David Montgomery along with two quality wide receivers in Allen Robinson and Anthony Miller. The situation would also prove just how good Nagy is at developing quarterbacks. If he fails to develop two first-round quarterbacks, it would speak volumes compared to if Trubisky were to fail and Rosen were to be successful.

The biggest concern with Rosen hasn’t been his physical ability or whether he can process the game, but whether he loves the game. His biggest weakness coming out of college was if his heart was truly dedicated to football. Given the situations he has been in the last two seasons, many would question if he has any motivation left. Nagy and his coaches could provide rejuvenation for a young quarterback that has been given a raw deal.

If Chicago were to trade for Rosen, it should viewed as a test to see just how good this quarterback minded coaching staff truly is. Image the praise and recognition both Pace and Nagy would receive if they assisted in turning Rosen’s career around. The Bears could get a first-round talent for a late-round cost as it could be the true tell whether or not the team has the right people in the building.