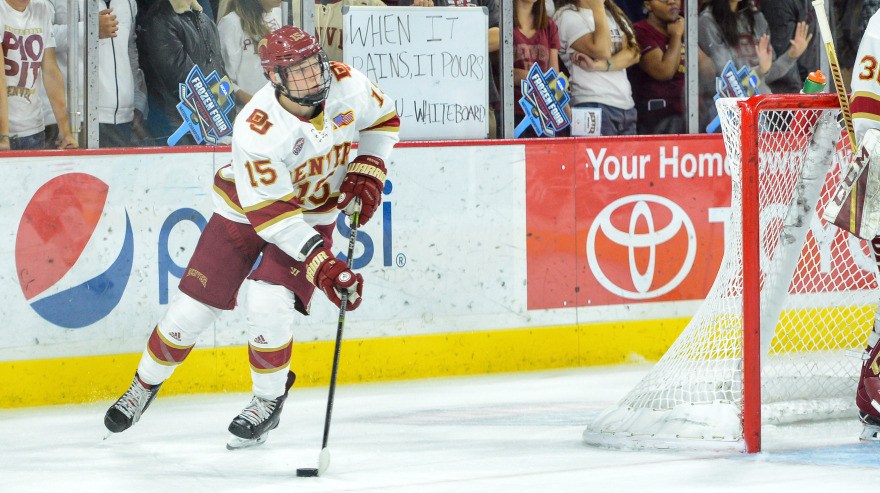 Mitchell, 21, is currently serving as captain at the University of Denver in his junior season.

Chicago Blackhawks top prospect Ian Mitchell has yet to sign his entry-level contract, but he’s reiterated that he remains committed to the team that drafted him. Last summer, Mitchell made a somewhat curious decision to return to Denver for a third season in an attempt to win a second national title.

“I want to sign with the Blackhawks, and [as] soon as I can do [so] is going to be the plan,” Mitchell said. “But I just want to focus on winning a national championship for now, and whatever happens after the season will take care of itself.”

Mitchell’s decision to return to college has paid off so far. The Blackhawks second-round pick (57th overall) in 2017 has eight goals and 19 assists for 27 points in 32 games this season. Denver also is currently No. 6 in the national rankings with a 19-8-5 record.

In Mitchell’s freshman campaign back in 2017-18, the 5-foot-11, 174-pound defenseman tallied 30 points (2G, 28A) in 41 games en route to Denver’s first NCAA championship since 2005. However, the St. Albert, Alberta native saw his offensive production take a small step back in his sophomore year, which is likely the reason he returned. Mitchell did see an increase in goals with six, but he finished with 27 points and a 0.69 points-per-game average (0.73 the year before).

When asked about the biggest difference in Mitchell’s play this season, Denver coach David Carle spoke about his confidence and consistency.

“He’s more himself consistently, if that makes sense,” Carle said. “He’s making a high-level impact on a more regular basis, which makes him good and helps his team win.”

Mitchell has also grown as a leader this year due to his captaincy. While he did serve as an alternate captain for Denver last season, being the go-to-guy in the locker room for one of the premier college hockey programs in the country is A LOT different. The young blueliner has handled it well to this point, and he believes this experience is crucial to his development as an NHL player.

“As the year’s gone on, I’ve become more comfortable with [leading] and learned more things about being a leader, when it’s time to speak up or just sit down and let the team figure it out for themselves,” Mitchell said. “That only can be learned through experience, so that’s something that hopefully will be able to translate to the next level for me.”

The Blackhawks are also hopeful that Mitchell’s extra year with Denver will help his game translate to professional hockey. There is still a bit of a logjam of defenseman within the organization, but a lot will change before the start of next season. If all goes well, Mitchell could be a part of the opening day roster in October.

For the fans, here’s a quick glimpse of the offensive skillset Mitchell brings to the table. Enjoy.