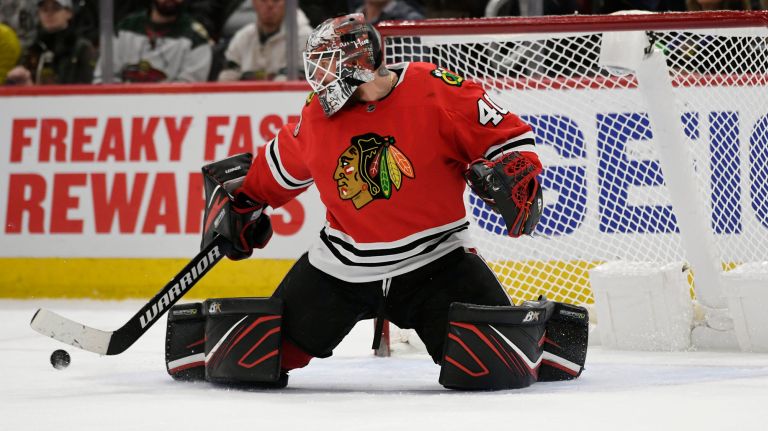 The 28-year-old netminder is set to become an unrestricted free agent on July 1st, which likely cost the Blackhawks a better return.

Lehner played in 33 games with the Blackhawks this season, posting a 16-10-5 record with a 3.01 goals-against average and .918 save percentage. Although Lehner’s tenure with the Hawks was a short one, he will always hold a special place in the heart of many fans. He had this to say on Twitter moments after the trade was announced:

Lehner is expected to be a rental for the Golden Knights, but the odds of the Blackhawks re-signing him during free agency is low. If the two sides were close to an extension in recent weeks, then Lehner likely wouldn’t have been moved.

According to The Athletic’s Mark Lazerus, Lehner offered to sign a three-year contract extension for less money to stay with the Blackhawks, but he never received such an offer from the front office. If this is true, General Manager Stan Bowman needs to take a long look in the mirror. Elite goaltenders don’t grow on trees, and if there was ANY chance to bring back Lehner, Bowman should have done everything necessary to do so.

As for the return, it wasn’t going to be what most fans hoped for due to Lehner’s current one-year deal. The only way the Blackhawks were going to get a first-round pick for Lehner was if he was going to sign an extension with the acquiring team. That wasn’t the case with Vegas, so a 2020 second-rounder is understandable.

The prospect that was unnamed for about an hour turned out to be 19-year-old defenseman Slava Demin, who has spent the last two seasons on the same defensive pairing as top Blackhawks prospect Ian Mitchell at the University of Denver. Demin was a fourth-round pick (99th overall) of the Golden Knights in 2018 and is currently a sophomore for the sixth-ranked Pioneers.

The final piece of the trade was 26-year-old netminder Malcolm Subban. Corey Crawford will carry the load in net for the Hawks going forward, but there’s a good chance Subban could get some looks down the stretch as well. With the future of the goaltender position remaining a mystery for the Blackhawks, it doesn’t hurt to throw another name in the mix.

Subban, a pending restricted free agent, has struggled mightily in 2019-20, though. Despite playing with a defensively-sound bunch in Vegas, Subban’s posted a sub-.900 save-percentage in 20 games on the season. Not to mention a 3.18 goals-against average.

The Blackhawks managed to turn Robin Lehner and Erik Gustafsson into just a second-round pick, a third-round pick, defenseman prospect Slava Demin, and goaltender Malcolm Subban, so it’s hard not to be upset with the front office. There were also reports that Lehner would have taken a discount to stay with the Hawks, but of course, Bowman didn’t even give it a try. As a result, yet another superstar gets traded out of Chicago.