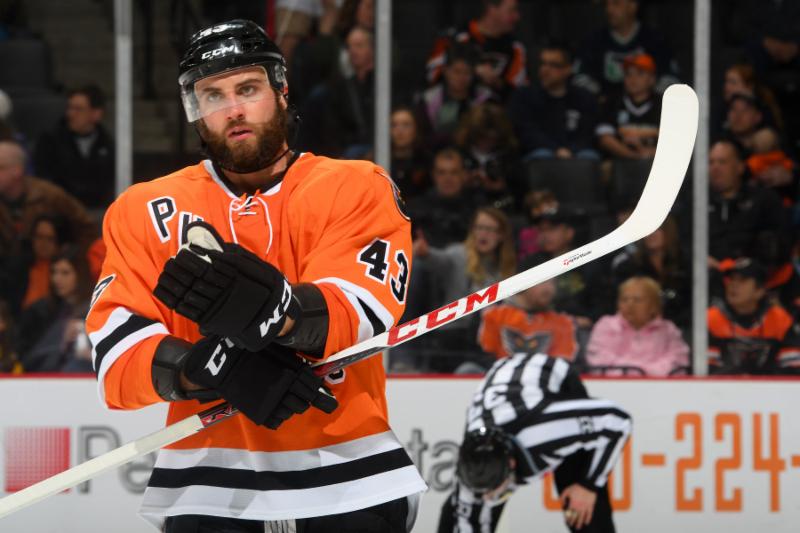 The Blackhawks sent 2016 fourth-round pick Nathan Noel to the Philadelphia Flyers in exchange for the veteran defenseman.

After the Chicago Blackhawks traded defenseman Erik Gustafsson to Calgary and goaltender Robin Lehner to Vegas, General Manager Stan Bowman made one final move to reacquire minor-league defenseman, T.J. Brennan. The 30-year-old blueliner will report to the Rockford IceHogs of the American Hockey League, where he played 54 games during the 2014-15 season.

Brennan has spent the majority of his professional career in the AHL, as he’s played only 53 NHL games across 11 seasons. His resume at the minor-league level, however, is quite impressive. Brennan won the Eddie Shore Award for AHL’s top defenseman in both 2014 and 2016 and has led all blueliners in scoring on three separate occasions. He’s been named an AHL All-Star five times as well.

The last couple of seasons haven’t been the same for Brennan, though. After recording at least 60 points in four consecutive campaigns, the 6-foot-1, 216-pound defenseman has declined in points in each of the last three years. He tallied just one goal and seven assists in 28 games for the Lehigh Valley Phantoms before the trade and hasn’t dressed since Jan. 10.

Brennan will become an unrestricted free agent on Jul. 1, and his current contract carries a minimal $675,000 cap hit.

As for Noel, the 22-year-old forward has yet to make his NHL debut and has struggled to remain at the AHL level. In 71 career AHL games for the Rockford IceHogs, Noel has just three goals and four assists.

Noel has spent the majority of this season with the Indy Fuel of the ECHL and has tallied 17 points (6G, 11A) in 39 contests. With his contract set to expire at the end of the year, the Blackhawks felt it was the time to move on from their fourth-round pick in 2016.

This move isn’t nearly as significant as the other two transactions the Blackhawks made on Monday, but it could play an important role for the IceHogs going forward. With Gustafsson now a member of the Flames, expect defensemen Adam Boqvist and Lucas Carlsson to remain with the Blackhawks for the remainder of the year. Gustafsson’s departure could have left Rockford with a shortage on the backend, but the addition of Brennan gives the team some much-needed depth.