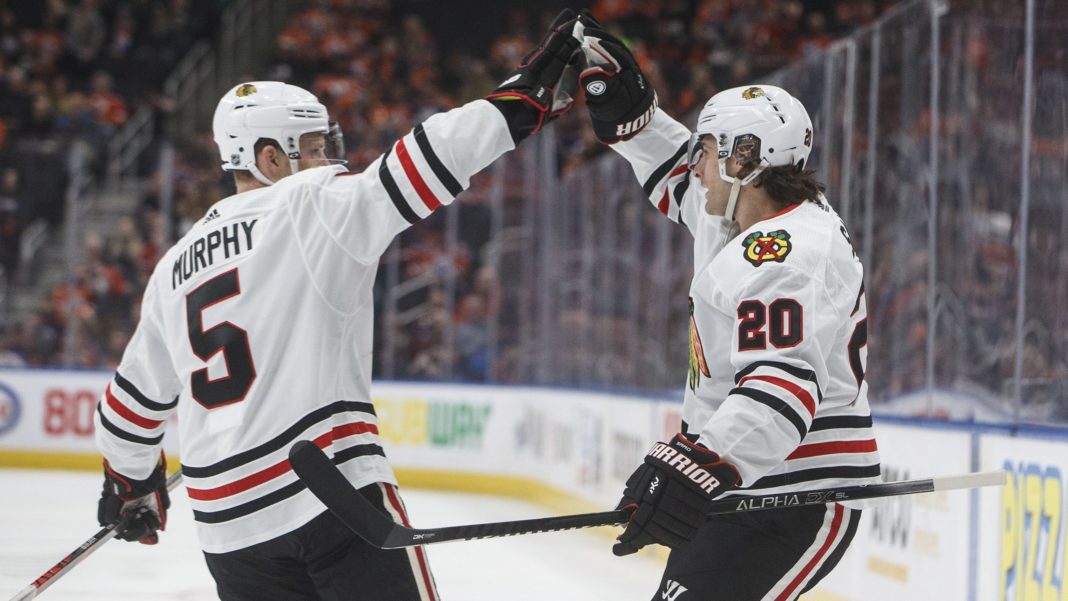 With the loss, the Blackhawks fall to 1-2-2 in five games since the NHL All-Star break.

The Chicago Blackhawks blew a lead for the third consecutive contest in their 5-3 loss to the Edmonton Oilers at Rogers Place on Tuesday night. Brandon Saad and Jonathan Toews scored to give the Hawks a 2-1 advantage in the first period, then Adam Boqvist stuck early in the second to regain a 3-2 lead, but the Oilers battled back to score three unanswered goals to finish the game.

Robin Lehner wasn’t his best in net vs. Edmonton, as he allowed four goals on 30 shots to pick up his third loss in a row. Lehner hasn’t won a game since Jan. 19 vs. Winnipeg, which is nearly a month ago.

“It was a tough one to let slip away from us,” Lehner said. “They were pretty good in the first period, they had a lot of high-quality chances and they got four goals off of Grade-A scoring chances and rebounds. I would like the puck to stick with me a little better, but I thought every one of those goals was a high-scoring chance.”

Tuesday’s loss marked the first time this season in which the Blackhawks have gone winless in four consecutive games. The Hawks are now 25-23-8 through 56 games and remain six points back of the Arizona Coyotes for the second wild-card playoff spot.

The opening 20 minutes have been a problem for the Blackhawks lately, and that trend continued against the Oilers. Riley Sheahan gave Edmonton a 1-0 lead just 1:13 in after Alex DeBrincat got torched in transition by Josh Archibald and then failed to cover the front of the net successfully.

The Blackhawks answered back less than five minutes later as Patrick Kane made an unbelievable turn-around feed to Saad backdoor for his 17th goal of the season. Saad has six goals in eight games since returning from injury on Jan. 18.

After the Blackhawks were caught with too many men on the ice for the 94th time this year, Ryan Carpenter found Toews on a 2-on-1 shorthanded rush for his 15th goal of the season at 14:19. Olli Maatta made the whole play happen by breaking up an Oilers rush in the defensive zone, which allowed the Hawks to counter in transition.

It is no secret that the NHL’s officials haven’t been so kind to the Blackhawks recently, and Tuesday marked the third game in a row that the Hawks were hit with a phantom penalty call. Toews was called for tripping Sheahan late in the first, even though video replay clearly showed the linesman was the one who tripped him.

Of course, Edmonton went on to tie the score 2-2 on the ensuing powerplay as Kailer Yamamoto jumped on a Lehner rebound at 17:18. Toews immediately skated to the officials in disgust after exiting the penalty box.

“It’s kind of the way things go when you’re not winning,” Zack Smith said. “There’s not many calls that teams agree with if it’s called against them. Besides the goal called back [vs. Boston], beyond that it’s all been up to us, can’t blame any of that on the refs.”

The Oilers found the back of the net less than two minutes into the first period, and the Blackhawks did the same in the second when Kane made a terrific backhand pass to set up Boqvist on a 2-on-1 rush for his fourth NHL goal.

The Hawks 3-2 lead didn’t last long, as Yamamoto tied the score for the second time at 3:38 after Dominik Kubalik failed to clear the puck out of the defensive zone. Lehner appeared to have control of the puck, but it just squeaked out from under him to give Yamamoto a tap-in goal.

After the officials called Smith for a questionable slashing penalty, Ryan Nugent-Hopkins gave the Oilers a 4-3 lead at 4:50 on the powerplay off yet another Lehner rebound. It would be unfair to blame Lehner solely for these goals, though, as the Blackhawks defense wasn’t great in front of him throughout the contest.

The Blackhawks put together a strong comeback effort in the final 20 minutes (they outshot Edmonton 18-5), but they weren’t able to find a way to beat Oilers’ goaltender Mike Smith.

“We had a very good third, had desperation in our game,” coach Jeremy Colliton said. “We had some chances and our play was better, but the first two periods were very much up and down and I think there were portions of the first 40 minutes where we were really good and might take control of things. But we weren’t sharp all the time [and] they made us pay.”

Colliton made significant changes to both powerplay units after Sunday vs. the Jets, and the Hawks put together their best man-advantage in a few games during the third period, even though it didn’t result in a goal. Kubalik got a chance to play with the top unit, and he rifled off a couple of one-timers on Smith to create rebound opportunities. It will be interesting to see if Colliton keeps Kubalik in the same role going forward.

Even though Connor McDavid didn’t play on Tuesday, the Hawks defense wasn’t able to key-in and stop Leon Draisaitl. The No. 3 pick from 2014 tallied the empty-net goal and three assists en route to the 5-3 victory.

“Draisaitl was really good tonight, making a lot of plays,” Kane said. “Seems like he has chemistry with [Ryan] Nugent-Hopkins and the Yamamoto kid. That line’s been good for them and they were really good tonight. We knew they were going to create some, but it would have been nice to limit their chances a little bit more.”

The Blackhawks are right back in action on Wednesday night vs. the Vancouver Canucks at Rogers Arena for their third of five consecutive games on the road in Canada. The Canucks are currently atop the Pacific Division with a 31-21-5 record for 67 points through 57 games.

These teams have met on two separate occasions already this season, with each game being a high-scoring affair. The Blackhawks won the first meeting at the United Center 5-2 back on Nov. 7, while the Canucks won the most recent contest 7-5 at home on Jan. 2.