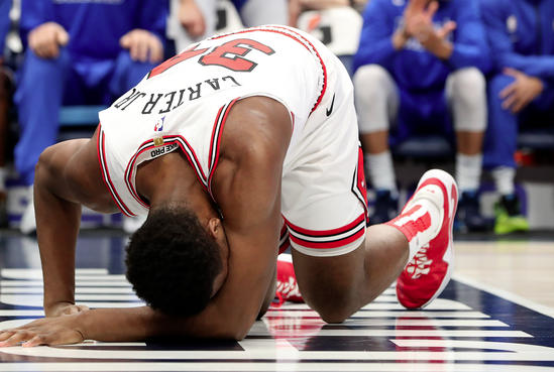 The Bulls lost their fourth straight game Monday to the Dallas Mavericks 118 – 110. The Mavericks young superstar, Luca Doncic, was just too much to handle as he dropped 21 points on the struggling Bulls in the third quarter and finished the game with 38 points, 11 rebounds, and 10 assists.

Wendell Carter Jr. suffered what appeared to be a serious ankle injury after landing on the foot of Dallas Mavericks forward, Dwight Powell. Carter Jr. left the game in a wheelchair after just 18 minutes and had six points and six rebounds.

The Bulls cannot afford to lose Carter Jr. for an extended period of time considering he’s probably their most consistent player so far this year. He’s averaging a double-double each night (11.9 points and 10 rebounds) and has 17 double-doubles in his 36 games.

According to Bulls reporter KC Johnson, Carter Jr. was seen using crutches in the locker room and will undergo an MRI on Tuesday.

Bulls’ rookie Daniel Gafford played heavy minutes in place of Carter Jr. despite rolling his ankle in the second quarter. Gafford was able to “walk it off” and finished the game with 11 points and six rebounds in nearly 25 minutes.

Expect Gafford to get increased playing time at the center position as it appears Carter Jr. will miss multiple games in the coming weeks.

Gafford and the Bulls will try to stop the bleeding Wednesday night against the Pelicans in New Orleans.