Notre Dame and nail biter seem to go hand in hand and that proved to be no different in the 2010’s. Let us take a short walk down memory lane and relive the top 10 games over the past decade. 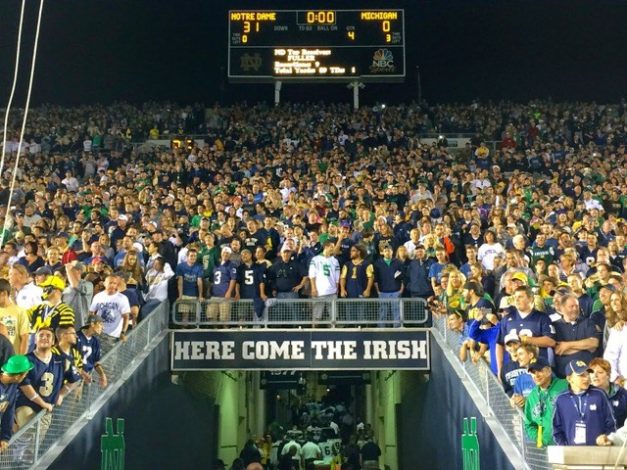 This one needs no introduction or explanation, really. Everett Golson returned from his season long suspension and took it out on the Wolverines.

Will Fuller also had a cool nine catches for 89 yards with a 24 yard touchdown catch just before the half to give the Irish a 21-0 halftime lead. 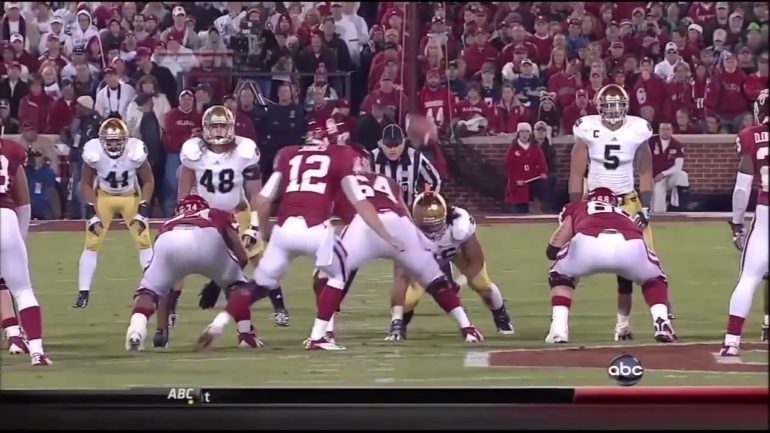 Big games have always been a tough spot for the Irish under Brian Kelly. But for once, Notre Dame went on the road to beat the eighth ranked team in the nation.

Notre Dame was undefeated and ranked fifth at the time, so perhaps it was not an upset but they were still the underdog.

The win was enough to propel the Irish to the number one spot just weeks after in the AP Polls, back in Week 12 of 2012. This marked the first time the Irish sat atop the poll since Week 12 of the 1993 season.

Just after the Irish broke the 13-13 tie with a one yard sneak by Golson, then Heisman candidate Manti Te’o forced a timely interception with under five minutes to go in the fourth quarter.

This allowed the Irish to pull ahead and build a two possession lead and ultimate leave Norman, OK victorious. 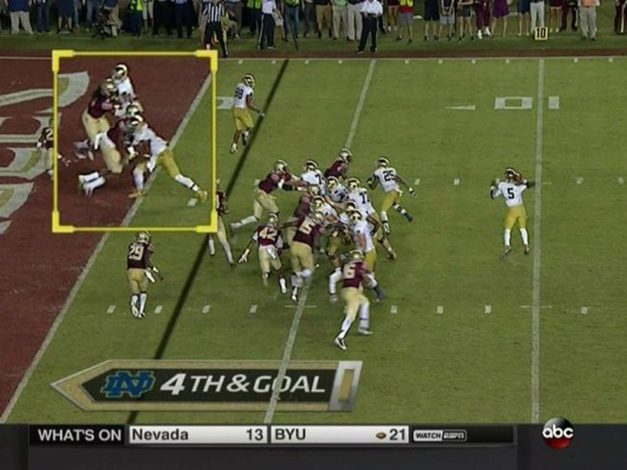 The Fighting Irish traveled down to Tallahassee, FL as the number five team in the nation, but were pitted against the number two Seminoles for a late season tilt that would derail the 2014 football season.

Notre Dame actually had control of the game with a 17-10 halftime lead, and held the lead until FSU overtook the Irish with 7:39 remaining in the game. The two teams traded punts which gave the Irish just under three minutes to drive 50 yards.

Then, on fourth and goal at the two yard line – with only :13 seconds remaining the Irish lined up and completed a pass to Corey Robinson and a sure Irish victory.

Uh-oh, a yellow flag. What the fuck!

After the play was reversed, the Irish were backed up to the 18 yard line and eventually picked off by Jacob Pugh to slam the door shut.

It is crazy to look back now and see the Irish nearly escaped with a victory over a team that consisted of Dalvin Cook at running back, Jameis Winston at quarterback. Tarean Folston out rushed the entire Florida State team, although Karlos Williams found the end zone twice – both punched in on the goal line. 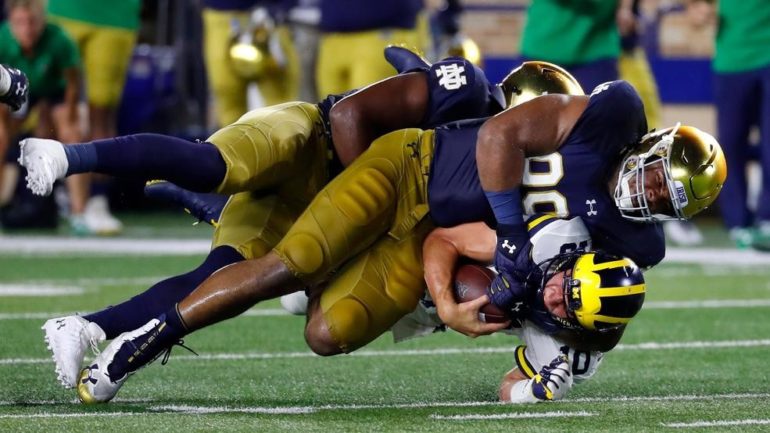 I am hesitant to ever compliment Jim Harbaugh or the Michigan Wolverines but I will say, this was one hell of a game from both sides. Imagine a better scene in college football. Prime time, College Game Day on campus against a bitter rival.

At the end of the day the defense came to play for the Irish after Shea Patterson just could not get into a rhythm. Julian Okwara had his second career interception after tremendous pressure by LB Te’von Coney.

The interception allowed the Irish to take a 24-10 lead into the fourth quarter and keep the pressure on the Wolverines.

Finally, defensive centerpiece Jerry Tillery was able to force a Patterson fumble with under a minute to go. Coney recovered the fumble and put the kibosh on a Michigan come back. 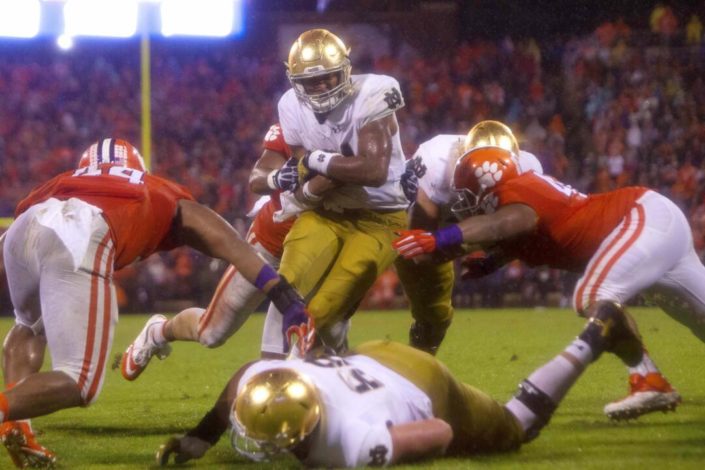 The game was an instant classic. The Irish fell behind early due to miscues and turnovers and went into the locker rooms with 14-3 deficit to overcome. As field conditions worsened, Notre Dame started to gain some traction, but it was too little too late.

The Irish yielded another touchdown before they woke up, a three yard touchdown run to Deshaun Watson. Watson was held to 84 yards passing. He made up for it with 93 rushing yards and finished with three total touchdowns.

CJ Prosise and DeShone Kizer got the scoring started for the Irish finally getting on the board early in the fourth quarter with a 56 yard touchdown catch and run but failed the two point try.

The Irish stormed back and struck quickly to make it 16-24 with nine minutes left. The momentum creeping towards an upset for ND.

Finally, with :07 seconds remaining, Kizer finds Torii Hunter Jr for a one yard score, but came up short on the two point conversion.

Kizer, though, nearly stole the show. He had 376 total yards and three touchdowns but in heart breaking fashion lost the game.

Clemson went on to lose to Alabama in the College Football Playoff Championship game in a 45-40 shoot out. 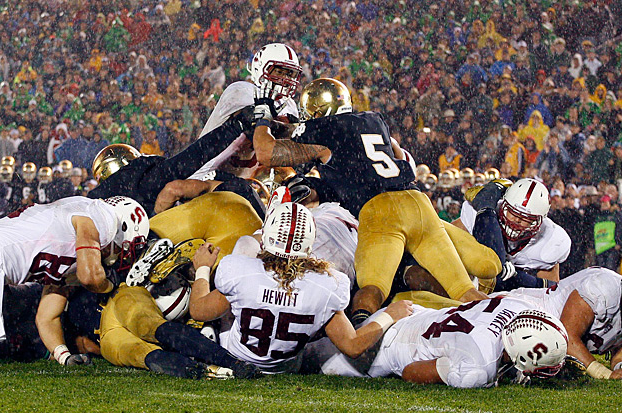 Notre Dame has often struggled with Stanford while on the road – but this game was played at Notre Dame.

Nonetheless as the rain poured down the game started to slip away from the Irish. Golson was ineffective all game, but things took a turn for the worse when he was knocked out of the game and had to be relieved by none other than one Thomas Rees.

Rees was able cap off the 12 play 79 yard drive to get Kyle Brindza a chip shot field goal attempt to send it in to overtime tied up 13 a piece.

The Irish started with the ball and immediately Rees took a sack. Eventually Rees was faced with a 3rd and 8 – the Cardinal sent the blitz but Rees – who is known to be a smart player, tossed one up and Theo Riddick hauled it in for 16 yards. On the following play, Rees found TJ Jones for six points.

Stanford’s passing offense sputtered early in overtime but the running game saved them breaking off two consecutive 13 yard runs after a five yard loss to start the period.

Now with a 1st and Goal to go situation, Stanford tried to run it right through the heart of the defense.

Since a win gave the Irish a perfect record halfway through the season, this was one of the many games of 2012 that the ball bounced the way of the Irish. 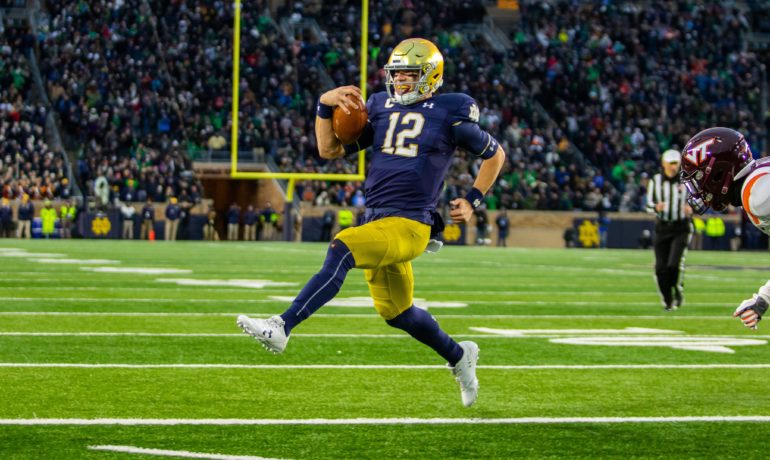 Give credit where credit is due. Notre Dame fended off a hungry Virginia Tech team. The Irish seemed a bit dejected coming off a deflating loss to Michigan where nearly nothing went right.

The game took an untimely turn when the Hokies forced a fumble as the Irish were looking to go up 21-7. Instead, momentum was lost and the Irish went into the half tied 14-14.

Many questioned Ian Book‘s ability to lead the Irish – especially after already losing to Georgia and Michigan – the two games on the schedule that mattered. But, Book persevered through two bad interceptions.

This was Notre Dame’s game to lose and instead, the Irish put together an impressive 18 play 87 yard drive consisting of two fourth down conversions and the seven yard scramble on third and goal by Book to give the Irish a late 21-20 lead.

The Hokies proceeded to throw an interception with under :10 seconds remaining to who other than freshman phenom defensive back Kyle Hamilton. 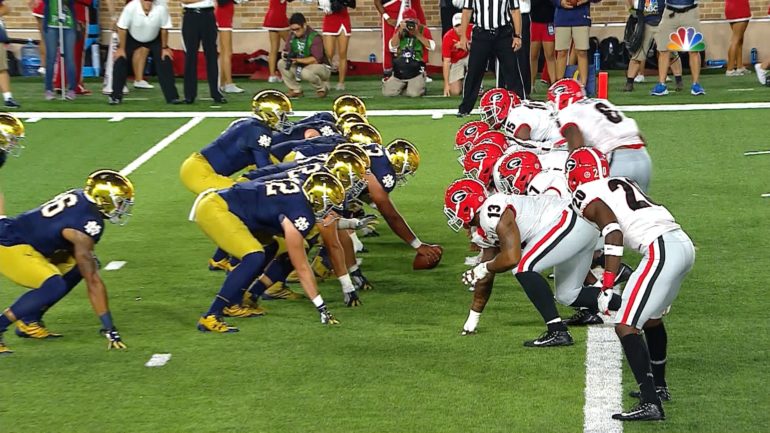 This was a tough loss, but what a freakin’ battle. Perhaps one of the most important takeaway now years later is that this marks the last time that the Fighting Irish lost a game at Notre Dame Stadium for the rest of the decade.

But the game itself was another game that the Irish put themselves in a position to win late, the teams battled back and forth, but the Irish led the Bulldogs at half by a score of 13-10.

The Irish forced a three and out with two minutes left and looked poised to get down into field goal range for Justin Yoon. But with 1:27 left to go, Brandon Wimbush took a huge sack – in the process fumbling away a chance to finish the drive and beat a Georgia team that has been fantastic since.

Georgia had a three headed monster at running back. Nick Chubb, Sony Michel and D’Andre Swift. Defensively they weren’t so shabby either – a familiar face for Chicago fans – Roquan Smith. 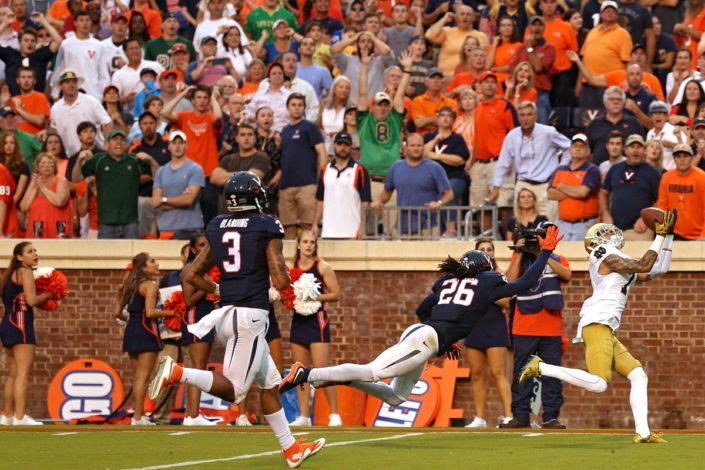 You could argue Notre Dame should have never been in the position to lose this game from the beginning yet they still blew a 26-14 lead.

To boot, starting quarterback in Malik Zaire goes down with a broken ankle with a minute to go in the 3rd quarter and we’re left with a young Kizer to save the day.

Save the day he did with a 39 yard strike to Fuller with 0:11 seconds remaining to put the Irish on top 34-27. Notre Dame has come up short in big spots before and despite playing down to the competition, they found a way to win in an exciting fashion. This was also Kizer’s coming out party. 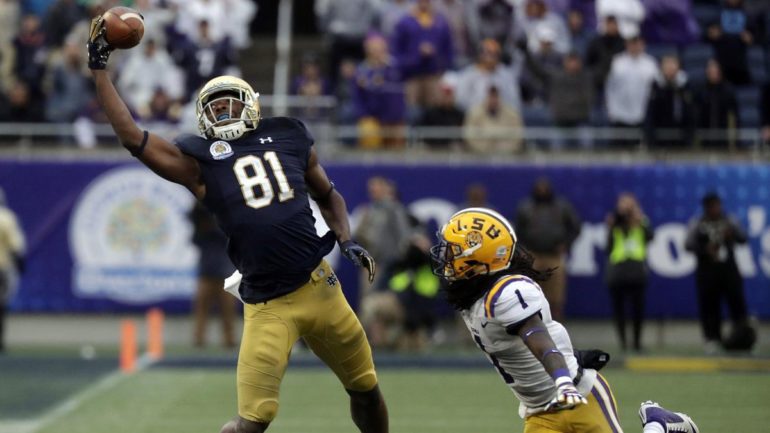 What both teams considered to be a bit of a consolation prize missing out on a premier bowl game, this was still a heavy weight fight.

LSU stumbled out of the 2017 season losing to Mississippi State as well as being upset by the Troy Trojans. It’s noteworthy that these Trojans did finish 11-2 on the year, so perhaps the Louisiana State University Tigers just drew an unlucky schedule that year.

After losing to Alabama later in the year, the damage had already been done. At this point you’re probably thinking, how does Notre Dame beating a down-LSU team go down as the best game of the decade.

The truth of the matter is, LSU still beat some damn good football teams. Even so, experts pegged Notre Dame as three point underdogs.

This game started out slow – with Notre Dame coming out and turning the ball over on downs on a wet, Monday afternoon. The entire first half was about as sloppy and erratic as any half of football. LSU had three punts and two missed field goals while the Irish had two punts, a turnover on downs and a fumble.

In the second half, the Irish came out and forced a three and out but a fumbled punt return recovered by LSU gave them a short field and allowed the Tigers to take the lead. A lead that Notre Dame officially broke by way of a Miles Boykin 55 yard one-handed touchdown catch from Book with 1:28 remaining.

The Irish held off Ed Orgeron’s team and won the Citrus Bowl – sadly, the best bowl win for the Irish since the 1993 Cotton Bowl.

Although, beating LSU in 2014 was also pretty nice. Either way, an SEC victory in dramatic fashion is as sweet as any.

BREAKING: Notre Dame Navy Will Not Kick Off In Dublin