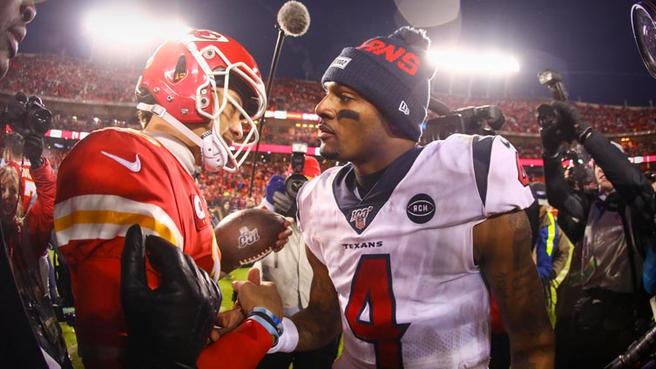 KANSAS CITY, Mo. — The AFC Divisional playoff game between the Houston Texans and Kansas City Chiefs at Arrowhead Stadium was colloquially dubbed “The Ryan Pace Bowl”. You might be asking why. Well, on the off chance you don’t know, here’s some history.

In 2017, Chicago Bears’ general manager Ryan Pace selected quarterback Mitch Trubisky at #2 overall, instead of Patrick Mahomes (who went #10), or Deshaun Watson (who went #12.) Since then, Trubisky has been bad, Watson has been better than bad, and Mahomes has looked like an all-time great talent.

Therefore, Ryan Pace made the wrong choice (in case Twitter hadn’t already warned you) and the Bears may waste a historically good defense (and championship window) because of it.

The Ryan Pace Bowl was one of the greatest football games I’ve ever watched. Just amazing. So, naturally, as a football fan (and obviously neutral Bears fan), I had some thoughts and observations that I wanted to share. Yes, they relate to the Bears. Follow me on Twitter @DhruvKoul to continue the conversation.

1. Everyone will look at the stat line and think it was some magical duel between Mahomes and Watson. It wasn’t. The Texans jumped out to a 24-0 lead (!!), but Watson only helped engineer 17 of the points — and 7 of THOSE came on a short field set up by a muffed punt. Once the Chiefs stormed back (led by brilliant offensive play all around from Andy Reid’s side), Watson generated a lot of production in garbage time. But even then, he was inaccurate often and had at least four dropped interceptions. He did make some beautiful plays/throws, but it was an overall ugly game for him. In fact, it was very Mitch Trubisky like.

People can say what they want and compare Watson and Trubisky, but Watson wasn’t in Mahomes’ class yesterday. And I don’t think he ever really will be. Mahomes and Andy Reid are an all-time great combination already.

(Note — I’m not saying Watson was the reason Houston lost. Not even close. But he did not elevate the team in a franchise manner yesterday. And that matters when evaluating these types of games.)

2. Andy Reid’s offense generated seven straight touchdown drives. I mean, Houston had absolutely NO answer for them. Even the first three KC drives that stalled, they stalled because of drops/KC mistakes. Receivers were wide open everywhere, the speed was on display, the strength was on display. Holy hell. Houston couldn’t do ANYTHING defensively all night. That offense was magical yesterday.

3. Former Bears ST coordinator Dave Toub has been interviewed and passed over for head coaching jobs often in his career. Yesterday, he put a bunch of “burn the tape” plays on tape. Special teams was the reason Houston was able to jump out to a massive lead in the first place.

And then, Toub’s unit helped bring them back: Mecole Hardman’s long kickoff return, the fumble recovery on a kickoff after scoring a touchdown, and strong coverage afterwards. It was a tale of two spurts for Toub.

I don’t know if he’s saved his head coaching prospects, but it was a wild game.

4. You see what happens in Andy Reid’s offense when a tight end gets involved? Granted, Travis Kelce is arguably the game’s best and most complete TE — but still. The offense runs through him. He was unstoppable (minus his third down drop on the first drive.) Matt Nagy NEEDS one of those in his own offense if it’s ever to be unlocked.

5. The Chiefs winning meant the Bears wouldn’t be able to interview QB coach Mike Kafka for a while for their open offensive coordinator role. And even then, with Chiefs’ OC Eric Bienemy not getting a head coaching job, it’s possible Reid and KC would’ve blocked Kafka’s jump back to his hometown of Chicago. So Nagy went ahead and hired Bill Lazor to be his OC today, instead.

6. Seriously, I’m very, very happy for Andy Reid, though. The legendary coach and offensive mind deserves a Super Bowl ring. He has a real chance to get back to the Big Game. I’m rooting for him.