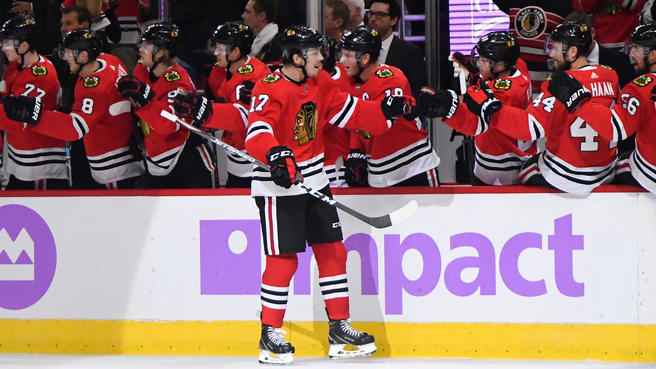 Strome hasn’t played since Jan. 7 against Calgary due to a gruesome-looking right ankle injury.

The Chicago Blackhawks returned to the ice for practice on Thursday afternoon in Arizona after eight days off for the NHL All-Star break. Forward Dylan Strome skated with the team for the first time after missing the final seven games before the break due to a right ankle injury.

Strome’s injury looked horrific at first glance, and there was fear that his season could be over. Even Strome himself admitted that he thought his leg was broken. The 22-year-old ended up missing just a couple of weeks and could play Saturday against the team the drafted him.

Coach Jeremy Colliton told reporters that Strome’s status for Saturday remains up in the air despite practicing in a full capacity. Strome joined his buddy, Alex DeBrincat, and David Kampf on the Blackhawks’ third line for line rushes. Colliton also decided to keep Strome on the wing during practice, as he did often in games prior to the injury.

The Blackhawks are hoping that Strome’s return to the lineup will help DeBrincat find his rhythm, as last year’s 40-goal scorer has just 12 tallies in 51 games. There is undeniable chemistry between Strome and DeBrincat that dates back to their days as Erie Otters, and their rekindling could be the spark that ‘Brinksky’ needs.

In 40 games for the Hawks this season, Strome’s recorded 10 goals and 20 assists for 30 points. The Mississauga, Ontario native also has a +3 plus/rating, which is among the best on the team. The only real trouble for Strome has come at the faceoff dot, as he’s won just 44.94% of his draws. Those struggles have forced Colliton to keep Strome on the wing instead of at center, which is where they want him long-term.

“We had a good stretch and we want to start a new one now,” Colliton said on carrying over momentum from before the All-Star break. “That’s how we’ve got to approach it. What happened before is over, let’s start on time here.”