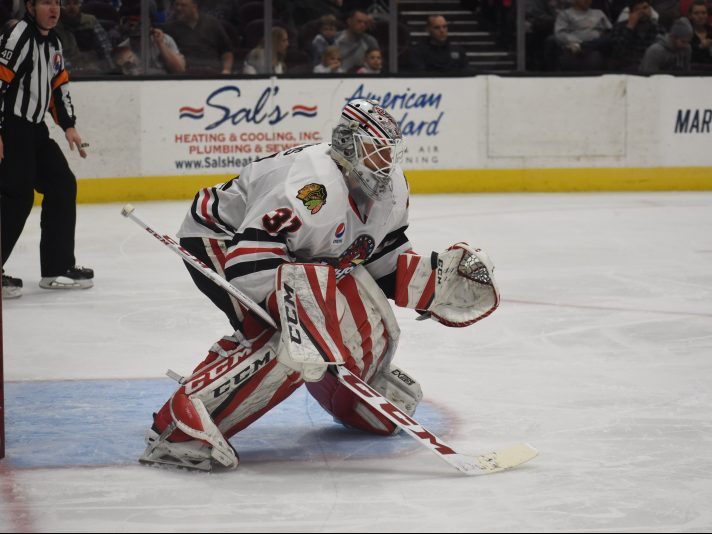 Tomkins, a seventh-round pick in 2012, is 5-4 with a 2.45 goals-against average and .916 save percentage in his second season with the Rockford IceHogs.

The Chicago Blackhawks and goaltender Matt Tomkins agreed to terms on a two-year, two-way deal worth $1.4 million ($700,000 AAV) that runs through 2020-2021 on Thursday. Tomkins will remain with the IceHogs in the American Hockey League, where he has been all season.

The 25-year-old netminder has only started nine games with the IceHogs this season, as there are limited starts to go around with Collin Delia and Kevin Lankinen also on the roster. Tomkins has been impressive when given the opportunity though, with the best goals-against average (2.45 GAA) between the three goaltenders (Delia 2.66 GAA, Lankinen 3.09 GAA).

Before turning professional in 2017-18, Tomkins spent four years at THE Ohio State University. Tomkins’ best campaign in Columbus came in his senior season, where he set four-year bests in starts (22), wins (12), and goals-against average (2.48).

Tomkins and Delia are the only two goaltenders in the Blackhawks organization signed under contract past this season. Robin Lehner appears to be the favorite to be re-signed over Corey Crawford, but anything can happen with Stan Bowman calling the shots. It will also be interesting to see if the Hawks bring back Lankinen, who is set to become an RFA this summer.