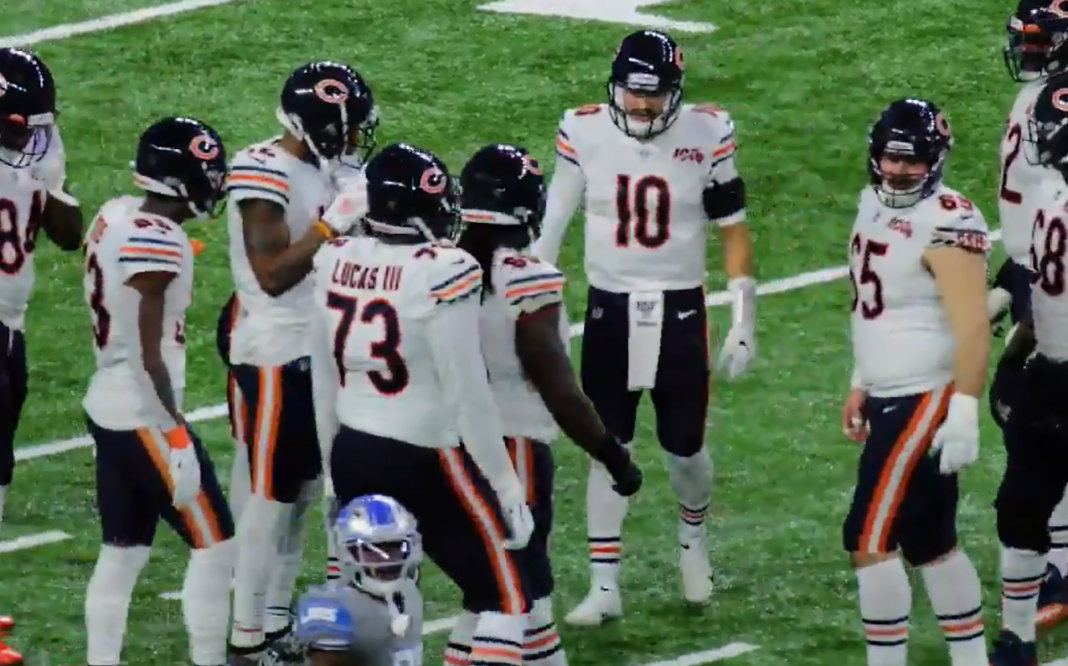 Mitch Trubisky certainly looked like a different quarterback against the Lions on Thanksgiving. He made a lot of throws that professional quarterbacks are required to make. Most of them coming when the Chicago Bears needed them most late in the game. The team was trailing and needed to score. The 25-year old, so embattled all year, deliver a number of picture-perfect throws to put them ahead 24-20 with two minutes left. The defense did the rest to cement the sixth win of the season.

Perhaps the best part of the entire affair? Trubisky was actually mic’d up for the game. So we got an on-the-ground view of what he was hearing, seeing, and saying throughout the action. His best moments definitely came on the final drive. The offense had 90 yards to go and six minutes left in the game. From the moment he entered the huddle, he was focused on the business at hand.

After completing his first big throw to Anthony Miller, he immediately started shouting at the offensive line to hurry up, urging them to keep the tempo. After again hitting Miller to set the offense up in 1st and goal, he urged his teammates to dig deep and finish the drive. A touchdown pass to David Montgomery soon followed.

It wasn’t like he relaxed after the drive either. Trubisky remained vocal on the sideline, urging the defense to go out there and slam the door shut. Put the game away. It took some time, but a Roquan Smith sack followed by an Eddie Jackson interception accomplished that goal. The Bears had secured the win, reaching 6-6 on the season with four games to play. The quarterback himself finished with 338 yards and three touchdowns and an interception.

It was his best performance of the year. A complete game where he seemed in total control from start to finish. That is the quarterback Chicago has wanted to see all year. It’s hoped that this isn’t the last we’ve seen of him too. The upcoming schedule will be the true test of how far he’s come or if this game was nothing more than an anomaly. If nothing else, it was fun to watch him work some of that late-game magic he’s been known for.