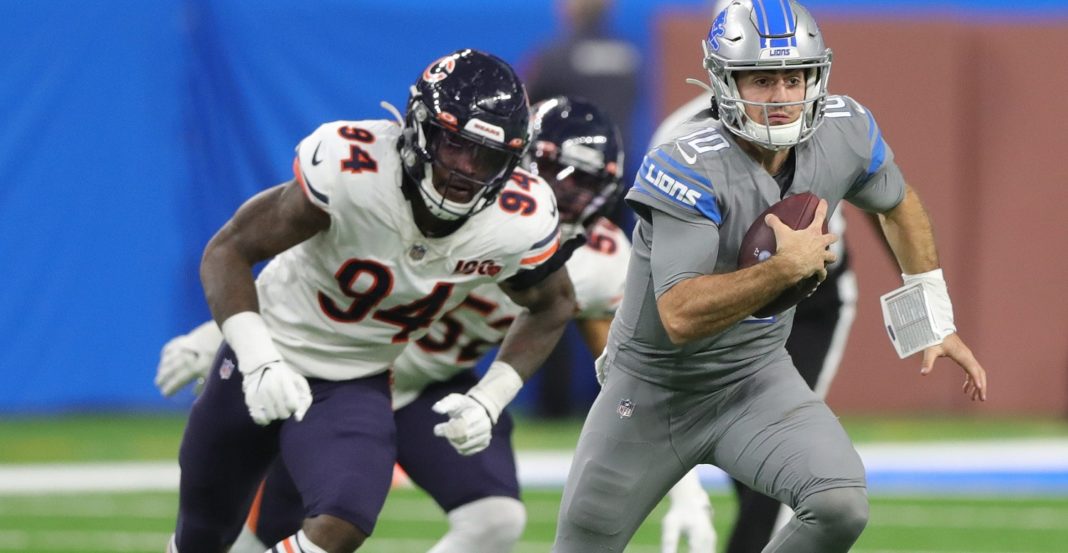 Leonard Floyd didn’t turn into the player the Chicago Bears hoped. That being a top pass rusher. Even so, he’s still carved himself out a nice role on defense with his coverage ability and knack for stopping the run. He’s not a star but he has value on this defense. One other thing people can’t say about him is he lacks toughness. The guy played with a broken hand for half of 2018 and it seems he had to battle through something even more painful on Thanksgiving.

Head coach Matt Nagy and defensive coordinator Chuck Pagano alluded to the fact that at some point in the game against the Detroit Lions he suffered some kind of serious rib injury. Enough to the point that when he received x-rays during the game, the training staff felt he wouldn’t go back in. This did not occur. Floyd made it clear to them and the coaches that the only way he was coming out at that point was on a stretcher.

Leonard Floyd plays through the pain for his team

Anybody who has suffered a rib injury understands they are extremely painful. Just moving around is difficult. Floyd not only did that. He willingly made physical contact with offensive linemen and made tackles. That is the caliber of toughness people talk about with NFL players. You don’t whine or complain. If you feel you can go, strap on the helmet and get back out there. Floyd did and helped the Bears pull off a much-needed victory.

It will be interesting to see how this injury affects him moving forward. The Bears are about to play a pivotal game against the Dallas Cowboys on Thursday Night Football. They boast two quality offensive tackles in Tyron Smith and La’el Collins. Not having Floyd at 100% will make life even harder for the front seven getting to Dak Prescott. One thing is for sure though. By all signs, there is no way the outside linebacker is going to miss that game.