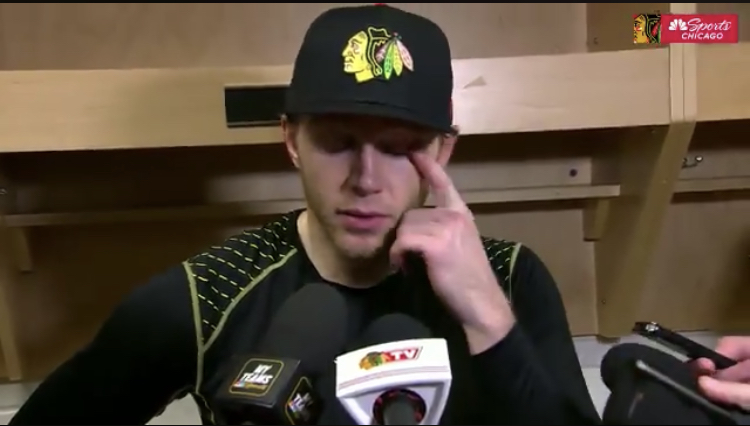 Despite having a full offseason and training camp, the Blackhawks have regressed since hiring Jeremy Colliton just over one year ago.

Chicago Blackhawks forward Patrick Kane said it best during his post-game interview on Tuesday night. The future hall-of-fame forward was visibly frustrated while talking to the media.

“I just feel like that’s kind of how it’s been going for us all year,” Kane said. “It seems like we take one step forward, two steps back a lot of the time. Just not consistent enough.”

Bingo, Mr. Kane. The Blackhawks currently boast a dreadful 4-7-3 record through 14 games, with just two of those victories coming in regulation. The highly-touted offense has scored more than three goals just twice on the season. The defense is about as mediocre as expected, and that’s a problem if the offense isn’t producing. Besides the goaltending department, Jeremy Colliton’s team has sternly underachieved so far in his first full season.

It’s been over one year now since Colliton took over for Joel Quenneville, and it’s mind-boggling as to how the team is worse than last season. Of course, it’s only been 14 games, but the Blackhawks have the fewest regulation wins in the league. Beyond the win-loss column, they rank near the bottom in several major statistics. According to Natural Stat Trick, the Blackhawks are 31st in the NHL in shots allowed per game (35.6), 30th in scoring chances for percentage at 5-on-5 (46.3), and 29th in goals for per game (2.36). To sum it up, the Blackhawks have been atrocious on both ends of the ice.

There have been flashes of improvement and chemistry at times this season, but consistency has been absent. There’s no telling what team is going to walk out of the locker room. One night the ‘Hawks are playing well against a 9-6 Ducks team, the next they’re getting dominated by the last-place San Jose Sharks.

After a solid second half under Colliton last year, the expectations were that the Blackhawks would at least compete for a playoff position in 2019-20. So far, those expectations haven’t been met, to put it pleasantly (insert Jim Mora playoffs GIF here). The odd part of it all is that the Blackhawks certainly have a better roster than they did last season. Stan Bowman did his part this offseason by addressing essentially every area of weakness. Olli Maatta and Calvin de Haan were brought in to shape up the backend. Bowman traded for both Alex Nylander and Dominik Kubalik for some much-needed scoring depth. Andrew Shaw was reacquired to provide the team with grit and versatility. Vezina Trophy finalist Robin Lehner was signed to solidify the goaltending position due to Corey Crawford’s inability to stay healthy in recent years.

The Blackhawks should be re-establishing themselves as playoff contenders after a noteworthy offseason, yet here they are with a 4-7-3 record to start the year. The rocky start has everyone in the organization on the hot seat, from President and CEO John McDonough down to coach Jeremy Colliton. Stan Bowman’s surely right there with them. It seems a little early to start abandoning ship, but hey, Joel Quenneville was fired when the Blackhawks were 6-6-3. If the Blackhawks continue to struggle in the coming weeks, no one is safe from top to bottom. Hopefully, it never comes to that, but the Blackhawks haven’t looked good through 14 games in Jeremy Colliton’s first full season.

For more Blackhawks news and updates, follow the author (@JackBushman2) on Twitter. Make sure to check out the author’s podcast, Talkin’ Hawkey, which can be found on Apple Podcast, Spotify, and Twitter (@TalkinHawkey).