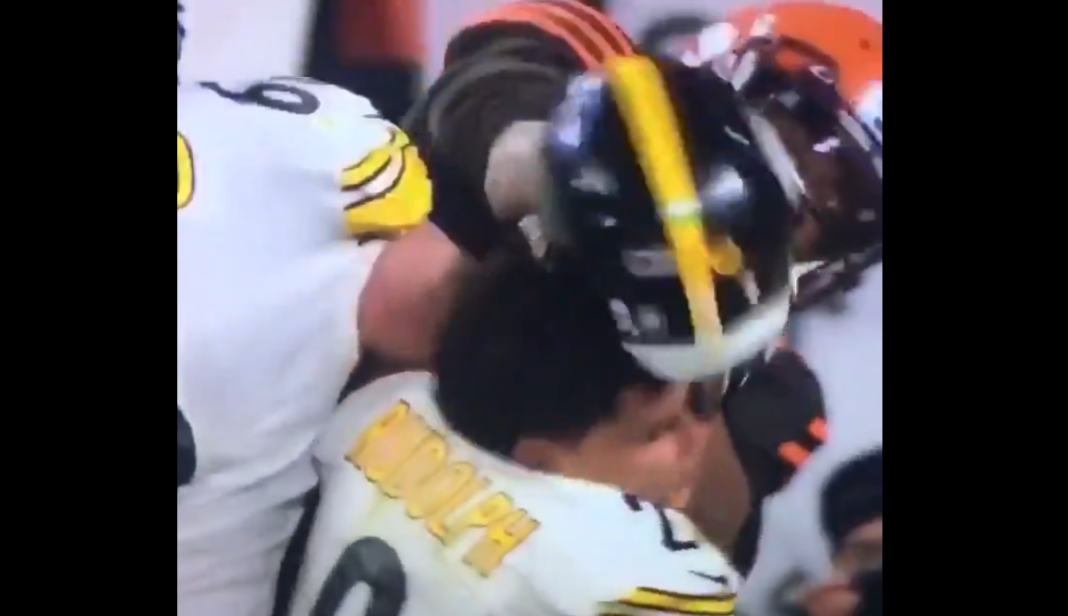 Many football fans were aghast at what they witnessed on Thursday Night Football this week. It was supposed to be an interesting divisional rivalry game between the Cleveland Browns and Pittsburgh Steelers. Both teams were fighting to get back in the playoff hunt. It should’ve been an exciting contest with some intrigue. Then Myles Garrett, the Browns’ star defensive end, turned it into the worst kind of spectacle in the span of just 30 seconds.

It took place late in the game. Cleveland was on their way to a 21-7 victory and Pittsburgh was trying to get back in the game. Steelers QB Mason Rudolph dumped a pass off in the flat to avoid a sack by Garrett who proceeded to take him to the ground even with the ball already gone. Rudolph took exception to that and tangled with Garrett as the two got to their feet. Then the defender snapped.

He grabbed Rudolph by the facemask, tore his helmet off and then literally swung it at him, clobbering the quarterback over the head.

It’s one thing for a guy to throw a punch or deliver a body slam. Garrett took it up several levels when he used a 6-pound object of hardened plastic and metal to almost decapitate a guy. There is no doubt that the defensive end faces a long suspension from the NFL. What some people wonder is whether it could go beyond that.

Now football is a game built around physicality. Players are inflicting damage on each other every play. However, one doesn’t need to be a genius to recognize what Garrett did went way beyond the confines of what’s acceptable in this league. So much in fact that there is a belief from some that he could face criminal charges for assault.

Michael McCann, a legal analyst for Sports Illustrated addressed the situation. He doesn’t think charges are likely but does admit there is a possibility.

“Although unlikely, Garrett’s strike on Rudolph could have a legal fallout beyond the NFL. The strike appeared to meet the elements of the crime of assault. Like in other states, assault in Ohio refers to knowingly causing or attempting to cause physical harm on another person. Use of a dangerous weapon can be added to the charge. While a football helmet isn’t a weapon per se, it takes the form of a weapon when used to inflict damage on another person’s skull.”

The general fear is bringing charges on Garrett might set an unwelcome precedent for the future in the NFL. So the desire would be to avoid bringing law enforcement into it and let the league handle the punishment. That means a long suspension and heavy fines. Is that justice? It depends on who you ask.