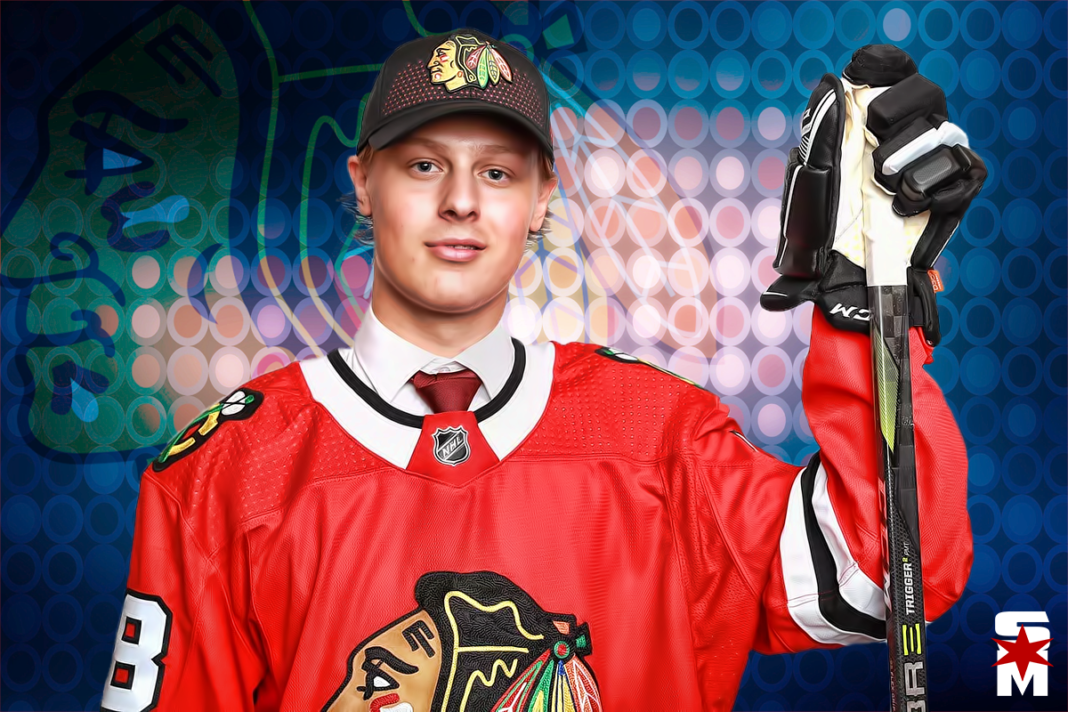 Boqvist strikes and Kane tallies the overtime winner as the Blackhawks pick up a much needed two points in Anaheim.

The Chicago Blackhawks picked up their first road victory of the 2019-20 season on Sunday night by defeating the Anaheim Ducks 3-2 in overtime. Adam Boqvist and Alex DeBrincat scored the two Blackhawks goals in regulation, and Jonathan Toews made a beautiful backdoor pass to find Patrick Kane for the game-winner just 24 seconds into the 3-on-3 period.

As for Boqvist, it took the 19-year-old defenseman just four periods to find the back of the net. He received a pass in the high slot from Alex Nylander and made no mistake about it for his first career tally.

Boqvist looked comfortable in his second NHL game with a much better defensive performance. The 2018 No. 8 pick was on the ice for 16 shots attempts for to just seven shot attempts against on Sunday night. Boqvist also put three shots on goal and moved the puck well on the Blackhawks’ second powerplay unit. He couldn’t help but smile talking to reporters about his experience after the game.

“It’s happened so quick and everything. There’s so much in my head right now. I just got called up four days ago. So I’m just going to go with the flow,” the Swedish defenseman said. “It’s a dream.”

Alex DeBrincat recorded his fourth goal of the season during a 5-on-3 powerplay to make it 2-0 Blackhawks in the first period. Patrick Kane made a terrific pass cross-crease to give DeBrincat a wide-open net for his seventh career goal against the Ducks.

The Blackhawks powerplay found the back of the net for the second consecutive game after failing to score on the man advantage in the previous six contests. Both units looked sharp once again, as coach Jeremy Colliton kept Toews with Dach, Kubalik, Nylander, and Boqvist on the second grouping. Despite the success in the last two games, the Blackhawks are still 28th in the NHL on the powerplay with a mere 12.8% conversion rate.

The defense was better on Sunday night than it had been in the last two games, but the Blackhawks were still on their heels in the second half of the contest. The Ducks managed to put 38 shots on Robin Lehner, who stood on his head yet again to keep his team in the game. Still, Anaheim was able to tie it up near the midpoint of the third period with some beautiful movement by their powerplay. 2016 first-round pick Sam Steel made a sweet dish to 2014 first-round pick Nick Ritchie to make it 2-2 with the man advantage.

The Blackhawks came away with the extra point in overtime thanks to Toews and Kane, but it was a much better team effort that led to the victory. The defense held strong in the closing minutes of the third period to secure at least one point, and Robin Lehner did his thing in goal to seal the win. Hopefully, the Blackhawks will take some momentum from Sunday night’s contest into San Jose on Tuesday.

The Blackhawks will finish off their four-game road trip on Tuesday night in San Jose. The Sharks are currently in last place in the Western Conference with a 4-10-1 record in their first 15 games. They’ll come into Tuesday’s game riding a five-game losing streak. Another big two points on the line for a couple of struggling teams. The game is slated for 9:00 p.m. and is scheduled to be on NBCSN and NBCSCH.