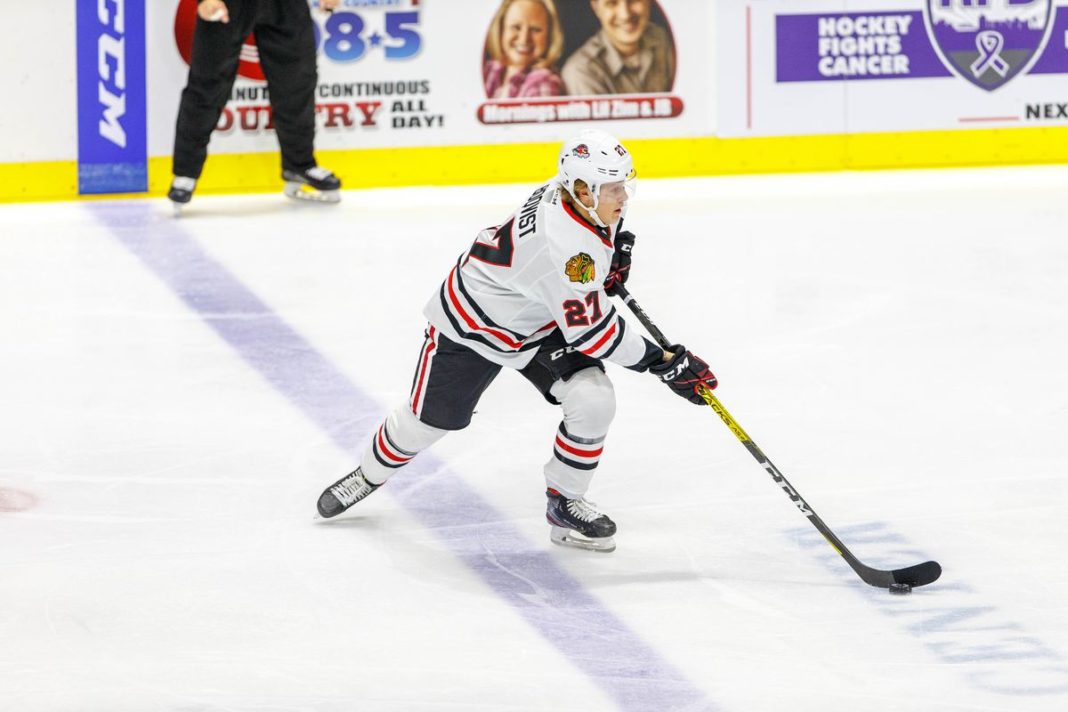 Despite a late game-tying goal from Jonathan Toews, the Blackhawks lost in overtime Saturday night vs. Los Angeles.

After an abysmal 3-0 loss to the Nashville Predators on Tuesday, the Chicago Blackhawks had three consecutive days off to reflect upon the humiliating defeat. The Blackhawks defense was horrendous against Nashville as they allowed the Predators to put a ludicrous 51 shots on goal. With a 3-6-2 record through 11 contests and a stretch of road games on the schedule, the hope was that the Blackhawks would have a strong sense of urgency in Saturday night’s matchup against the Kings.

That didn’t exactly seem to be the case, as the Kings jumped out to a 2-0 lead just four and a half minutes into the game. Kyle Clifford struck first for Los Angeles after David Kampf had a horrid sequence in the defensive zone to allow the opportunity.

Defenseman Matt Roy doubled the Kings lead shortly after by winning a puck battle near the Blackhawks blue line and rifling a shot past Crawford’s blocker.

Just before Roy’s goal, a Kings shot came up high and hit Blackhawks goaltender Corey Crawford in the mask. Crawford appeared to be alright after making the save, but the NHL’s concussion spotters took the safe route and decided to pull Crawford from the game to get checked for a concussion. The two-time Stanley Cup Champion has had two severe concussions in recent years that kept him out for a significant amount of time.

Robin Lehner came in and made five saves for the Blackhawks before Crawford was cleared and approved to return to the game. It was a wild and wacky first couple of minutes to say the least.

Once Crawford returned in net, the ice began to tilt in the Blackhawks’ favor. After failing to record a shot on goal in the first eight minutes, the Blackhawks got a powerplay and FINALLY cashed in for the first time in six games. Coach Jeremy Colliton went with a different look to begin the man advantage, as Jonathan Toews centered a unit along with four rookies. Alex Nylander, Kirby Dach, Dominik Kubalik, and Adam Boqvist joined the ‘Hawks captain on the powerplay and found the back of the net to snap an 0-for-21 streak. Dach made a nice power move in front of the net and Kubalik jumped on a loose puck to cut the Kings lead in half.

Kubalik got his revenge against the team that traded him away for a measly fifth-round pick. The 24-year-old forward wasn’t done yet though, as later on in the period he forced Kings’ goaltender Jack Campbell into making a horrible turnover. Campbell blindly played the puck in front of his net, which gave David Kampf a yawning cage for his second goal of the season.

The Blackhawks got off to a rough start in the opening frame, but they got better as the period went on. Unfortunately, the ‘Hawks couldn’t create much offensively over the next 40 minutes. From the start of the second period until the end of regulation, the Blackhawks registered just 12 shots on goal. The Kings, on the other hand, had 45 shots on net at the end of the third period.

Corey Crawford struggled before being evaluated for a concussion, but he kept the Blackhawks in the game once he returned. The Kings finally snuck one through Crawford in the third, as Andrew Shaw turned the puck over, then failed to get back on defense. Dustin Brown torched Shaw in transition to create a 2-on-1, and then the veteran forward found an open Mike Amadio to make it 3-2 Kings.

With the Blackhawks doing just about nothing offensively in the third period, a comeback seemed wishful in the moment. The ‘Hawks would surprise everyone though, as Patrick Kane set up Jonathan Toews for his second goal of the season with Crawford pulled for the extra attacker. Not only did the goal tie the game, but it snapped a six-game pointless streak for the Blackhawks captain.

The Blackhawks somehow forced overtime, even though they were outshot 45-24 in regulation. There was a lot of back and forth action during the 3-on-3 period, but the Kings took advantage of an odd-man rush to win the game 4-3. Crawford made the initial stop on Toffoli, but the puck squeaked through his legs and Doughty was there to tap it into an open net. Adam Boqvist was guilty of making the turnover that led to the 2-on-1.

The Blackhawks are right back in action Sunday night in California. They take on a 9-6-0 Ducks team that has gotten off to a surprising start. The game is slated for 7:00 p.m. CST and is scheduled to be on ESPN+, FS-W, and NBCSCH.