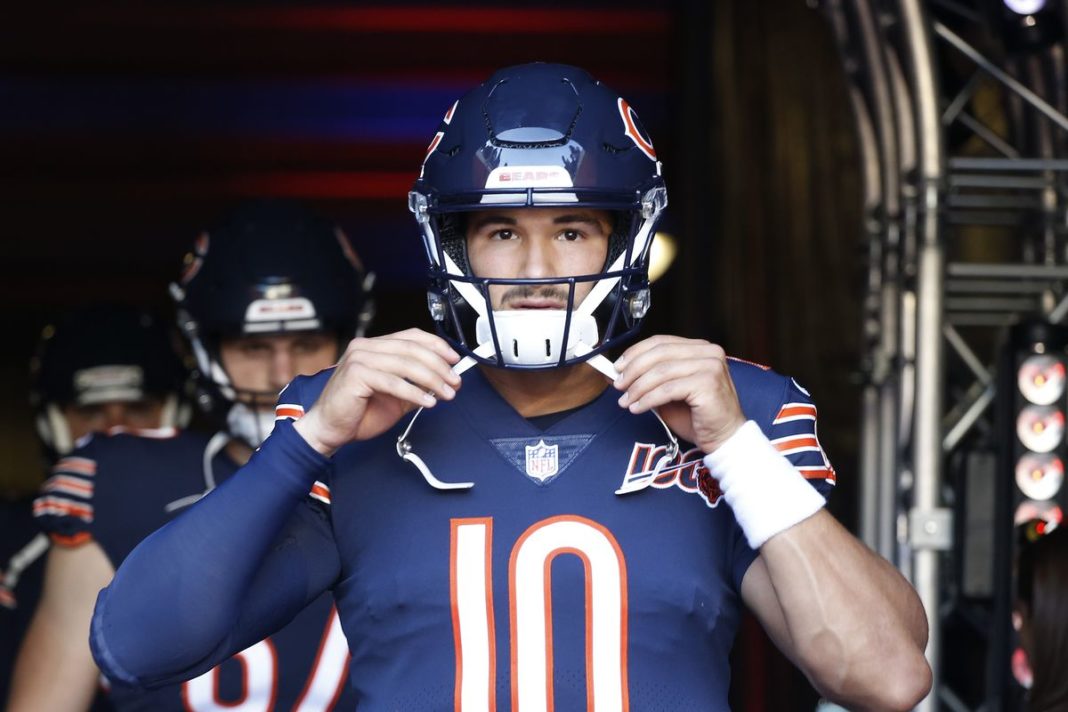 Frustration is sky high with the Chicago Bears offense. It’s not hard to understand why. When you rank 30th in total yards and 28th in scoring, those are strong grounds for criticism. Everybody not named Allen Robinson is getting their turn at coming under the microscope. Yet none can touch the level of starting quarterback Mitch Trubisky. In just over three games this season, the 25-year old has 588 yards passing with three touchdowns and two interceptions. Good for an 81.0 passer rating.

Meanwhile, fans have had to continue watchings Patrick Mahomes and Deshaun Watson light up scoreboards every week. It’s like their worst nightmare has come true. They feared the Bears would screw up picking the right quarterback in 2017 and that indeed appears to be what happened. This is undoubtedly why many are calling for his head. The team needs to admit its mistake, move on and try again. They can’t waste another great defense on mediocre quarterback play.

Under normal circumstances, this wouldn’t be a totally huge issue. Teams have rapidly moved on from former high draft choices before. Unfortunately, the Bears’ circumstances are not normal. Brad Biggs of the Chicago Tribune said it best during his weekly mailbag.

“The problem with looking for a new quarterback after this season is twofold. For starters, the Bears are short on draft capital because of the Khalil Mack trade and other deals. You also have to consider that they won’t have the salary-cap flexibility they’ve enjoyed in previous years. Trubisky’s performance and development should be monitored closely, but based on what we have seen to this point, I have a hard time seeing the Bears moving in a different direction at the end of this season.”

Chicago Bears must bite the bullet and wait it out

Right now the Bears have seven picks in the 2020 draft. On the surface, that may sound fine. Every team has seven to start. However, this is not a normal case. Chicago doesn’t have 1st, 3rd, or 4th round picks due to the Khalil Mack, Anthony Miller, and David Montgomery trades. They have two 2nd round picks, one which they got back in the Mack deal. Then they won’t pick again until the 5th round. This is not the most ideal situation for a team to go hunting for their next quarterback.

Even if they wanted to use one of those 2nd rounders at the position, the odds of success would not be in their favor. Since the NFL merger in 1970, just 10 out of 51 total quarterbacks taken in that area of the draft went on to at least one Pro Bowl in their careers. This is a list that includes the likes of Kordell Stewart, Jake Plummer, and Neil Lomax. As for the 5th round and later? That doesn’t even need addressing. It’s basically playing the lottery.

The best course of action for the Bears would be to use those picks to continue to bolster their roster. A number of veterans could end up leaving next offseason and fresh blood will be needed. Tight end? Offensive line? One could easily argue those positions need greater attention at the moment.

So what about free agency you may ask?

This option doesn’t look much better. Not only because good quarterbacks rarely become available in free agency, but also because they’re going to be expensive. Right now the Bears are not in a position to do some reckless spending. Current projections have them over the salary cap in 2020 by around $3-4 million. That should ease if they roll over their current cap space to next year. Even then though they’d have problems.

Danny Trevathan? Ha Ha Clinton-Dix? Roy Robertson-Harris? All will be free agents in some capacity next offseason. Then there’s the looming contract extension needed for star safety Eddie Jackson. This means if the Bears wanted to go after a quarterback on the open market, they’d need to create a lot more space. That means some probable roster cuts. Kyle Long and Prince Amukamara would likely be the first to go, bringing in $16.1 million. Then Cordarrelle Patterson ($5.25 million), Taylor Gabriel ($4.5 million), and Mike Davis ($3 million) would have to go too.

That should make enough room to have a shot at signing somebody.

So who might it be? This is difficult to know for sure since it’s not yet clear who actually will or won’t be available. There are older veterans like Eli Manning and Philip Rivers. Manning was just benched in favor of rookie Daniel Jones. Rivers is still playing well but the odds of Los Angeles actually letting him walk seems unlikely.

Some of the younger notable options will include Jameis Winston and Marcus Mariota. Both of whom haven’t exactly had the most consistent careers to this point. Dak Prescott’s contract is expiring but nobody believes the Dallas Cowboys will actually let him reach the market. After that, it starts to get a little more complicated.

Carolina Panthers backup Kyle Allen has played well in relief of Cam Newton so far this year. He’ll be an exclusive rights free agent, which means Carolina can exercise it and keep him in place for another year at what would be cheap price of less than $600,000.

Then there is Teddy Bridgewater.

The former 1st round pick has risen from the grave after that devastating knee injury in 2016. Backing up Drew Brees in New Orleans, he has stepped in and played brilliantly. He’s completed 70% of his passes for 849 yards, six touchdowns, and two interceptions. Technically he is under contract for one year, but the Saints have two additional voidable years at the end of the deal. So technically it can go for three years. This means the team would have to consent to let him hit the market.

At that point, Bridgewater will be 28-years old and in his prime. Given the impression he’s making lately, it’s almost certain he’ll garner a ton of interest around the league, which means his price would be high for the Bears. So they’d be left with a decision. Pay him upwards of $27-28 million a year or ride it out with Trubisky and his $9.2 million hit for one more year? It’s not an easy decision.

Last but not least? The Bears may not think he’s a lost cause.

Believe it or not, there is a substantial possibility that the organization isn’t in the same mindset as a lot of fans. They might still believe Trubisky is their guy. Sure the stats aren’t great but not too long ago this guy was an alternate in the Pro Bowl and throwing for over 300 yards in a playoff game. He’s shown he can be capable of good play in the NFL. Is cutting ties when things don’t start well the best course of action? This is what the organization has to consider.

Trubisky hasn’t stopped showing those glimpses of standout play. His game in Washington marked the fourth time in 18 games he threw for three touchdowns or more. That’s an average of 22.22%. By contrast, Jay Cutler managed that same feat 16 times in 102 games, an average of 15.68%.

One would call that encouraging if nothing else.

Trubisky is still talented and sometimes a quarterback takes a bit longer to figure things out than others. On top of that, the Bears don’t need him to be an elite passer. They have an elite defense. All he has to do is not turn the ball over and be able to score 20-24 points per game. That should be enough to win most of their games against any opponent. Is he capable of that?

Absolutely. It’s a matter of getting him healthy and cleaning up the mess around him with the penalties and dropped passes. This is the course of action that is most palatable for the Bears. Settle him down and keep working with him to improve. See if he can finish the year strong and then focus on other areas of need with limited resources in 2020. Then if by the end of next year he’s still not getting it, then they’ll have a 1st round pick in 2021 to take another swing.