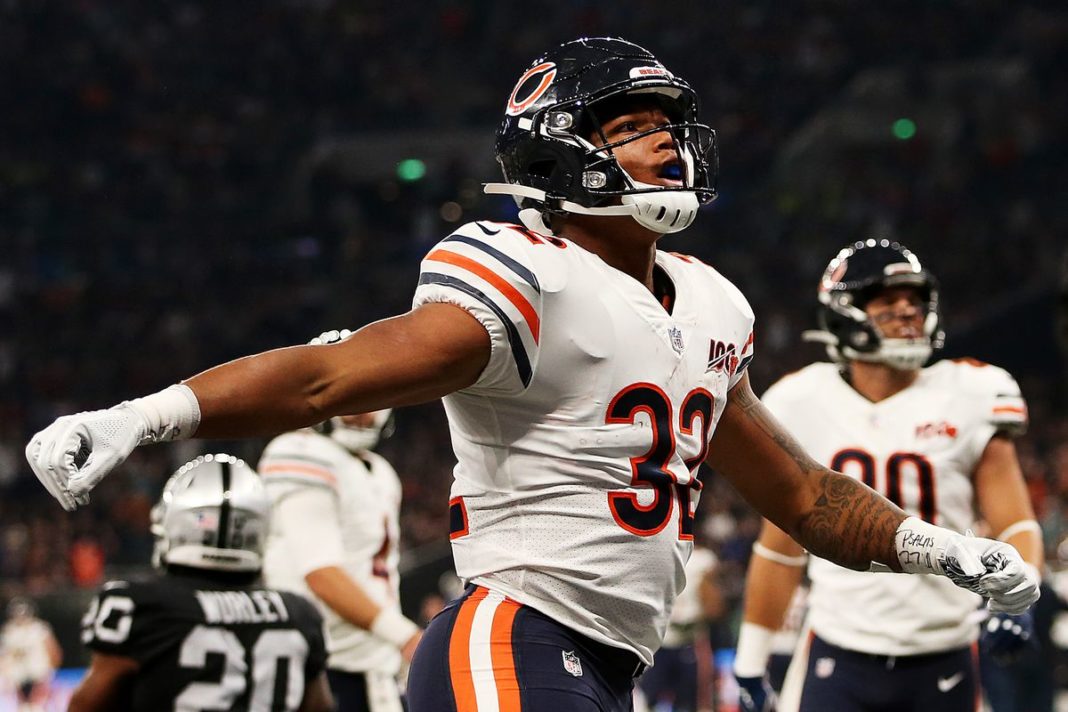 David Montgomery hasn’t gotten off to the start that he probably hoped this season. Then again nobody on the offensive side for the Chicago Bears has. Through five games, the rookie 3rd round pick is averaging just 3.3 yards per carry. Far behind the 5.2 that Jordan Howard averaged as a rookie in 2016. Then again Howard had the benefit of good blocking that year. The Bears offensive line has been inadequate to put it lightly through five games and Montgomery is one of those suffering most from it.

However, this does not mean the kid is useless. He has 297 yards from scrimmage and two touchdowns. That puts him on pace for 950 yards total with six touchdowns. That’s not a bad year for a rookie. The problem is it’s not enough. The Bears need more, fair or not. To his credit, Montgomery is doing everything he can. Of his 225 yards rushing, 84 have come after first contact, proving that he’s difficult to bring down. He’s broken seven tackles this season.

While the numbers aren’t there yet, some see the signs of a good football player. A really good one. Among those who have the highest expectations for him is Jarrett Payton, former NFL running back and son to iconic Bears legend Walter Payton. In an interview with Tyler Dunne of Bleacher Report, he talked about what he loves so much about Montgomery and believes he has the same qualities that made his father so special.

David Montgomery has the same will that Payton did

Ray Lewis once had a great quote. He said once you combine wisdom with will on top of talent, you get what you call “Sweetness.” Payton sees those same traits in the young Bears rookie. The unwillingness to go down easy, the quick feet, and the indomitable will to get up and get after it again on the next play.

He’s no burner, as a 4.63 time in the 40 at the combine revealed, but nothing about Payton seemed elite, either. Not at first glance. Instead, there was a raw toughness to Payton, his son says. The same thing he sees now in Montgomery. Like his father, Montgomery will fight. And fight. And force two, three, four guys to bring him down.

“His toughness on the football field just screams what my dad was all about,” Jarrett Payton says. “He does not shy away from anything.”…

…In Montgomery, Jarrett sees something different too: rapid, choppy feet.

“That’s the special part of his game: His feet are so good,” Payton says. “That’s why he can take that contact, that first contact, and eat it up like it’s some cereal and keep going for more yards. Love it.”

People who are getting on David Montgomery about his stats should also know their history. Walter Payton was not an instant success in the NFL. As a rookie in 1975, he mustered just 679 yards rushing. An average of 3.5 per carry. He was a 4th overall pick. So maybe it’s best to not overreact to this start Montgomery’s having. Let the Bears try to get their blocking figured out and see what he does with actual lanes to run through.

He likely won’t reach the same heights Payton did, but the talent is there for him to be a legitimate difference-maker for this team.