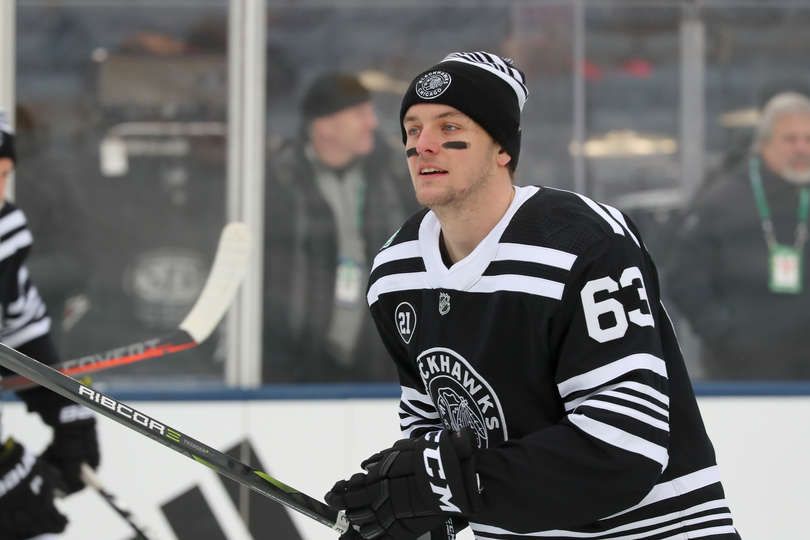 The 24-year-old Swedish defenseman was one of two players claimed off waivers on Tuesday.

The Chicago Blackhawks made several moves on Monday afternoon to finalize their 23-man roster for Friday’s game vs. Philadelphia. Dennis Gilbert and Anton Wedin were assigned to the Rockford IceHogs, while Carl Dahlstrom was put on waivers for reassignment. Dahlstrom seemed likely to clear waivers, but the Jets surprised everyone on Tuesday by putting in a claim for Dahlstrom.

Dahlstrom, a 6-foot-4, 212-pound blue-liner, played in 39 games for the Blackhawks last season. He and Connor Murphy performed well in a shutdown role for a significant stretch of games around Christmas time before Dahlstrom began struggling mightily.

With Slater Koekkoek winning the seventh defenseman spot and the emergence of Dennis Gilbert, Dahlstrom became expendable in a crowded blue line. The Stockholm, Sweden native is still relatively young, but there were noticeable flaws in his game this preseason. Even against sub-par competition Dahlstrom looked lost in the defensive zone at times. The Jets are currently in desperation for defensemen after losing Tyler Myers, Jacob Trouba, Ben Chiarot, and potentially Dustin Byfuglien, so the move makes sense from their part.

As for the Blackhawks, this move doesn’t hurt them all that much depth-wise. They still have Dennis Gilbert, Adam Boqvist, Nicolas Beaudin, and Chad Krys in Rockford this season. Not to mention top-prospect Ian Mitchell could very likely be in his final season of collegiate hockey at Denver. So the Blackhawks will be fine after losing Dahlstrom, but it’s tough to see the happy-go-lucky defenseman go nonetheless. Here’s to all the best, Carl!