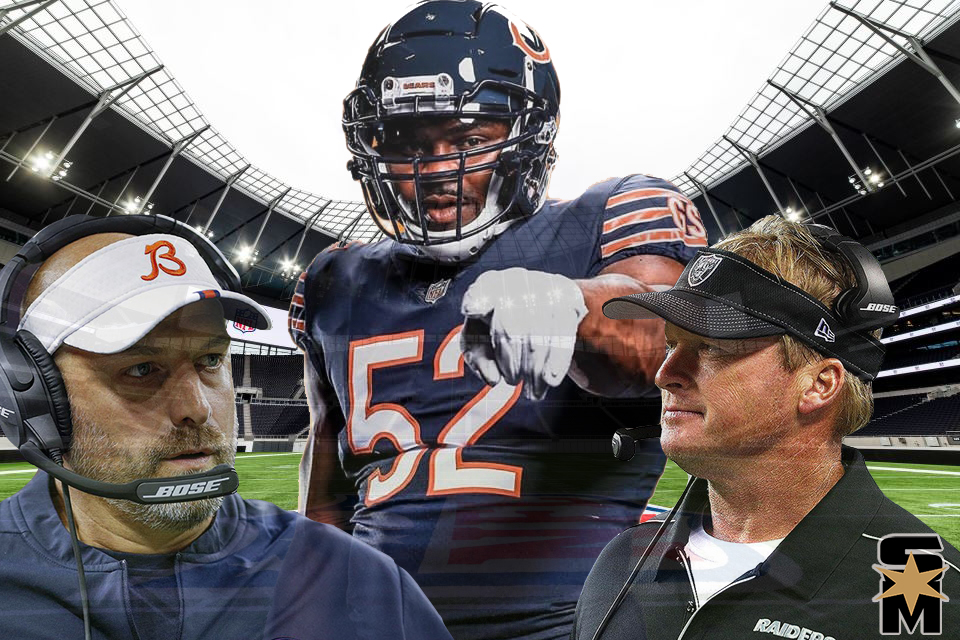 It wasn’t pretty for the Oakland Raiders. When All-Pro linebacker Khalil Mack sat out 2018 training camp in a contract dispute, first-year head coach Jon Gruden had only two options: pay the man or trade him. For Bears fans, the rest is history as the Monster of the Midway sent a healthy trade haul to the Raiders in return for Mack, who has been the heart and soul of arguably the best defense in the NFL. Mack faces off against his former team this weekend in London for the first time since the deal.

As he prepares for his first matchup against the team that drafted him with the fifth overall pick in 2014, Mack is licking his chops. Mack told Deion Sanders on NFL Network that facing the #Raiders this week “is a game I’ve been looking forward to. I can’t lie. It’s going to be a big one for me.”

Khalil Mack told Deion Sanders on NFL Network that facing the #Raiders this week "is a game I've been looking forward to. I can't lie. It's going to be a big one for me."

In the end, both teams seem happy with the move, even if many Raiders fans still have “Mack Envy.” As two franchises at different points in their quest for a Super Bowl, the deal filled plenty of needs for both.

“It’s hard to replace a guy like that,” Gruden said. “It’s sensitive. I’m still sensitive about it…I do know this: my brother [Washington Redskins head coach Jay Gruden] didn’t get anything for Kirk Cousins except a compensatory pick. At least we got some picks. We got a chance to do something with them.”

While Gruden and his defense misses Mack, Bears head coach Matt Nagy seems to be content with his freakshow linebacker playing at a ridiculously high level.

“He’s on another level right now,” Nagy told the team website via Larry Mayer. “He affects every single play. It doesn’t matter if he makes the play or not, he affects it. Every game I’ve watched this year already so far, he dominates. Whether it’s getting a holding call or going after the football, there are turnovers that are occurring. He’s allowing other guys to play well, too.”

While Josh Jacobs (62 attempts, 307 yards, 2 TDs) has been a solid rookie running back and the move freed up cap space to build a more rounded roster, the Raiders’ defense has felt the loss. Now, with defensive captain Vontaze Burfict suspended for the remainder of the season, it will be doubly as difficult to watch Mack operate on the other side of the ball.

I’m still trying to figure out how the Raiders couldn’t pay Khalil Mack (who is a great team player and was on their team) but they could pony up $30 million to bring in Antonio Brown???? https://t.co/qPXisrTdNb

Raiders quarterback Derek Carr has been sacked just eight times this season while the Bears sacked Minnesota quarterback Kirk Cousins six times alone on Sunday. All told, Mack has 4.5 sacks and four forced fumbles this season for the stout Chicago defense. The Raiders defense, as a whole, has collected just five sacks on the season.

“It’s not what anybody wanted,” Carr said about the trade. “I think that’s clear. But it is what it is. It’s probably the business…it’s one of those sucky things that happen. The hardest part for me, obviously, you lose a good football player, but he’s my brother, man. That’s one of my best friends, so I think the hardest part is I don’t get to see one of my best friends every day.”

Needless to say, when Mack lines up against the Raiders on Sunday, there will be a mixed bag of emotion. For Mack, playing the Raiders in London may be much safer than at The Black Hole in Oakland, but it won’t be without plenty of emotion. The Bears opened as 5.5-point favorites, despite most likely running an offense through backup quarterback Chase Daniel.

The game is set for a noon kickoff (10 a.m. PST) at London’s Tottenham Hotspur Stadium and will be telecast on Fox.