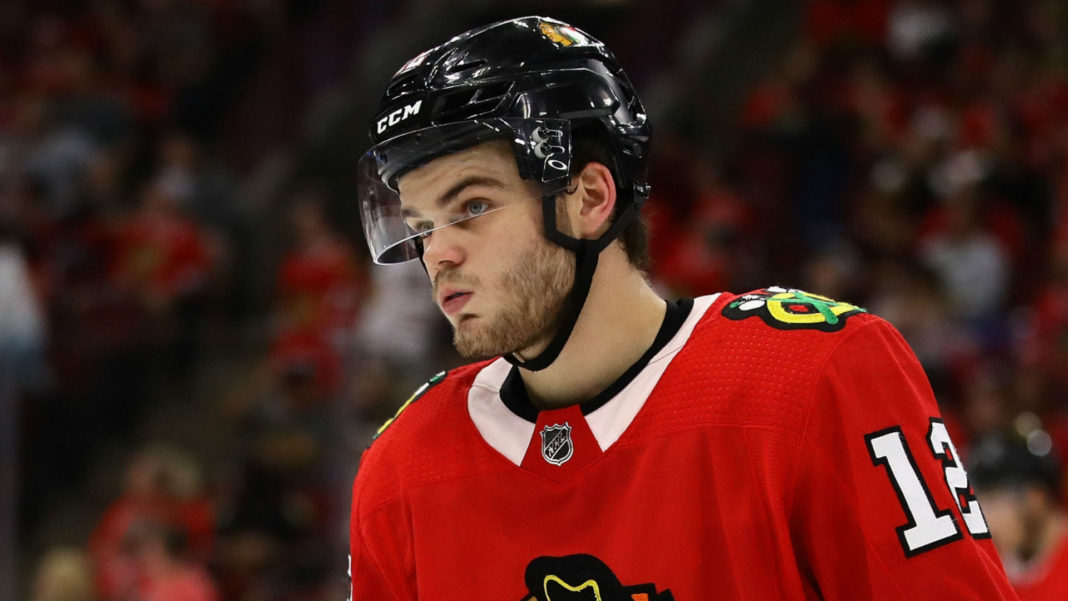 The Chicago Blackhawks and Alex DeBrincat came to terms on a three-year, $19.2 million contract extension on Thursday morning.

The Blackhawks got ahead of the curve by extending 21-year-old winger Alex DeBrincat’s contract on Thursday. The new deal will kick in next summer and carries a generous $6.4 million cap hit.

“From the start, I always wanted to get it done early…when they came to offer us a contract, it was a pretty easy decision for me to get it done now and just focus on the season.” DeBrincat said.

It seemed like the contract negotiations we’re relatively easy for both sides.

“We’ve been talking back and forth for a little bit,” Blackhawks General Manager Stan Bowman stated. “At the end, it came together pretty quickly.”

DeBrincat is coming off a terrific season in which he tallied 41 goals and 35 assists for a total of 76 points. His 41 goals were tied for sixth in the league with superstars Connor McDavid, Nathan MacKinnon, and Nikita Kucherov. ‘The Cat’ has now recorded 69 goals in his first two NHL seasons, while also playing in all 164 games.

DeBrincat has one year left on his entry-level contract with a meager $778,333 cap hit. It’s worth noting that DeBrincat’s contract will expire the same summer that Patrick Kane, Jonathan Toews, and Duncan Keith’s do. The NHL will receive a new television deal in the United States that summer, which should drive the salary cap up. That likely played a factor in DeBrincat’s decision to sign a bridge deal instead of a long-term deal.

The new contract for the young sniper is most comparable to the recent deals for Brock Boeser, Matthew Tkachuk, and Timo Meier.

Looking at Boeser’s career numbers, the Canucks’ 2015 first-round pick has 117 points (59G, 58A) in 141 career games, good for 0.82 points-per-game. DeBrincat has 128 points (69G, 59A) in 164 games, with an average of 0.78 points-per-game. So DeBrincat has Boeser beat in the goals department, but Boeser has been the better point-producer by a slim margin. Boeser will carry a $5.875M cap hit over the next three seasons, so DeBrincat’s elite goal-scoring ability may have led to a bit of a pay raise.

Matthew Tkachuk, the sixth overall pick in the 2016 NHL Draft, recently signed a three-year, $21 million contract extension with the Calgary Flames. Unlike DeBrincat and Boeser, Tkachuk has already played three full seasons in the NHL. The oldest son of former St. Louis Blues legend, Keith Tkachuk, is coming off a breakout year, in which he tallied 34 goals and 43 assists in 80 games. For his career, Tkachuk has 174 points (71G, 103A) in 224 games, which averages out to 0.77 points-per-game. It appears that the Blackhawks got the better deal by saving $600,000 for just about the same production.

22-year-old Swiss forward Timo Meier signed a four-year, $24 million contract extension with the San Jose Sharks this offseason. Meier also had a breakout season last year with 30 goals and 36 assists in 78 games. Through 194 career games, the Sharks first-round pick in 2015 has recorded 108 points (54G, 54A). That comes out to just 0.55 points-per-game, which is significantly lower than the other three players. Based on Timo Meier’s contract extension, the Blackhawks stole Alex DeBrincat for $6.4 million per year.

Alex DeBrincat and the Chicago Blackhawks will open their season on Friday afternoon against the Philadelphia Flyers. DeBrincat is expected to be slated on the second line with Dylan Strome and Andrew Shaw.