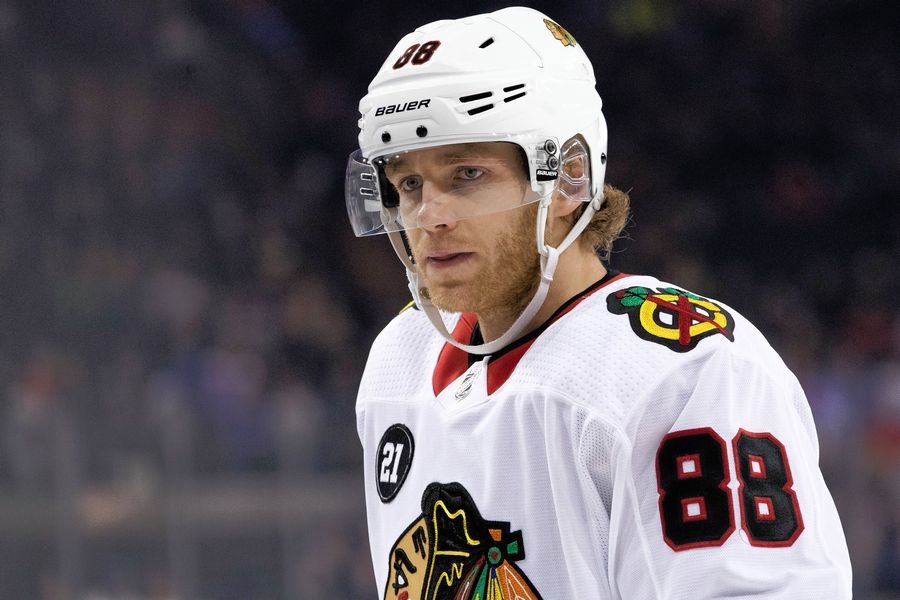 Dreadful turnovers and untimely mental mistakes cost the Blackhawks their first game of the season in Prague.

After an exciting offseason in which the Chicago Blackhawks made significant changes to their roster, there was a lot of enthusiasm surrounding the 2019-20 campaign. The additions of Robin Lehner, Calvin de Haan, and Olli Maatta were made to sure-up the lackluster defense from the season prior. Andrew Shaw, Ryan Carpenter, Zack Smith, Alex Nylander, and Dominik Kubalik were brought in to add much-needed forward depth. Blackhawks General Manager Stan Bowman addressed most of the team’s weaknesses from last season.

The 2019-20 season started the same way last season ended though, with defensive-zone turnovers and mental mistakes costing the Blackhawks yet again.

Dennis Gilbert was the first culprit, as early on in the first period he had a putrid turnover that led to Travis Konecny’s first goal of the game.

Duncan Keith struggled all game long, and in the second period, he had a rough sequence that gave Konecny another goal. The two-time Norris Trophy winner turned the puck over in the offensive zone, and then provided little support for his netminder in transition (to put it nicely).

Then in the third period, Keith had yet another turnover on Michael Raffl’s game-winning goal. The goal was ultimately Crawford’s fault though, as he wasn’t ready at all for Raffl’s wraparound bid. Crawford came up big countless times throughout Friday’s game, but he allowed a couple of goals that he would certainly like back.

It was tough to watch the Blackhawks have the same problems as they did last season. Although, it is just one game, and the defense will surely get better once Connor Murphy and Calvin de Haan return from injury.

Alex Nylander came out strong in the first period, as he scored a goal on his first shot as a member of the Blackhawks.

Nylander looked comfortable on the top line with Jonathan Toews and Patrick Kane in the early going. It was relieving to see the 2016 first-round pick have success in his first game with the ‘Hawks.

Patrick Kane picked up right where he left off last season, as he tallied one goal and two assists in Friday’s game. Like a fine wine, Kane appears to only get better with age. He played a key role in all three Blackhawks goals.

The Blackhawks powerplay was among the leagues best in the second half of last season, and they continued to produce in the season opener. Late in the second period, Patrick Kane found an open Alex DeBrincat, and ‘The Cat’ wired one past the glove of Carter Hart.

The Blackhawks also scored a goal late in the game with Crawford pulled. Two of their three goals scored on Friday came with a man advantage.

After a pretty evenly-matched first period, the Blackhawks were significantly outplayed in the second. The ‘Hawks were outshot 16-7 and allowed 20 scoring chances, according to Natural Stat Trick. Just like last season, the Blackhawks struggled to play a complete, 60-minute game. If they want to be a playoff team this year, then they are going to have to work on their consistency.

Last season the Blackhawks were among the league’s worst in shots on goal allowed per game. One of the main focuses of this offseason was making it easier on their goaltender. Well, that didn’t exactly go as planned in the season opener. The Blackhawks allowed 38 shots on goal, which is entirely too many against a middle-of-the-pack team like the Flyers. That has to change if the ‘Hawks want to have success this season.

The Blackhawks will head back to Chicago, where they will have seven consecutive games in the United Center. Unfortunately, the next game isn’t for six days, as the Blackhawks host the San Jose Sharks for their home opener on Oct. 10.