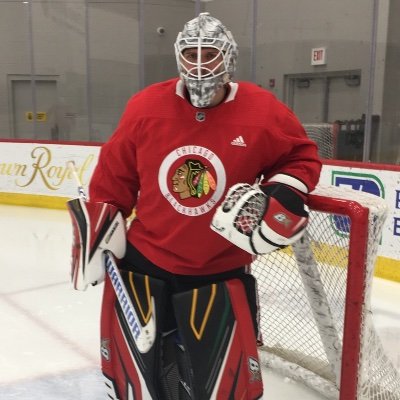 The new Blackhawks netminder has stopped 54 of 58 shots this preseason.

The Chicago Blackhawks have dealt with an excessive amount of injury scares in the past couple of weeks. In the seventh-place game during the NHL Prospect Tournament, the Blackhawks had FOUR players go down. Adam Boqvist, Philipp Kurashev, and Mikael Hakkarainen all suffered minor injuries, but 2019 3rd overall pick Kirby Dach remains out of the lineup with a concussion. Dach has been skating on his own before practice since Friday, but he has not been cleared for contact.

During practice on Tuesday afternoon, the Blackhawks suffered ANOTHER injury scare. Free-agent acquisition Robin Lehner was forced to leave practice with an undisclosed injury. The 28-year-old goaltender was a finalist for the Vezina Trophy last season for the New York Islanders.

“I don’t think it’s a serious thing but obviously serious enough that he had to leave.” Coach Jeremy Colliton said when asked about Lehner.

The timing couldn’t have been any worse, as the Blackhawks leave for Europe in just two days. Although the injury doesn’t sound serious, this could change the plans for the goaltender situation in the upcoming preseason games. The Blackhawks play the Washington Capitals at home on Wednesday, then the NHL roster will fly to Berlin. Jeremy Colliton might have to bring another goaltender on the trip due to Lehner’s recent injury. Lehner’s status will be something to keep an eye out for in the next couple of days.