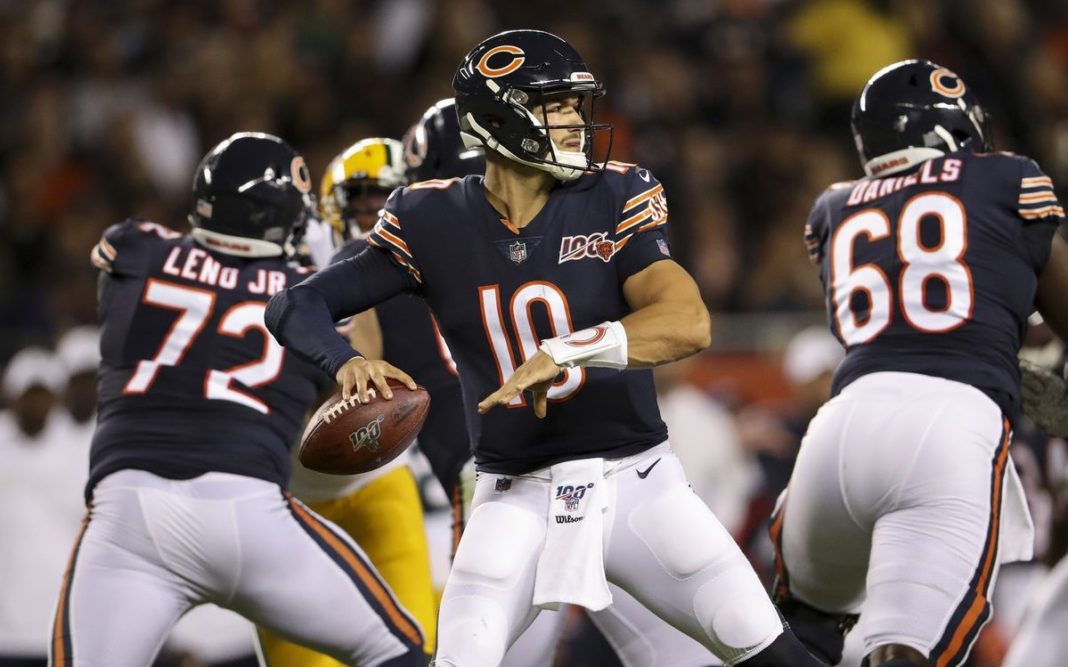 Mitch Trubisky disappointed a lot of people on Thursday night in the opener. Hopes were so high that the third-year quarterback was ready to take that next step. Ready to become the franchise passer the Chicago Bears have craved for decades. Then he delivers arguably one of his worst games with the team. He finished with just 228 yards and an interception and probably should’ve been intercepted two more times as well.

Inevitably this led to a lot of fans turning against him. After an entire offseason of hype and expectations, that was what they got? More visions of a QB being entirely unequal to the task of playing good football on primetime against a good opponent. Already people have begun looking towards 2020. Wondering if there might be a possible replacement the team can consider. Patience with Trubisky is wearing out fast.

This does beg the question though. What can the Bears do about it? Trubisky has played some outstanding games in his career. His problems aren’t a lack of talent. It’s a lack of consistency. He’ll have a great game one week and then disappear the next. Is there any explanation as to why this is the case? That is what we’ll explore here.

There are plenty of theories about why Trubisky is so erratic as a passer. A big one that came out of the loss to Green Bay last week was lack of commitment to the ground attack. The Bears ran the ball just 15 times total in the game. A wholly inadequate number. If this theory is true, it must mean Trubisky’s best and worst performances are tied to whether or not the Bears run consistently in a game.

That’s strange, isn’t it? Trubisky’s worse string of games actually featured more carries by the running backs compared to those where he was at his best. So if it’s not that, what else could it be? The next possible culprit is pressure. Maybe Trubisky’s worst performances can be directly tied to how many times the defense gets in his face. This is a natural possibility. No QB likes being under duress constantly, right?

Wow. That doesn’t add up either. The differences in pressure and sacks between the two are negligible. So what gives? If running the ball consistently doesn’t affect Trubisky and neither does more or less pressure, then is there anything that offers an idea? It turns out there is. After some digging, it became clear that one stat did fall in line with Trubisky’s best and worst performances over the course of 2018.

That was completion percentage.

For those who haven’t caught on yet? His completion percentage against Green Bay in the opener was 57.78%. This paints a pretty clear picture of who Trubisky is, at least at this point in his career. He is a quarterback who’s performances are directly tied to rhythm. When he’s able to string completions together, he clearly gains confidence in his execution. Thus the passes get out on time and are typically more consistent with accuracy.

By contrast, when opponents are able to disrupt his passing lanes and prevent completions, his entire game suffers. He’ll start getting sloppy in his mechanics, making bad decisions that often lead to interceptions. Much of this can be attributed to the game plans he’s trying to run. While Matt Nagy can be a tremendous play caller at times, he does have a bad tendency to hamper Trubisky’s rhythm with some of his calls.

Namely going for slow-developing plays down the field early rather than a quicker, high-percentage attack that can settle his quarterback down. Being aggressive is never a bad thing, but with someone like Trubisky, there’s a time and place for it. A perfect example is the opening drive against Detroit last season. Trubisky threw five passes, all were within 10 yards of the line of scrimmage and all were completions. On the next series? He attempted four deep passes of at least 20 yards.

Three were completed including the touchdown to Allen Robinson.

That sequence can be directly attributed to the first drive that helped get Trubisky in rhythm with quick, easy completions. This is something the Bears have to keep in mind as they forge ahead from their disaster against Green Bay. Protecting him and running the ball are important. As is the case with any offense. However, they are just a means to an end. That being the goal of getting Trubisky as many easy completions as possible.