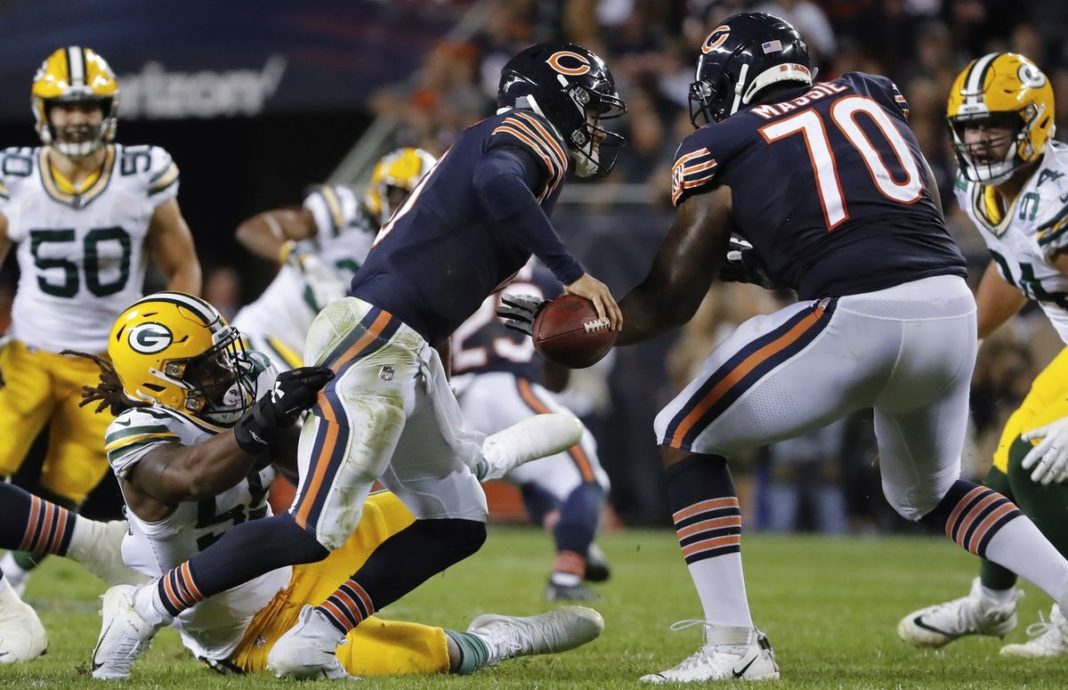 Harry Hiestand is a disciplined and meticulous offensive line coach. There is a reason he’s considered one of the best in football, college or the pros. He can’t have liked what he saw opening night against the Green Bay Packers. Not only did his unit fail to consistently open holes on the ground. They were also shockingly inept in pass protection. Something that was almost never the case in 2018. It led to questions about what in the world was wrong.

In total, Mitch Trubisky was sacked five times on the evening and hit four others. The Packers pressured him 25 times overall. It was a wholly unacceptable performance for a group that features three guys who have been to the Pro Bowl. Two as early as last season. So what gives? Have they somehow regressed as a unit or is it something else. The best man to ask in these situations is Hiestand himself.

He has an idea of what went wrong, and it’s a classic problem players can run into from time to time. They started to get caught up in their own hype. He explained this to Rich Campbell of the Chicago Tribune and others.

“When the expectations are high for all of us as players and coaches, and you’re not having the success you’ve anticipated, I think it doubles down a little bit,” Hiestand said Tuesday. “That was the sense I got, and we just couldn’t work our way out of it.”

Hiestand has been around a long time. He understands the psychology of football like anybody else. The Bears were the underdog throughout 2018. They didn’t have to worry about expectations because there were none. That changed the moment they won the NFC North. Now they’re wearing the crowns and everybody else was gunning for them. Opponents would play them just a little bit tougher this time around. Green Bay proved that.

Clearly the offensive line wasn’t ready for that and it showed. They were whipped physically and completely out of sorts in their communication. By far their worst performance as a unit in a long time. If anything though, they should be thankful to the Packers. The game was a wakeup call in a big way for the unit. Hiestand knew this from the moment it ended and made it clear the line was already moving on to the next game.

It wouldn’t be a surprise if they’re much more efficient and focused in Denver against the Broncos this Sunday.