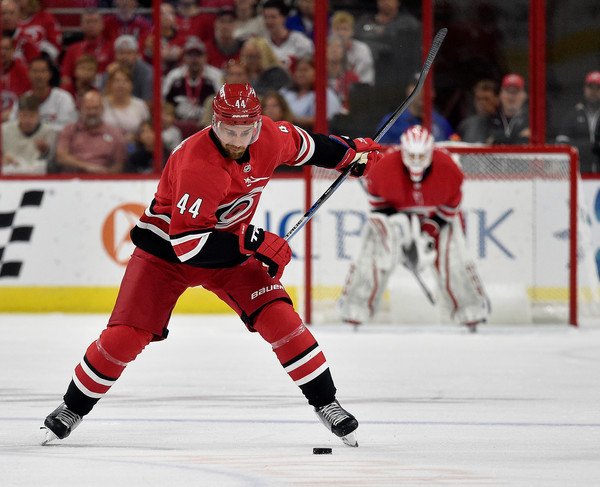 The 28-year-old defenseman has been recovering from offseason shoulder surgery that took place on May 21st.

The Chicago Blackhawks made an abundance of moves this offseason, but none were as significant as the acquisition of Calvin de Haan. Somehow, Blackhawks’ General Manager Stan Bowman was able to turn Gustav Forsling and Anton Forsberg into Calvin de Haan and Aleksi Saarela. Not sure what Carolina was thinking there. Anyways, de Haan has been kept out of Blackhawks’ training camp due to shoulder and groin injuries. On Tuesday afternoon though, team doctors cleared the Canadian defenseman to participate in practices.

De Haan has been on a four-to-six month timeline ever since his surgery back in May. It appears that he’s on track for the four-month route, as earlier this week the Blackhawks announced that de Haan would be out of the lineup for two to three more weeks. That puts him on track to play in the Blackhawks’ season opener on October 4th. De Haan stated in an interview on Tuesday that’s been his goal throughout the recovery process.

“That’s my gameplan, anyways. I’m going to do everything in my power to be ready and hopefully make it a tough decision on the doctors and the staff to not let me play.”

A nagging groin strain seems to be currently bothering de Haan more than his right shoulder.

“A little banged up in the lower body right now. But other than that I’m working through that. Just typical bumps and bruises trying to get back into the swing of things. I feel pretty good. It was fun to be out there with the guys.”

Hopefully, Calvin de Haan will be on the ice on October 4th when the Blackhawks take on the Philadelphia Flyers in Prague, Czech Republic.