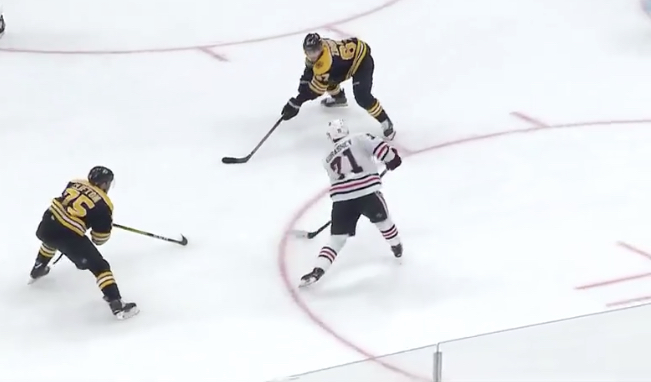 The Chicago Blackhawks took 27 players to Europe on Thursday afternoon for the 2019 NHL Global Series, which meant that the Rockford IceHogs had to fill in for Saturday’s preseason game vs. the Eastern Conference Champion Boston Bruins.

The game would go about as well as expected, with the Bruins dominating puck possession for most of the afternoon. Boston was exceptionally commanding with the man advantage (2/4), as the Pastrnak-Bergeron-Marchand trio created scoring opportunities at will.

Things would get off to a rough start for the Blackhawks, as just 19 seconds in defenseman Philip Holm took a tripping penalty. Boston generated a couple of quality scoring opportunities on the powerplay, but Finnish goaltender Kevin Lankinen came up big to keep the game scoreless.

The Blackhawks defense held their own for the first 10 minutes of the opening period, but the Bruins offense wouldn’t remain quiet for long.

The Bruins would strike again just 22 seconds later, as Kris Versteeg turned the puck over in the offensive zone to give Charlie Coyle a breakaway. Coyle made a nifty backhand-forehand deke to fool Lankinen and stuff one home.

Jake DeBrusk tallied his second goal of the first period with a skillful redirect just a few minutes after to make it 3-0. David Pastrnak also found the back of the net before the conclusion of the period thanks to a blistering one-timer. The Blackhawks would head into the locker room down 4-0, while also being outshot 14-4.

It wasn’t the greatest of starts for the Blackhawks, but they did show some life to start the second period. They could have given up after being down 4-0 through 20 minutes, but that wasn’t about to happen with Derek King behind the bench.

The Blackhawks had a couple of powerplay opportunities early on in the second period, which finally put some pressure on Bruins’ goaltender Tuuka Rask. Kris Versteeg and Nicolas Beaudin both had open looks, but Rask comfortably turned the shots aside.

Midway through the period, David Pastrnak crushed Chad Krys then stole the puck and beat Lankinen top corner to make it 5-0.

Lankinen exited the game near the halfway point for Matt Tompkins, who started for the Indy Fuel of the ECHL last season. The 25-year-old netminder was the Blackhawks seventh-round pick back in 2012.

A little over 11 minutes into the second period the Blackhawks FINALLY got on the board. Joni Tuulola slid the puck up the wall to Brandon Hagel, who found Philipp Kurashev for a two-on-one rush with Kris Versteeg. Kurashev wisely chose to fire the puck on net, and the shot snuck under Rask’s arm to make it 5-1.

Karson Kuhlman would answer right back for the Bruins to make it 6-1 before the end of the second period.

Unfortunately, this was the last preseason game for the Bruins, so they weren’t about to let up with a 6-1 lead.

David Pastrnak scored his hat-trick goal on a breakaway to make it 7-1. It was honestly unfair for the Pastrnak-Bergeron-Marchand line to be on the ice against AHL-caliber players.

Jake DeBrusk would keep the TD Garden rocking, as he found the back of the net for a hat trick as well. Both Pastrnak and DeBrusk had four points on the afternoon.

The Blackhawks would have the last highlight of the game though, as with under a minute remaining Tim Soderlund scored a beautiful short-handed goal on a breakaway. Mikael Hakkarainen made one hell of a backhand pass to find the Swedish forward for his first goal of the preseason.

It may have been an ugly 8-2 loss, but at least the IceHogs never gave up. It’s impressive that they managed to squeeze out two goals against a Stanley Cup contender. There’s a lot of young talent on the roster, and it should be an exciting year of hockey down in Rockford!

The Blackhawks of Saturday afternoon, or the Rockford IceHogs, will report to Rockford to get ready for their season opener on Oct. 4.

The actual Blackhawks will play their final preseason game on Sunday vs. Eisbaren in Berlin. They will continue to practice in Europe for their regular-season opener in Prague on Oct. 4.