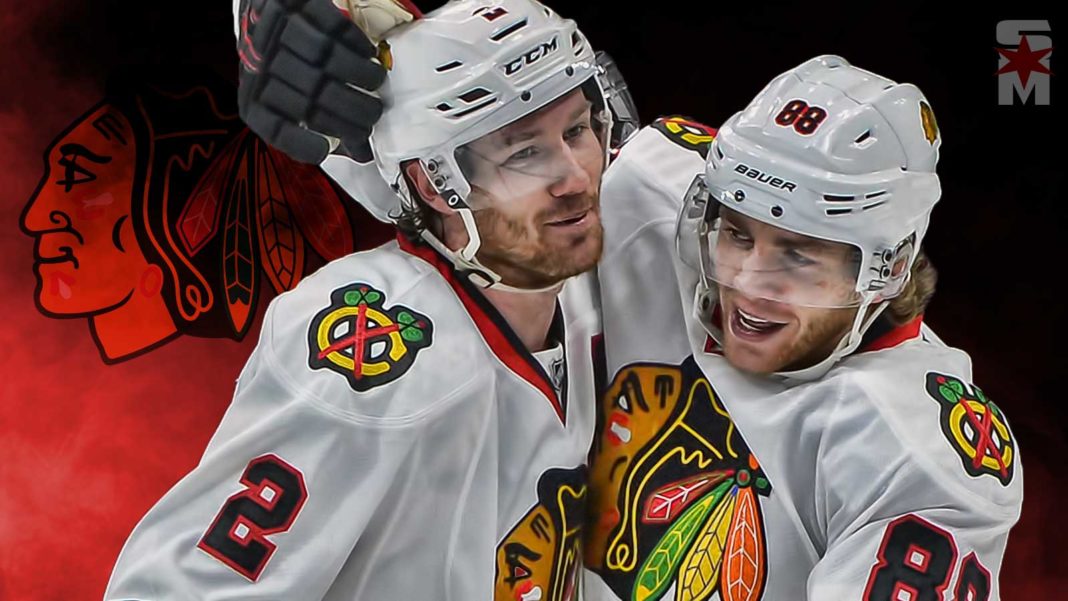 Patrick Kane set up Duncan Keith for the game-winning goal in the Blackhawks preseason home opener.

After dropping the first two games of the preseason in as many days, the Blackhawks finally added a tally to the win column Wednesday night vs. Detroit. Brandon Hagel and Duncan Keith scored the two goals, and Corey Crawford made 23 saves in the victory.

While the Blackhawks had most of their core players in the lineup for Wednesday’s game, the Red Wings brought an AHL-caliber roster to the United Center. Besides Mike Green, Jonathan Ericsson, and Trevor Daley on defense, Detroit had a vastly inexperienced group. Here are the lines the two teams rolled with for the second game of the home-and-home series.

The Blackhawks unquestionably had the superior lineup, but that didn’t reflect in the opening period.

The ‘Hawks had a couple of quality chances early from Toews and Saad, but both players failed to put the puck on goal. Missing the net was a common theme for the Blackhawks in the first.

With just a few minutes remaining in the period, Patrick Kane took a high-sticking penalty to give Detroit a late powerplay. The Blackhawks managed to fend off the Red Wings’ first man advantage of the night, but they were unable to kill the second. Brent Seabrook courageously stepped in front of a Filip Zadina shot, but unfortunately, the puck bounced right to Taro Hirose for an open net. There wasn’t much that Corey Crawford or the penalty kill could have done differently.

The Red Wings would head into the first intermission with a 1-0 lead and a 10-6 advantage in shots on goal.

The Blackhawks came out firing in the second period and looked like a completely different team. Just a few minutes in, Aleksi Saarela demonstrated his hand-eye coordination once again by redirecting a Dennis Gilbert shot past Bernier. The officials quickly waived the goal off though due to a high stick, and video review confirmed. It was a tough break for Saarela, who’s been a fantastic net-front presence so far this preseason.

Fortunately, the Blackhawks would catch a break shortly after. Brandon Hagel scooped up a loose puck after a Jonathan Bernier misplay and cashed in to tie the game at 1. Hagel continues to work hard and perform well, which shouldn’t come as a surprise at this point.

The Blackhawks had some momentum after tying the game up, and finally, the stars came out to shine. Patrick Kane entered the offensive zone with some speed and found an open Duncan Keith near the top of the left circle. Keith wound up and blasted one past the glove of Filip Larsson, who entered the game for Bernier at the halfway mark. Alex Nylander would pick up a secondary assist on Keith’s goal.

The Blackhawks were unable to further add to their lead in the second period, but they dominated the frame overall. After being outshot by the Red Wings 10-6 in the first, the ‘Hawks now led in shots on goal 17-15.

As the game went on, the Red Wings’ lack of depth became more and more evident. The Blackhawks were creating most of the chances in the third period, which gave Corey Crawford a reasonably easy rest of his night. After facing 10 shots in the first period, Crawford would only see 14 more for the rest of the game. Detroit made a late push with an empty net, but the Blackhawks defense held up to win the game 2-1.

With no goals scored in the third, the highlight of the period was Adam Boqvist’s through-the-legs deke. It seems like the Swedish defenseman has a must-see moment every game, and that continued on Wednesday night.

Boqvist didn’t record a point in the game, but he had multiple scoring chances and hit the post in the second period. He continues to demonstrate unbelievable offensive abilities for a defenseman.

While it wasn’t the most exciting game to watch, there were a lot of takeaways from Wednesday’s contest.

Alex Nylander played the entire game on the top line with Jonathan Toews and Patrick Kane. He looked comfortable right out of the gate, as he and Toews created an A+ scoring chance early in the first period. The trio of Nylander, Toews, and Kane generated 18 shots for and only five against, according to Natural Stat Trick. The 2016 eighth-overall pick finished with an assist, two shots on goal, and one takeaway in 20:44 of ice-time.

Brandon Hagel continues to be noticeable in just about every game he plays in. The Hagel hype train began at Blackhawks development camp this summer, where the former Red Deer Rebel was impressive in various aspects of the game. Hagel was named the second star of the game with one goal and a team-high four shots on goal.

Olli Maatta and Brent Seabrook were terrific all night long. While it was against a team made up of mostly AHL players, the pairing was on the ice for 20 shot attempts for and just seven against. There were rumblings all offseason that both players are too slow to play together, but that didn’t seem to be the case Wednesday night. It will be interesting to see if Colliton continues to use that pairing throughout the preseason.

With three preseason games in as many days, that’s a lot of action for the coaching staff to evaluate. After the game, Jeremy Colliton stated that the team will begin roster cuts sometime between now and Saturday’s game vs. Boston. Colliton didn’t give any information about how many players will get cut, but the Blackhawks need to start forming their 23-man roster. There are just 15 days until the season opener, so it’s time to cut the roster down significantly.

Keep an eye out for the Blackhawks roster cuts in the coming days.